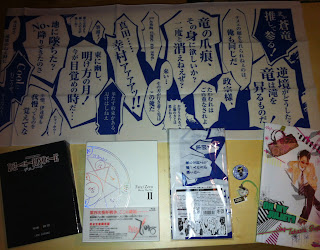 An unusual midweek batch of deliveries. Pictured is part one of Death Note, since Deep Discount was selling the two sets for under $8 apiece! $8 is unthinkably cheap for 20 episodes of a series of this quality and it was a good excuse to upgrade my PAL discs. Part two is still on the way (I hope).

Next to Death Note is the second Blu-Ray box set of Fate/Zero. It's gorgeous. My phone camera will never do it justice so there's no point in trying. From my merchandise order with Ami Ami I received two Sengoku Basara tenugui towels, both the Date Masamune edition covered in his unique catchphrases. One is for keeping in pristine condition. I'm not sure what to do with the other; at the moment it's on display, perhaps destined to end up in the kitchen. Fujii Takashi's Oh My Juliet! CD/DVD set completes the main acquisitions. It's strange to be able to buy a hit single from 2005 brand new without any problems. After having had the song itself for a while courtesy of iTunes, I now have the music video to accompany it. 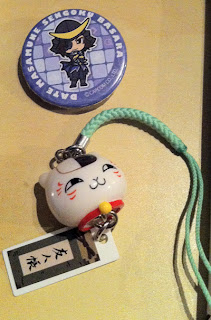 The picture on the right is a close up of the two smaller items: a Date Masamune tin badge and a freebie Nyanko-sensei charm. The charm is quite well made compared to the usual extras Yesasia pack into their deliveries. I wanted to buy more of the tin badges; tragically there was a purchase limit in place.

The final treasure was my much-awaited Sengoku Basara wall scroll (or tapestry, to use the 'Japanese' word). Pictured below, it features my favourite CG illustration from the whole series: the box art from Sengoku Basara 2 Eiyuu Gaiden ("Heroes"). Kojuurou! Masamune! Standing back to back! Capcom opted for white rather than black for the structural parts of the wall scroll, giving it a tasteful look and overriding my common sense about how much importing such a frivolous thing cost.

To make things even more perfect Anime on Demand have put today's episode of Magi online. Hurrah! There were some problems with the audio last time; it seems to have been a transient issue since today's episode sounded perfect. I checked the first episode again too, to make sure, and it was fine as well. 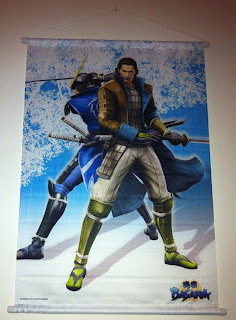