It feels so good to be back on schedule after a truly exhausting six months. This season was looking like a light one for a while, being comprised almost entirely of fluffy moe shows about giggly schoolgirls and a bunch of sequels. Somehow, though, I've ended up stuffing my schedule with a whole bunch of titles; it remains to be seen how many cling on for the whole season!

Now that Crunchyroll has devoured most of its competitors in the UK streaming scene, it looked as though they would be making a clean sweep of most of the worthwhile licenses this season - The Anime Network, Amazon Prime, Daisuki and Netflix have grabbed a few titles yet almost everything else is coming through Crunchyroll directly. The service really does represent incredible value for money for a fan in the UK these days.

Still, things are always unpredictable in the world of anime licensing. Right before I finished mopping up the last few first episodes to finish this post, Amazon announced that they would be entering the anime streaming business properly with a dedicated anime service named Anime Strike! At first glance it seemed like a pretty good deal; the Amazon exclusives each season are annoying, but for less than $5 fans could subscribe to have full access to the simulcasts and also the rest of Amazon's rather impressive digital anime catalogue. If anyone was going to rise up and become a true rival to Crunchyroll, perhaps Anime Strike would be the first to succeed!

Upon closer inspection, however, Anime Strike is a really, really bad deal. You have to pay $4.99 per month, which is comparable to Crunchyroll's subscription fee. And on top of that, you have to pay the $99 per year for an Amazon Prime account, making the true cost of Anime Strike more than $13 per month - around twice the price of a Crunchyroll subscription if you're signing up for anime alone and don't need the other Prime features. Meanwhile, Crunchyroll offers a free ad-supported service for those who can't afford to pay, along with more languages, more regions, scheduled simulcasts on a proper timetable and more content. The icing on the cake is that Amazon's Prime Video player is nowhere near as good as Crunchyroll's unless you're using it on Amazon hardware, while the market leader supports a huge range of devices to stream the anime you're paying for onto your consoles, phones and tablets. Paying twice as much for a tiny fraction of the content (Amazon Prime has two simulcasts compared to Crunchyroll's sixty this season) isn't appealing at all, and it feels as though doing so would send the message that Amazon's tactic of grabbing the worldwide streaming rights for new titles straight from Japan and releasing them only to a small subset of regions is acceptable. It's not acceptable. It encourages people to pirate anime.

Thankfully Anime Strike is US-exclusive at the moment (hello, region locking!) and if the online reactions are representative of Prime customers' feelings on the matter it doesn't look as though it's going to be a roaring success over there. Perhaps it will be rethought before daring to step outside its home turf to be steadfastly ignored by the rest of the anime-viewing world. 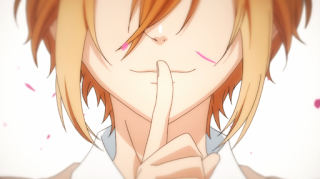 With my commentary on that brand new drama over, I'll move on to my first impressions! The ongoing titles I'm still following are ALL OUT!, March Comes In Like A Lion, Nobunaga No Shinobi and Mobile Suit Gundam: Iron-Blooded Orphans. Everything else is new.