Last week (Saturday 6th October) I attended the fourth annual Japan Matsuri (第四回ジャパン祭り) in London. This year, the event was held in the middle of Trafalgar Square with a stage set up beneath Nelson's Column. We'd missed last year's Matsuri (held at County Hall) due to family commitments, so in this summary I'm going to be comparing everything to the first two.

The weather the previous day had been awfully wet. Miraculously, on the day of Japan Matsuri, the skies cleared completely and the sun shone down all day long. We had arrived before the 11am start time deliberately to scout the area before the crowds arrived, only to discover that the new venue had some stricter rules. Visitors weren't allowed to enter Trafalgar Square at all until the gates were opened. We peeped inside and read the slick pamphlets we were given. A small crowd of eager people gradually gathered, several of whom were dressed for the occasion in beautiful yukata. 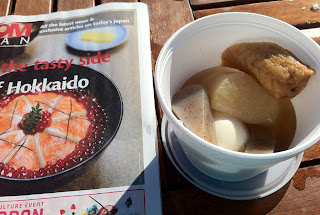 Having had some festival experience previously we knew that the first thing we should do once we were allowed to enter was to ignore the stage events and head for the stalls around the perimeter of the area. We had come hungry. I picked up some oden early on (pictured).

Most festival staples were present in the food stalls, with okonomiyaki, nikuman, yakisoba, bentou, dorayaki and maccha ice cream on offer. One type of food notable for its absence was, strangely, fresh takoyaki. The takoyaki stands at the first two Japan Matsuri events had received a lot of interest from attendees and here they were all missing. In their place, several of the larger food stalls were serving pre-prepared takoyaki deep fried to order. It's not the same thing at all, so my takoyaki-loving partner went without his favourite festival treat this year. I can only presume that the fresh takoyaki stalls had run into problems caused by their relatively slow service (they require special equipment and couldn't keep up with demand swiftly enough in the past). It is a shame that it wasn't possible to compensate for this by adding more vendors to spread the load. 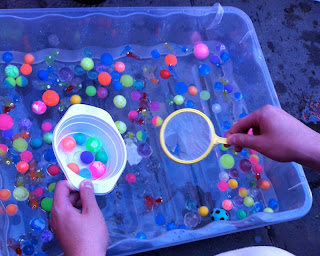 Another thing I noticed was less variety in the non-food stalls. The early Japan Matsuri events had dabbled in art displays, samurai armour costuming and there had been exhibitors selling books, magazines and merchandise. There was significantly less of that this time. Perhaps the proximity of the Piccadilly area and its Japanese bookshops was a contributor to this; still, I doubt many of the casual visitors were aware of JP Books, Mitsukoshi and Japan Centre a short walk away.

While the independent stalls had taken a hit, various Japanese associations had taken up the slack and added some traditional games to the list of activities on offer. Kingyo Sukui was my favourite. As the picture shows, real goldfish were replaced by bouncy balls, presumably to avoid problems over animal rights (the organisers stoically continued to call it Kingyo Sukui anyway in Japanese, or Net The Flotsam on the English signs). The prizes were humble with the best incentives available for scoopers who managed to catch 20 or more balls in their bucket. We failed to achieve this and walked away with some penny sweets and smiles on our faces. Other traditional activities on offer were making origami kabuto, yo-yo water balloons, chopstick 'races', calligraphy and a huge 'manga wall' outside the National Gallery. People were encouraged to draw their own manga on the wall for others to enjoy, so it of course immediately turned into a collection of messages in languages from all over the world accompanied by doodles of various anime characters. I liked the Fullmetal Alchemist reference someone had sneaked in next to Gintoki in my picture below. 13th October 2012 is a significant date in the series so they'd added the famous message from Ed's pocket watch as a subtle nod. 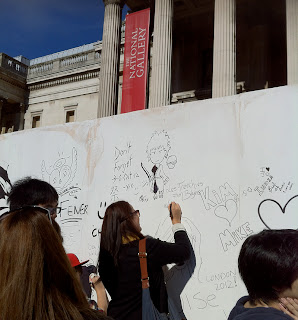 There probably wasn't that much space for a larger number of stalls in Trafalgar Square. When Japan Matsuri was held at Spitalfields it was able to spread traders through the labyrinth of passages and open spaces. Here, they lined most of the perimeter of the area. The famous fountains, statues and staircases dotting the area this year likely served as annoying barriers when it came to assigning additional space to exhibitors. The martial arts stage was a victim of the space constraints too; it was crammed in a corner and unless you were in the front row it was almost impossible to see what was happening.

Owing to the compact venue, even though we didn't settle to properly watch the events on the main stage until a couple of hours into the event we were able to enjoy the stage events from the outset. The organisers following up the opening ceremony with a pair of taiko performances and two choral medleys so the people buying food at that stalls could still hear everything that was happening. The acoustics in Trafalgar Square were surprisingly good! The noise generated by the early performances probably also helped draw in tourists from the surrounding area as the small crowds gradually began to swell. I'm afraid I can't differentiate between taiko patterns but the choral singers covered classic Japanese pop songs such as Shounen Jidai and Jupiter, along with a few staples Studio Ghibli fans would recognise.

Once we'd finished touring the stalls, it was early afternoon so we settled down on the steps opposite the stage to watch Ichikawa Hibiki and Akihiro in a lengthy Tsugaru-shamisen performance. The artistic appeal of shamisen is something that is lost on me, but Mochida Alika also participated with some minyou singing which was lovely, really drawing the whole thing together. Mochida has appeared at Japan Matsuri before. I recorded a short (and very wobbly) video to capture the experience:

She also taught the audience to participate in one of the folk songs. British reservedness was in evidence everywhere we looked. 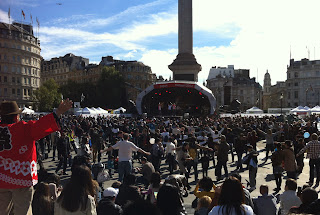 After the shamisen, there was an interlude for some Radio Taisou! NHK had brought Tago Hajime and two flexible assistants to London to coax the British festivalgoers through some exercise programs set to the music from NHK's radio calisthenics series. This particular event had the Japanese community on Twitter in stitches, as it's not really the kind of thing you'd see at a traditional culture festival at all - yet it's quintessentially Japanese and a surprising number of visitors became nostalgic watching it.

From our vantage point we had an excellent view of the crowd as the day went on. There were normal tourists mixed with local Japanese societies and people in martial arts outfits, cosplay, Lolita costumes, yukata and happi. Some people chose to blend traditional London punk hairstyles and makeup with Japanese festival wear. If I was more skilled at photography I could have had a field day taking pictures at Matsuri.

The stage events continued with some very young children demonstrating Okinawan Eisa dancing. Some of them returned a little later to perform a Yosakoi-soran dance (one of my favourite stage events every year). In between the dances by the younger participants, there was a strange stage event: Lolita Fashion by the Tea Party Club. I have to say that I found this one quite disappointing; it seemed to be more for the club itself and its participants than for the wider audience. One of the people in my party had spotted a few of the girls wandering around in Lolita dress earlier in the day and when she asked, I told her that the stage event would explain the style to her. However, after the fashion show had finished she was even more confused by the phenomenon than before. There was no clear explanation, just a long parade of pretty young girls in very expensive outfits, each with a similar-sounding name. If they run their fashion show again next time I'd prefer fewer girls on display and instead more description of the quirks of each type of outfit, to make it relevant to the non-cosplayers in the audience. 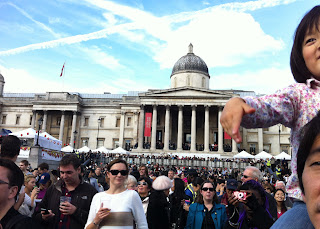 The final stage event we enjoyed at Matsuri was Nodojiman. As the regional subtitle 'The J Factor' implies, this is a live karaoke contest on stage, where a batch of hopeful local singers compete to win extravagant prizes such as flight tickets and vouchers. The rules require that the songs chosen must be in Japanese, so there was a range of skill on display from enthusiastic amateurs energetically grappling with Japanese pronunciation to native speakers whose main challenge was shyness. I recognised a few performers from previous years. Every selected singer gave it their best shot and performed beautifully for the crowd, so much so that it was genuinely difficult to guess who was going to win until the results were announced. I agreed that the chap who ended up triumphing had sung very well and earned his victory. 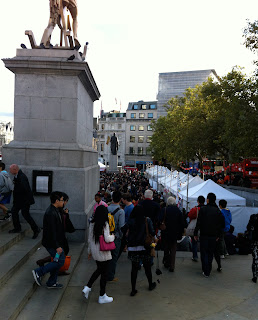 We decided to leave mid-afternoon as we had other things to do that day. Although I always want to see more stage events than I'm able to, by afternoon the queues for the stalls at Matsuri are intense and the crowds had become huge; a testament to the popularity of the event. Festivals in Japan are exactly the same when it comes to busy crowds swarming the stalls later in the day. Of the events we didn't get to see, the Nihon Buyo, Bon dance and Suzuki Naomi music show were the most regrettable omissions. The quirky retro music group Frank Chickens were also present, and after their fantastically memorable performance at the very first Japan Matsuri it was a shame we couldn't stay longer to see how they did three years later.

The final picture shows a glimpse of the teeming crowd around the food stalls from the relative peace of the way out. As I mentioned before, it felt as though there were far fewer stalls in general than there had been in previous years. Japan Centre had a very large area to themselves and a lot of the regulars such as Yoshino, Wagashi Japanese Bakery and Yakult were present, but the crowd could easily have supported two or three times as many food stalls alone and there was less variety than there had been in the past; I remember enjoying shiruko and other tasty treats in previous years. Hopefully as the event continues to be successful year after year, we'll eventually see it taking place in a venue large enough for the crowds it draws, with more and more exhibitors joining in to sell diverse foods, drinks and crafts.