I think that this series takes the prize for being the most depressing waste of an awesome concept in recent history. Here's the official synopsis:

"I will decide my own path!"

The prosperous island of Regalo in the Mediterranean Sea is protected by a vigilante group called "Arcana Famiglia." The group's members are granted special powers through contracts with the "Toracco". Felicitá, the only daughter of the Papa and head of the family, has her mother's beauty as well as superior skill with knives. Though she was raised deep in the island, at age 16 she takes her first steps into the spotlight as a member of the family. Then, at her birthday party, her father, Mondo, announces that he is retiring. He declares a competition to determine his successor - and Felicitá must marry the winner. Felicitá enters the competition herself, determined to win so that she can decide her own path. The curtain will soon rise on the battle that will determine her fate!

So in summary, La storia della Arcana Famiglia is a fighting tournament series with a heavy mafia influence, with a romance subplot and various superpowers thrown into the mix. It's also blessed with attractive characters of both sexes, pretty good music, and it's based on a reasonably popular otome game series.

It was therefore difficult to understand how it managed to end up being so average.

The main culprit is probably that the tournament didn't actually begin until the very last episode, so of course there wasn't much time to get pulled in, and most of the characters got so little time to develop that they felt flat and redundant. The two least interesting male love interests received the bulk of the exposition with the rest reduced to being simplistic stereotypes; Pace really likes lasagne, Luca is a bit of a stalker, Debito can't keep his hands off women, and so on.

Expanding further on that last point, for a series based on an otome game most of the male characters seem oddly detached from romance in any way (and indeed, detached from most things other than brooding and running around on pointless errands). There's no sense of any exciting mafia-style menace from the majority of the cast, and indeed most of the conflict in the series only existed because the gangsters tended to dither like schoolgirls every time there was a problem instead of decisively working to solve it. I ended up liking Debito the most on the grounds that he occasionally acted less like a squeaky clean popstar than the leads. It helped that he also looked sharp in a suit with his hair slicked back. 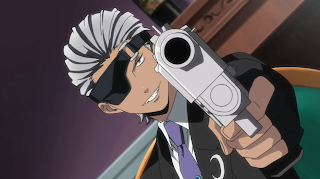 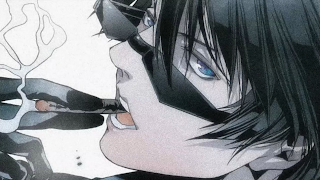 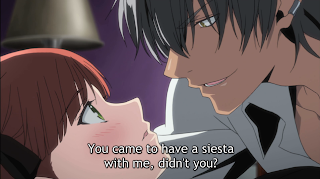 Ultimately though, the series rarely attempted anything more ambitious than this: 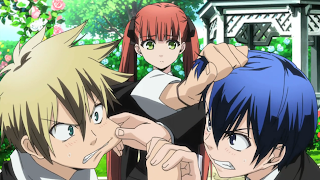 I watched all 12 episodes in the end. La storia della Arcana Famiglia was definitely the weakest of all of the shows I followed over the summer, and after taking a break for my summer holiday it was the last one I came back to when I had to catch up again. It's allegedly getting a US release next year, so I'll pick it up cheaply that way at some point to add it to my library. At least the box art should look very nice, because the aesthetics are one of the areas where this series held up well. 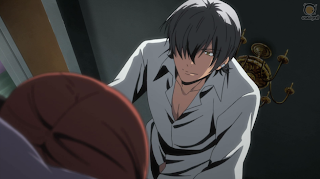 La storia della Arcana Famiglia is streaming as a simulcast through Crunchyroll, and it's available for viewers in the UK if you want to see for yourself.
at 4:34:00 pm