Today will go down in anime history as the momentous day that Kintama ended. I won't spoil the final episode; check it out for yourself on Crunchyroll if you want to see what went down between our hero Kin-san and the pretender Gintoki.

It's always sad when a good series ends, especially when it had only been on the air for four episodes after an abrupt finish earlier in the year. 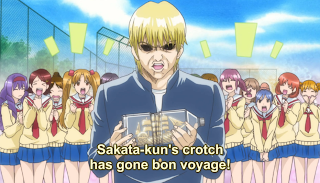 With the creators being the way they are, Kintama was soon followed by the a completely unrelated short-lived high school romance series Mantama. Mantama was more interesting than most examples of its genre, featuring more cuteness and innuendo in its brief ten minutes of existence than many romantic comedies manage across entire seasons. I think it may have set some new record for the sheer number of diverse parodies in its opening sequence as well. I was ready to throw all of my support behind this new show, but staff weren't finished toying with my heart.

Ultimately, I still have absolutely no idea what's going on this season. It looks as though things are back to 'normal' at last next week with Gintoki restored to his proper place in the opening and the Gintama' title back in place, but when this renewal was first announced there was mention of it airing a mixture of new episodes and reruns. Will next week be the first proper Gintama' episode of the new series, or will it be an old classic resurrected from the vaults to buy time for them to animate the next arc? Whichever the case, I'll be watching. 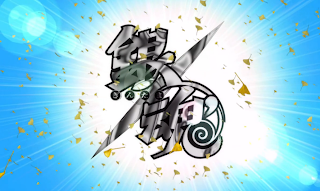