After enduring hours of amused chirping from Twitter following its initial airing today, I rushed home from work and settled down to watch the first episode of the new series of Gintama Kintama. 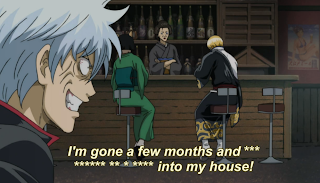 It's great to have Gin back with new episodes coming, and even better to be in sync with the Japanese airings! Gintama Kintama is a popular show among my demographic and its abrupt finish earlier this year was a blow. Nothing similar filled the hole it left.

In typical Gintama Kintama style, Gintoki frequently refers to the six month gap between episodes during the course of the episode, in between making funny faces and referencing every other possible Jump series he can cram in. He makes it sound as though the six month hiatus was deliberately planned, and during the time he was vaguely 'away', he's been mysteriously replaced by his mildly creepy doppelgänger, Kintoki. It's a fairly standard plot in science fiction shows, but it's probably going to end weirdly. This show always does. 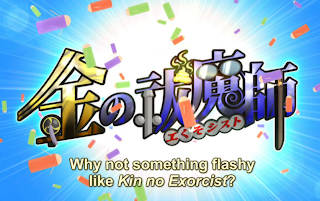 Predictably, this episode is the first in a longer arc and it was more of an introduction than anything else. I can't judge yet whether this will end up as a very short story and is all tied up within a few episodes (as they usually are) or not - it's always hard to tell as the series flips between seriousness and absurdity too quickly to get bored. 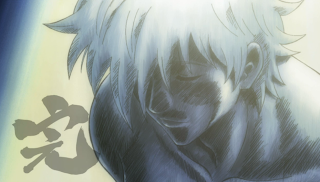 When Sacchan (briefly) appeared, I suddenly put two and two together and realised that she is voiced by Kobayashi Yuu. I had always wondered about why I found her so annoying when she was in the manga version but oddly awesome when she started to talk; now it all makes sense. Oddly, Kintoki isn't voiced by Sugita Tomokazu. I guess that would be too much.

Looking forward to the next episode! The way that this series has been resumed with a bang has really got everyone talking - even Yahoo! News is interested. 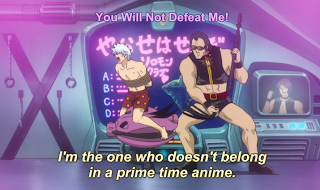 Gintama is streaming as a simulcast through Crunchyroll, and it's available for viewers in the UK. Although it's a long-running series, its format as a comedy means there's no need to watch the whole thing in order - though if you want to, Crunchyroll has the older episodes available to viewers as well. Lots of people watching the streaming version improves the likelihood of a future subtitled home video release in America (for us to import)!
at 10:05:00 pm