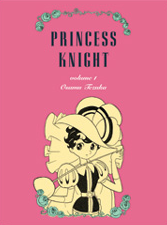 "Set in a medieval fairy-tale backdrop, Princess Knight is the tale of a young princess named Sapphire who must pretend to be a male prince so she can inherit the throne. Women have long been prevented from taking the throne, but Sapphire is not discouraged and instead she fully accepts the role, becoming a dashing hero(ine) that the populous is proud of.

The playful cartooning style of Princess Knight is comparable to that of Disney, à la Snow White and the Seven Dwarfs. Considered by many as one of the first major shojo works, inspiring comics for girls such as Revoluntionary Girl Utena, Cardcaptor Sakura and Sailor Moon for generations to follow. A rare shojo property from the godfather of manga, Princess Knight has been long considered one of Tezuka's most popular works worldwide."

I have always viewed Princess Knight (Ribon No Kishi) as one of the holy grails which belonged in my manga collection. Its pedigree is impeccable; coming from the pioneer Tezuka Osamu himself, it's an early shoujo series loaded with fantasy, cross-dressing and heroics. When Vertical finally announced that they had acquired the series for the US and would be translating it into English, released across two deluxe volumes, I was naturally thrilled.

It was therefore unexpected that after reading the two Vertical books,I came away with mixed feelings. I can't fault the English version specifically at all, aside from one confusing translation error (the lead character is referred to with a feminine pronoun by a character who is later shocked to discover that Sapphire actually is a girl - it's a key plot point so the error is frustrating). The translation reads well overall and the dated feel of the dialogue comes through intact, and a lot of the plot elements which don't make much sense were directly brought over from Tezuka's script itself. For example, the story goes to great lengths to place itself in a fantasy world, with regions given simple names such as Goldland and Silverland. However, when characters are banished, strangely they are sent to actual countries (Italy and Africa). I found this quite jarring; even if Italy and Africa are supposed to sound exotic and far away, since we don't actually know where the fictitious countries the cast come from are supposed to be it's impossible to get a feel for how ominous the punishments actually are.

The script itself is one of the major stumbling points for me. Events go back and forth at a breakneck pace, and nothing is ever dwelt upon for more than a panel or two. Important characters die - the body count is actually rather impressive for a shoujo story - and fall in love abruptly, and yet nothing feels as though it has any gravity. The main romance is the only one which is given any time at all to develop as every other character is susceptible to falling in love at first sight and then acting as though their life is over if things don't work out.

I have a feeling that Tezuka revised the storyline a number of times during the course of its original run, effectively making things up as he went along. Since this edition is based upon a later version than that which was originally serialised it's impossible for me to say whether this was originally the case or whether it was subsequent revisions which harmed the flow. The plot seems to change direction far too often, and characters who appear significant are frequently introduced then dispatched with no fanfare whatsoever. I found some chapters were quite difficult to read as a result of this pervading air of chaos.

The second problem with Princess Knight is more of an issue; the characters. It's a fairy tale, so most of the characters are intentionally simple and stereotypical. I accept this. But what I find harder to accept is how the reader is expected to root for Sapphire herself. She's a born victim, sobbing bitterly about how unfortunate she is at every opportunity, and although she has a support network so vast it would make anyone jealous, she doesn't seem concerned at all by how many people she inconveniences or how many lives she ruins in her endless quest for self pity. The manga was originally published in the 1950s, but I think that had I been a young girl in Japan at that time I'd have harboured exactly the same misgivings as I do now about Sapphire's character. Sapphire has also got a dreadful habit of leaping to completely irrational conclusions and getting herself into trouble for absolutely no reason, which she always attributes to bad luck rather than the result of her own foolishness. Most of the struggles she faces in these two volumes could have been solved instantly in the first place had she stopped dithering and weeping long enough to explain herself. Her Prince Charming fares little better and comes across as a simpleton until the later chapters, when he suddenly becomes more heroic.

Much praise is given to Princess Knight's treatment of women in an age where shoujo manga was written by men and women were expected to be submissive and gentle, however this was one of the aspects where I felt the books were weakest, disappointingly. The humans in the story stick to very rigid gender definitions, with a strict male/female divide and allowing social norms to dictate everything about their lives. Even a rebellion by the court ladies doesn't go far in challenging these ideas. As for the main story, Sapphire is only a 'princess knight' at all because she was born with both a male and a female heart. It's implied that normal people who only have one or the other don't have any way to choose their path in life. Sapphire is shown to be an able fencer while she has a male heart but as soon as it's taken away she becomes a feeble creature, inexplicably unable to draw on the very same muscles and training she possessed moments earlier to continue the fight. If anything, Sapphire is closer to being an early example of the current 'moeblob' archetype; she's a simpering, cutesy damsel in distress rather than a strong female role model to inspire young girls.

Far more interesting are the supporting cast. They are not blessed by Sapphire's superhuman luck and as a result tend to be more well-rounded and intelligent, and over the course of the story the number of characters who overcome the limitations of their physical gender increases. Hecate, the daughter of one of the main demonic antagonists of Princess Knight, was probably my favourite. She represents a much more positive female ideal by being both powerful and witty, with a strong will of her own. While Sapphire sits back and lets things happen to her, Hecate actively works to change her own destiny with no help from her cruel mother or absent father. Indeed, the demons in the story don't have hearts at all, female or male, and therefore conduct themselves in a much more liberated, natural way. If the story had been about Hecate, who proves that Tezuka could write strong female characters when given the chance, it would have been significantly more enjoyable.

Ultimately, Princess Knight failed to impress me as a work of fiction. Perhaps my expectations had been too high, and perhaps having read several later Tezuka series first I'd been spoiled by his more nuanced stories - his work is experiencing something of a revival in the English speaking world lately so there's a wealth of truly excellent books waiting to be bought. I don't regret purchasing Princess Knight, though, because for all of its shortcomings it gives a lovely glimpse into the manga world of its time.

Every single panel of the tale is delightfully illustrated. It's plain to see that Tezuka was using a great deal of reference material when it came to anatomical details, particularly for the non-human characters. There is also no printed screentone to be found, yet the artwork is just as detailed within the confines of its style as modern works. Every last texture and pattern is painstakingly rendered in ink by the artist and his assistants, and the result is stunning. One thing that I found less appealing was when he'd 'borrow' (in the most generous sense of the word) entire character designs from famous western comics of the period, from Popeye to Walt Disney cartoons. Because I grew up familiar with these old caricatures, seeing them reused like this is surreal, giving the manga overall something of a collage feel. It also gives it less chance to have its own identity, and some of the sillier gags clash with the cute, rounded designs Tezuka came up with himself.

When all is said and done, I don't think that Princess Knight is a classic story, and I'm not sure I would recommend it today to either regular manga fans or a younger modern audience; it's dated and the plot too complicated to feel completely satisfying. However, these two books shine as historical relics, and for anyone curious both volumes of Vertical's translation are well worth the asking price at Amazon.
at 8:10:00 am