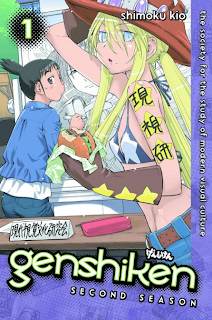 It's been five years since the last volume of Kio Shimoku's Genshiken was published in English. Coming back after such a long pause, there was a danger of disappointment caused by heightened anticipation. Thankfully, Genshiken's 'second season' lived up to the greatness of the original series and didn't miss a beat.

While I was waiting to read this particular volume (my partner got to it first), I was extremely amused to hear him abruptly exclaim "Madarame as the uke?! That's ridiculous!". I must note that my partner is not actually a fudanshi himself, merely a very understanding individual who has perhaps spent one too many evenings debating whether Sengoku Basara's Uesugi Kenshin x Takeda Shingen is a valid pairing (as opposed to his preferred Shingen x Kenshin). Hearing him getting so swept up that he started arguing with the book brought a smile to my face.

As it turned out when my turn came to read it, this volume is very heavy on fujoshi, which had been the focus of the plot a few times in the original series. It's funny to see how the current famous trends in the otaku world filter down into the pages of Genshiken; each generation of the titular club brings with it a very different feel. Of course, since this is the compiled tankoubon release which is subsequently further delayed until its English edition, the trends are always a little bit behind what's currently making headlines. The series parodied in the story are similarly affected; here references are made to shows such as Bakemonogatari, Nisemonogatari (which hadn't yet been animated at the time), Fullmetal Alchemist and Sayonara Zetsubou-sensei.

With most of the cast having graduated at the end of the first series, Genshiken's 'second season' requires that some new characters join the club's ranks. Series veteran Oono and prickly club president Ogiue successfully find three new recruits straight away, joining existing members Sue, who had been a popular minor character in the first season, and the indescribably annoying Kuchiki (it's difficult to understand why nobody has thrown him out yet, even if it's true that there's always someone like that in a group).

One of the fun aspects of a realistic series like Genshiken is seeing small reflections of your real life friends in the cast. I'd always been a little disappointed that nobody fit me that well before, but the surly new girl Yajima takes care of that, at least in terms of attitude, reminding me a little of how I might have been at that age had I actually been around other people. She even likes the same genres as I do. Yajima is accompanied by an irritating, cute and enthusiastic fujoshi, Yoshitake, and the dazzling Hato who spares no time in becoming the main focus of the plot for the bulk of these chapters. If the adorable Madarame was the de facto moe character in the original Genshiken, his replacement is every bit as promising so far. Madarame himself does occasionally appear, as do most of the other characters from his generation; fortunately the manga is careful not to let them completely sweep the reader's attention away from getting to know the new cast.

One thing I did find strange in this volume is the initial reaction of the fujoshi characters to an otoko no ko who appears. Of all of the people I'd expect to understand attractive young men in drag, fujoshi would come close to the top of my list - it's not possible to walk past a single shelf in K-Books over there without seeing loving depictions of men in dresses! While there are often wry comments made in fan circles about fujoshi being unable to appreciate actual gay men due to the unrealistic nature of their fantasy material, everything I've seen in real life within the subculture has contradicted this stereotype; indeed I've seen a number of otoko no ko myself (not to mention fudanshi) and found nothing about them to be particularly surprising. When a man visits a BL space at a doujin event, the usual reaction I've observed is actually flustered, nervous excitement rather than the thinly-veiled disgust seen here. It's close to the reaction I receive as a foreigner when I show my face at a small event myself...

Anyway, the issue gradually settles down and only Yajima seems to have a problem with it thereafter, which is at least partially due to her own insecurity about her femininity. Perhaps I am reading too much into the gender politics of an otaku comedy manga.

I have to give special credit to Oono for saving the day with her ability to verbalise the complicated thoughts everyone is having. She doesn't have a strong presence most of the time, focusing on a hobby I find bothersome (cosplay) and smiling vapidly, but when she gets fired up she comes out with some fantastic lines which give an insight into the straightforward way she rationalises the crazy world around her.

Speaking of lines, one of the struggles I have reading Genshiken is that although the English adaptation is very good, I often need to think in Japanese and work out what they are actually saying to find something funny. I should probably be reading the Japanese edition in the first place when I'm having to mentally translate names and gags back into Japanese to pick up the reference.

One of the biggest problems for this is Sue. She's a foreign transfer student who stands around in the background with no consideration of social norms and occasionally reels off famous quotes from anime. Unfortunately, with this being the English edition, she's quoting them in English, and I don't always make the connection as well as I could between the two languages (especially as some lines have to be tweaked to even begin to make sense in English at all). The liner notes at the back of the book were the only way I realised that the single line "Dapple Kicking Beam" was a deliberately obscured reference to the song "Ringo Mogire Beam". There's no official translation of the title that I'm aware of, so obscuring the real name of the song would have been less confusing than doing so to an arbitrary English translation.

Sue's character in general is one of the weaknesses of the manga; as a guest character in the first series she was excellent. Here, given much more exposure, she's not interesting enough to be much more than a walking, cosplaying punchline for gags, which is a shame as it wears thin from time to time.

All in all, this volume succeeds in being more of the same, which is high praise in the case of Genshiken. The art is better than ever, the observational comedy is still there, and the cast has expanded to incorporate a wider variety of quirky otaku. There's even some mild dabbling in an unexpected romance subplot which I have to admit, I rather enjoyed. The second volume cannot come out swiftly enough.

And I'm perfectly happy with Madarame as the uke, as it happens. Reversible pairings are interesting!
at 7:10:00 pm