After Gintama' mysteriously ended with an apology episode a while ago, its presence in my life had been sorely missed. The series seems cursed, from the aborted English language release of the manga to Sentai's stony silence on more DVDs, and the actual anime has stopped and resumed in Japan more than once now with very little explanation. And that's even without mentioning the incident where airings were suspended due to defamation of an unnamed (but pretty obvious) political figure.

However, its popularity hasn't waned and suddenly Gintama is coming back once again in anime form (and with a movie in the near future to boot). It seems that the staff have not missed an opportunity for some of their usual mischief in the process.

The official television listings are all playing it straight but instead of Gintama, they're showing a listing (and logo) for Kintama. Furthermore, the synopsis published for tomorrow's episode casually replaces every instance of Gintoki and Gin-san with Kintoki and Kin-san.

Even the official series homepage has removed our hero from existence and installed his dashing blonde replacement front and centre. 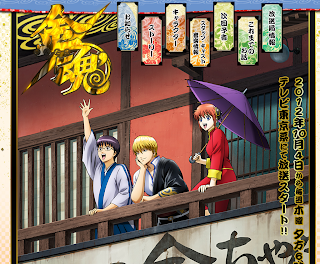 Before Gintama' was abruptly terminated, its last next episode preview (which was subsequently revealed in the actual final episode to be a lie) was for the adaptation of the infamous Kintoki arc, so it seems that they eventually came through for us. Since the manga was cancelled I have no idea how long this arc is actually going to be.

I'll be eagerly watching on Crunchyroll tomorrow to see what happens next in the melodramatic roller-coaster that is the Gintama TV series.
at 8:05:00 pm