News: Nozomi has a new announcement to announce! 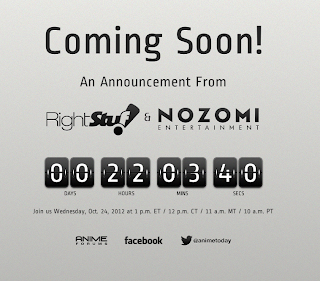 RightStuf's licensing arm, Nozomi Entertainment, is doing it again! A mysterious countdown timer has appeared ready to reveal a surprise tomorrow. The last one of these turned out to be Rose of Versailles, so this is likely to be something good too. With the label being Nozomi it should be a premium release with some nice extras rather than a niche title for their barebones Lucky Penny label.

I really hope it's not a rescue of an older title from another company. Even if it is though, I'm glad that Nozomi make their announcements into events like this rather than stealthing new shows into their regular solicitation press releases. It makes it feel as though every title matters, and in a world where every anime is somebody's favourite show that's definitely a good thing. Kudos to them too for not dragging it out too much. One day is about right to build hype without getting carried away.

Anything which is still awaiting its sequels in the US (xxxHolic, Kyou Kara Maou, Saiunkoku Monogatari) would go down especially well, as would one of the missing noitaminA shows. Surprise me in a good way, Nozomi!
at 8:06:00 pm