Note: Series which have no legal stream to the UK aren't included. Magi is also absent as it's being streamed on a delay, but I'm anticipating that, like Kintama, it will be sufficiently interesting to warrant its own post later on. 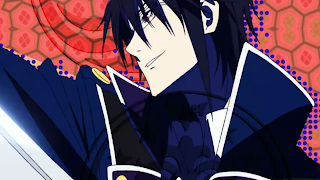 Overall, my impression so far of this season's anime offerings is that there are an awful lot of sequels to things I wasn't watching originally, so once those and series which obviously have no appeal to me are excluded there aren't that many new shows.

It's so frustrating when anime series have such antisocial titles. Doomed to being impossible to search for online once its no longer current, this is also going to be annoying to find in shops when the DVDs come out.

I have very mixed feelings about K so far and I'm going to need to keep watching. The first episode was a jumble with characters and world-building elements being thrown at the viewer rapidly, in between scenes of fighting and explosions. There was a momentary pause in the chaos halfway through the episode, which ended up being a build up to the climax and more of the same.

The episode ended very strongly though, and that's where it counts, because I'm now eager to see what happens next. Aesthetically the show is quite strange; it has very appealing character designs (it's plain that they want to court a certain audience) and blues and greens dominate the visuals, giving the whole show a very cool, detached feeling. 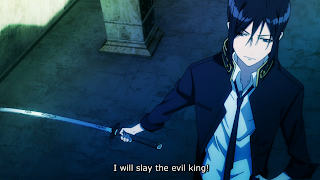 K is streaming as a simulcast through Anime On Demand, and it's available to the UK.

Shin Sekai Yori had a very interesting concept. The promotional art for it looked quite cute, though, and I always have reservations when a school setting is used. It turns out that I needn't have worried; this is shaping up to be a fascinating and slightly creepy take on its premise and the series doesn't waste any time in setting things up.

Unlike K, the story here is easy to follow. A young girl is reunited with her old classmates, having finally been able to move up from her original school after her powers awaken. She'd been a late bloomer and this had caused her to become insecure, but it had also given her the chance to notice that there are what seem to be a few troubling secrets lurking beneath the veneer of her tranquil country life. The story is told in a very Japanese way; despite being set in the distant future, there's a nostalgic atmosphere and many characters behave in a way that's evocative of folk tales. I'll definitely be watching the next episode once it is broadcast. 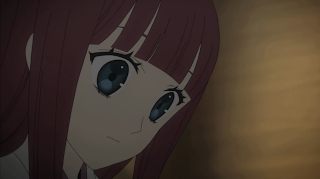 Shin Sekai Yori (From The New World) is streaming as a simulcast through Crunchyroll, and it's available to the UK.

Zetsuen No Tempest (Blast of Tempest)

I loved this. Zetsuen No Tempest had stood out initially as one of the more interesting prospects for Autumn, and its Shakespeare-tinged story of magic, revenge and conspiracies didn't fail to draw me in. The characters are interesting and a little more complex already than the usual naïve schoolboys which populate other shows; they're also nicely designed and easy on the eyes. The music is good too, and the anime direction itself is handled skilfully by Bones. 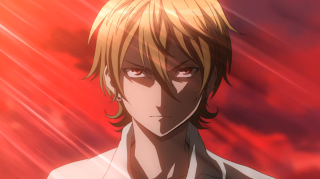 Zetsuen No Tempest (Blast of Tempest) is streaming as a simulcast through Crunchyroll, and it's available to the UK.

Owing to the relatively small selection of palatable titles this season (especially with Magi still unavailable) I decided to give the ridiculously-titled BTOOOM! a try as well. The synopsis gave me a feeling that it wasn't going to be my kind of thing from the outset. It seems to have a positive fanbase, though, I felt that it would only be fair to give the first episode a look.

In truth, this really isn't to my taste. The show's premise is certainly good - a game-addicted NEET is dumped on an island with some bombs and forced to fight other bombers in a battle to survive, in a throwback to Battle Royale. To add a twist reminiscent of the current hit series Sword Art Online, the struggle turns out to be a real life version of the squad-based game he had been playing back at home; a mainstream online squad shooter like Halo or Counter-Strike only with the complication that various types of bombs are the only weapons available. There's nothing original here but it's a setup which lends itself well to some mindless, explosive fun.

Unfortunately the main character is a completely unlikeable idiot, and the supporting cast seems little better so far. So far all he's been shown to have going for him is that he's a little bit cunning when it comes to his favourite game, and he uses this skill to outsmart what must be the most stupid villain on the entire island after dithering uselessly for far too long. While it's usually cruel to condemn characters from the comfort of my living room for not being quick on the uptake in life and death situations, it's important to note here that the BTOOOM! cast is unusually, implausibly poor at basic deduction. The next episode promises some semi-interesting backstory for the half-naked girl who appeared right at the end of the episode. I think I might avoid continuing further for now. 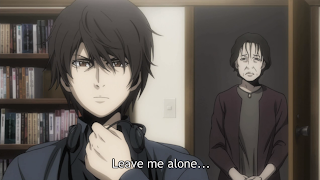 BTOOOM! is streaming as a simulcast through Crunchyroll, and it's available to the UK.

From what I've seen so far, it looks as though my regular Autumn 2012 anime streaming schedule will end up like this:

An unbalanced schedule, even more so because I'm actually behind with Sword Art Online. I'll probably spend Friday catching up on Thursday's shows since I'm usually unable to watch much on that particular evening.
at 2:45:00 pm