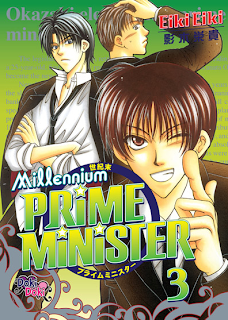 A confused love triangle is messing up the politics of Japan!

Millennium Prime Minister (Seikimatsu Prime Minister) is a light four volume romance series by Eiki Eiki. It was originally released from 1998 to 2001, hence the titular 'millennium'. In the afterwords, she explains that it was supposed to end in 2000 with the third volume; things didn't quite go to plan.

Coincidentally it was in the year 2000 that I first became familiar with Eiki Eiki's work. Rather than discovering her through her properly published manga, it was actually through reading an Inuyasha doujinshi that her artwork originally caught my eye. I still have that book in my collection today, along with a number of more recent works produced by Kozouya, the doujin circle run by Eiki Eiki and her friend Zaou Taishi (Tsuda Mikiyo's doujinshi-publishing alter ego).

Having been following her doujinshi career casually for over a decade, it was actually quite a strange experience to travel back in time to get to know one of the creator's older works. The artwork in Millennium Prime Minister is initially extremely rough. The female characters come across especially poorly with chunky, awkward designs.

It's almost unnoticeable as you're reading, but the art improves drastically as time goes by; when I reached the third volume it was up to the standard I was used to from early Eiki Eiki material. The lead character, Minori, gradually becomes more feminine and attractive over the course of the series. It's almost as though Eiki Eiki hadn't spent much time drawing women in the past...

The one aspect of this short series which pleasantly surprised me was the plot. At first, I'd assumed that this was merely a fluffy romance story with the government setting only there as an excuse to draw attractive older men in suits, playing off the artist's well-publicised political links in her personal life. The male politicians are certainly drawn appealingly and the first few chapters have no real plot to speak of, introducing a typical cast of characters with the corny gimmick that this new prime minister happens to be a good looking young man, surrounded by an equally young, very masculine entourage. When Minori, a typical schoolgirl, is dragged into the prime minister's world because he has decided he wants to marry her, it's both cliche and unwholesome (he's pretty much abducting her by using his influence and popularity).

This flimsy introduction eventually gives way to a surprisingly interesting longer storyline, which actually manages to include politics, comedy, drama, mild BL and the promised romance after all. Once I'd finished with the second volume I couldn't wait to pick up the third, then the fourth. Eiki Eiki is in tune with her audience and although the plot covers complicated real world terminology it's never thrown at the reader without ample explanation. It's even more impressive that it works so well given the cultural gap; the setting is of course based on Japanese politics (from over a decade ago!). The slight quirks are all smoothly explained thanks to the lead character being just as apathetic about government policy as most other schoolgirls would be.

Instead of taking the easy route and churning out something generic with the gimmick of an attractive young prime minister holding it together, the author worked hard to create a story which stands on its own and breathes life into its characters. If I had been told when reading the early chapters that everything was going to come together by the end in a satisfying resolution, I'd have doubted that assertion. As a result of Eiki Eiki's efforts I enjoyed this series more than I'd expected to, even as an existing fan.

One of the best things about the tankoubon editions of original manga by the Kozouya girls is that they come with plenty of bonus material and notes, and these are included in the English edition. There are always some interesting insights into the inner workings of the manga industry, as well as black-hearted parodies using the characters from Millennium Prime Minister itself. Tsuda naturally pops up from time to time in the bonus material too. I was pleased with the adaptation overall. The only error I spotted was one exchange where Kanata's name was given incorrectly in the translation, making the affected pages harder to follow than they should have been.

Millennium Prime Minister was published in English under Digital Manga Publishing's Doki Doki imprint back in 2009/2010. It's still readily available for purchase in physical form through sites such as Amazon UK (links to the individual listings: 1, 2, 3, 4). In addition, Doki Doki has made sample chapters legally available on eManga.
at 10:17:00 pm