We usually attend on Saturdays, but due to a prior commitment this time we had to shift our visit to the Sunday. Expo on Sunday had a very different feel to our usual Saturday trips. Perhaps in part due to the bitterly cold weather, there were no cosplayers at all on the way in with only a few dotted around inside when we arrived. We usually see quite a few on the train so I was a little concerned.

We were early enough to receive the goody bags that the first few rows of people in the early entry queue are treated to. As usual the contents were nothing to rave about, but rummaging through made the time in the queue pass quickly. There were some Yu-Gi-Oh! cards which I did not keep, some marketing nicknacks, the show guide with the top secret event information that's always so difficult to find online in advance when you need it, and a free DVD. Mine was By The Will Of Genghis Khan which looks pretty terrible. One of my friends was lucky enough to receive two DVDs in their bag - except both were Skate Or Die. I'm not entirely sure whether this was a blessing or a curse.

For some reason even if you have an early entry pass the organisers never seem to start anywhere close to on time, so despite being close to the front of the queue my party only gained entrance to the event hall at around 10:30 in the morning, thirty minutes after the official opening. The Expo hall was wonderful at that time of day, with clear space around all of the stands and easy access to chat to the various vendors. I did all of my shopping as quickly as I could.

At noon, we went to see the Anime Industry panel featuring Manga Entertainment, Kaze UK and MVM Entertainment. This lasted just under an hour. By the time we came out, the crowds in the hall had finally swollen to their usual levels and it had become difficult to navigate in the packed frenzy of people in inconvenient costumes scrambling for discounted models and merchandise. We stayed for a little while longer to see the remaining attractions, then went home. Next time, despite the risk of missing the anime panels as we usually do, I think we'll go for Saturday again if possible; there was a definite sense of fatigue among some of the attendees and even though the cosplayers had come out in force by noon the outdoor cosplay area was emptier than I've ever seen it before. The cold weather and longer convention (it wasn't always possible to attend on Friday in the past) seemed to drain their usual hardiness away.

I didn't see any Sengoku Basara cosplayers. One artist had a picture of Mouri Motonari on their stand and that was all.

One of the pleasures of Expo is picking items up in person to save on postage, and I purchased an appropriately large amount of anime. Not shown are the lovely complimentary posters we received from Kaze UK (Tiger & Bunny and Berserk) and Viz Europe (Blue Exorcist), nor the advance copies of Bakuman volume 16 and One Piece volume 65 which Viz had on their stand. Being able to buy things up early is always good fun. As usual, most of the independent stores were selling bootlegs rather than treasure worth spending money on. There's obviously some friction about this between the traders and indeed most of the handful of legitimate stores had distanced themselves from the problem, setting up prominent notices asserting that their goods were legitimate Japanese imports. 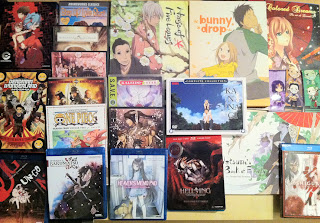 In the picture are DVD or BD sets for Un-Go, Deadman Wonderland, C: The Money of Soul and Possibility Control, Natsume's Book Of Friends season 1 & 2, Hellsing Ultimate I-IV, Shigurui, Kaleidostar's OVA, Bunny Drop, House Of Five Leaves, Kannagi, Hakuouki, Heaven's Memo Pad, Step Up Love Story (Futari Ecchi), One Piece season 4 part 2, Ristorante Paradiso, Croisée in a Foreign Labyrinth and Intrigue in the Bakumatsu - Irohanihoheto part 1. There's also an original art book and three doujin bookmarks from a French illustrator called Eternal-S. Her work stood out as we passed by the artist alley section of the hall so I had to take a closer look.

The NIS America box sets for House Of Five Leaves and Natsume Yuujinchou are even more stunning than usual since they have gorgeous textured finishes. I love them. The former came with two sets of DVDs (there was a recall due to an audio problem with the original batch so the replacements had been attached to the packaging). With the UK edition I already had, I now own a total of three copies of House Of Five Leaves.

That wraps up my personal summary of the event. I'm going to make a second post to cover the Anime Industry panel in more detail.
at 6:11:00 pm