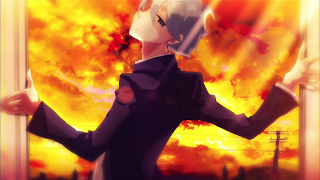 When aliens suddenly invade the world, Earth seems to be fighting a losing battle until Arikawa, one of the defense command staff, accidentally discovers a young man lying on a hill. Tests soon prove the impossible: this one teenager, Kakashi, has the power to defeat the attackers! Unfortunately, Kakashi has also lost his memory, and with it the knowledge of how to actually use his power. Moving Kakashi in with himself and his own commander, Shiro, Arikawa accidentally starts a strange triangle of emotions and relationships. A triangle that threatens the fate of the planet as Kakashi begins to question his own motivations!

From up and coming director Soubi Yamamoto, and CoMix Wave, who spearheaded Japan’s new wave of independent anime production, comes a film that turns The War of The Worlds inside out: THIS BOY CAN FIGHT ALIENS!

Along with their extremely successful acquisitions of popular anime series and movies, Section23 Films has also been quietly dabbling in distributing a number of independent film projects from newer Japanese animators. These shorter, less mainstream productions tend to be a mixed bag, but I've come to enjoy watching them from time to time. The unusual aesthetic of This Boy Can Fight Aliens appealed to me more than usual, so it was a natural addition to my library once the Blu-Ray was available. Surprisingly, as well as making this short available on both DVD and Blu-Ray, Section23 went to the trouble of dubbing it too.

This Boy Can Fight Aliens is Yamamoto Soubi's anime debut. With a duration of just 30 minutes there's no time for expanding on a convoluted storyline, so the viewer is dropped right into the middle of things quite quickly. Since the film is so short I'm loath to go into much more detail than that; all I'll say is that the main conflict of this piece is ultimately not between the titular boy and the alien invaders at all; it's a more personal struggle for acceptance and understanding.

The most charming thing about this short film is the wonderful art style, which seems to be dividing reviewers online. Personally, I adore it, especially the garish use of bright colours and the scratchy look to the artwork. The style of the drawings isn't unusual to anyone who has ever read a BL manga, but to see it in anime form is a rare treat. Yamamoto also uses a lot of quirky manga stylings in her animation which might turn some people off; she's not afraid to cover the screen in text to emphasise a point, rather than using pictures or words as a normal director might.

Having mentioned the BL aesthetic I should probably state that this isn't actually a BL story in the slightest. All of the main characters are male, and all are living together, but there's nothing shady about it. It's implied that two of the characters may be in a relationship but how far you read into it is left entirely to the viewer. The core message of the story is a sweet, universal one. 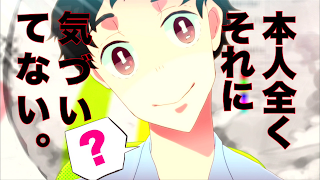 I found that This Boy Can Fight Aliens left a strong impression on me, which many shows fail to do even over a considerably longer runtime or with a much larger budget. That it was all driven by one creator is impressive. If the visuals don't appeal, or if you think that it's impossible to feel satisfied by dipping into a story for half an hour knowing that it's probably not part of something bigger, it's best to stay away, but if you like short stories and want to try something a little different I'd definitely recommend it. It's my favourite so far of all of the independent anime shorts Section23 has made available in the west.

The Blu-Ray picture is lovely, and there are some interesting extras included, most notably some short experimental anime produced by Yamamoto Soubi. These are a welcome inclusion even if there is some significant variance in the video quality.

Section23's release of This Boy Can Fight Aliens is available for a budget price from most stores which carry American DVDs, including Amazon. A new production, entitled Kono Danshi, Ningyo Hiroimashita (This Boy Picked Up A Merman) will be available on DVD soon in Japan, complete with English subtitles. I'm tempted to wait a little longer before importing it, just in case Section23 decide to follow up with a Blu-Ray release of that one as well.
at 8:11:00 am