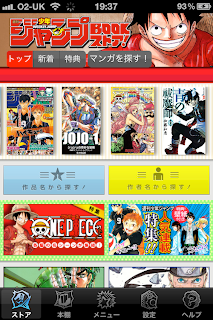 I was very interested to see that Shuueisha has finally launched a worthwhile digital manga platform on iOS today. As the descriptive name Jump Book Store helpfully indicates, the focus of their app is to provide a place to buy, collect and read various manga series associated with Shounen Jump (and the rest of the Jump family).

The English-language Viz Manga app from Viz was a enormous disappointment for users outside the US. It works beautifully on my iPad, but for reasons of corporate politics most of the worthwhile content is not available here with no alternative provided locally. It's a matter I'm rather sore about. With digital manga growing in popularity, legal methods to enjoy it are limited, especially if you want the popular shounen titles from Jump at the same time as users in Japan and America are able to read them. Being stuck in the past is being condemned to a life of reading spoilers by accident online.

Strangely, manga on the Kindle is also stuck in a rut due to Amazon's constraints on accepted formats, leaving phones and desktops as the big hopes for the medium in the digital age. It has been frustrating seeing the iTunes Store packed full of illegal manga sharing apps for months on end without much competition from the rights holders. I've tried reporting the illicit apps before with no luck - Apple don't understand the market, and don't care unless the person filing the report is someone important. 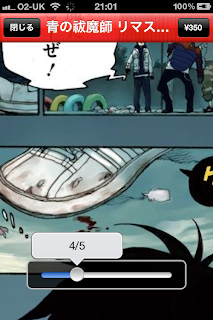 Things are at last shifting, I hope, with JManga having released a proper app for their service a few days ago and now Shuueisha tapping into the younger market in Japan itself. The main complaints from Japan so far seem to be the pricing, which is on par with with physical paperbacks rather than cheaper as had been expected, and the variety of titles on offer, which will probably improve rapidly. After playing with the app for a while myself I have to say it's a little bit twitchy compared to Viz America's slick, uselessly region-crippled effort. I tried downloading some samples in 'tachiyomi' mode to play with the interface; pictured to the right is the interface overlaid on a zoomed-in panel from Ao No Exorcist. The quality isn't as pin sharp as a printed book would be, however I can't deny that having a library stored digitally instead of upon my groaning shelves would be handy for a genre as calculatedly addictive as shounen manga. Investing a few pounds to check out the manga version of some currently-popular series is much easier than buying the heavy physical books and getting them shipped over. Not to mention considerably quicker.

It's amusing that while Japanese customers are fuming at the cost per volumes, the prices seem cheap to me, as a foreigner, entirely because they circumvent shipping fees. 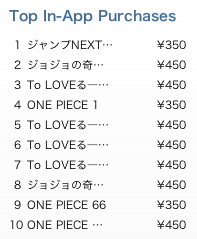 I've not tested making a purchase yet. It looks as though it will work even though I'm overseas - and rightly so, because there's a natural language barrier here. Travellers, expats and students need to be able to buy material legally in languages other than those of their current country of residence if the digital world is ever going to be anything other than a joke. Having said that, it would be magnificent if Shuueisha can expand this model in future and add their English-translated versions as an option for people who aren't lucky enough to live in America. Japanese students would certainly enjoy learning English more if they were able to do so with Luffy!

Looking at the top in-app purchases on launch day shows that the series with successful anime adaptations on the air at the moment are doing particularly well.

It's great to see Japan talking about digital delivery. The Jump Book Store has clear room for improvement and it's my hope that they keep moving in the right direction to bring fans more and more ways to read manga, wherever we live and whichever languages we speak.
at 9:44:00 pm