Another streaming leak? To Love-Ru Darkness

The full details aren't clear yet, but it seems as though there's been another 'leak' of a streaming episode. As a result, all of the current season's TBS properties have been suspended from streaming to the west.

The series at the centre of the furore seems to be To Love-Ru (Toraburu) Darkness, which has been quietly removed from streaming and had all references to its existence purged from The Anime Network's websites. The first episode was scheduled to air in Japan at 25:00 on Friday 5th October (01:00 on Saturday 6th October to people who use a standard 24 hour clock). 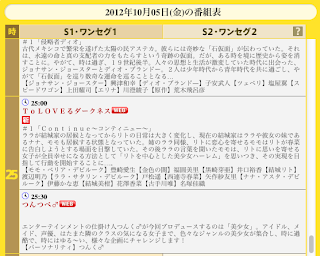 However, for some reason, The Anime Network was scheduled to stream that episode at 21:00 EDT on Thursday 4th October - that's 10:00 on Friday 5th October once you adjust for the 13 hour time difference.

With some quick maths, this means that Japan would be letting foreign companies stream anime episodes for free 15 hours before they are scheduled to air to their audience in Japan. Obviously, someone had made a mistake somewhere with the scheduling. The bulk of money in the anime comes from the Japanese audience, not from foreigners, and pandering to the US wouldn't have been a logical move; especially for this particular series, which enjoys significantly more popularity in its home country.

Fans had attempted to raise the matter with The Anime Network on their forums and contact forms but were quickly told that the scheduling had been properly approved. For a while, there was elation that inexplicably the west was getting something early.

However, a few hours after the stream had gone live, it was removed without explanation. The community has concluded that the reason for this is because the Japanese rights holders had reacted dramatically to the 'leak' and withdrawn all permission for The Anime Network to stream the show.

Mysteriously, Anime on Demand in the UK (who had the rights to the same series) announced that they were going to have to delay most of their streams for what looked like a week, owing to something which was "not an EU problem". They weren't pointing any fingers or supplying any details, but added that from their perspective they weren't sure how long the problem would take to resolve. Frustratingly, they were also able to advise fans in the UK that "with MIPCOM this week a lot of the key essential people are away so there are a lot of delays". I'm not sure how many of the parties involved are tied up with MIPCOM (it's some kind of entertainment industry conference), but at the very least it seems that Anime on Demand and their partners will have trouble smoothing things out until that's over. It's a great shame that Anime on Demand and the UK became entangled in this mess; they had been looking forward to making a splash with a relaunch of their service this season and had spent a lot of time and money putting it together.

It's a huge problem for Japan when something like this happens. Americans, being Americans, rip the streaming version and distribute it for free unlawfully as soon as the (already free!) stream goes live, so of course even Japanese fans, who had been blocked from seeing the stream on The Anime Network, were able to view To Love-Ru (Toraburu) Darkness before they should have. As a result, viewers for the television debut would have been potentially reduced in number, and sponsors for the show would be upset. It's a headache nobody wants to have dropped into their lap when they come into work on a Friday, and it's unclear where the problem actually lies; it could well be as simple as a contract having been printed without reference to which time zone was being used.

Streaming leaks have happened before. Code Geass R2 and Oreimo both had embarrassing incidents occur during their online broadcasts, and in France Persona 4 had an episode released early unintentionally. This affected the UK streaming in the end, moving it to a delayed schedule to avoid further mishaps. Hopefully this case will be similar, and once the people responsible have been dealt with appropriately so that it cannot happen again, normal streaming service can be restored.
at 9:08:00 am