News roundup: Capcom TV episode #25 and another round of Sengoku Basara 4 Sumeragi news

This is probably the biggest day yet for Sengoku Basara 4 Sumeragi news; no sooner did I finish my write-up of the last Sengoku Basara Magazine than there were even more regional tie-ins to write about, and then there's today's episode of Capcom TV as well as tonight's Weekly Famitsu article (which will be posted separately once I'm finished with work).

Remember the zunda-flavoured Country Ma'am biscuits from a few months ago? The latest announcement has expanded the range with three more flavours.

Yukimura's pack (Shinshuu apple) will be available in the Shinshuu area, Mitsunari's (green tea) will be available in Kansai and Motochika's (mixed citrus fruit) will be sold in Shikoku. Each pack costs ¥400 before tax and contains eight biscuits. They'll go on sale in souvenir stores in their respective regions from 21st July 2015.

The Kofu City collaborations expand further with a stamp rally

It's another update about an existing tie-in next as the Kofu City project has announced a stamp rally event to run between 18th July and 30th September 2015. The Kofu Samurai Wi-Fi x Sengoku Basara Stamp Rally celebrates the imminent 500th anniversary of the founding of the city. 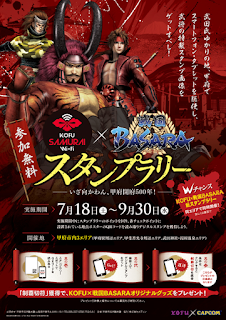 Since the area is so closely associated with Takeda Shingen historically, all of the Takeda army characters are involved in the stamp rally. 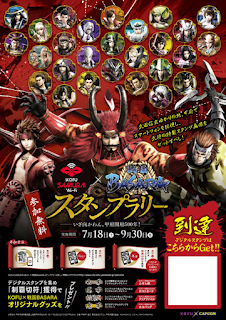 Various checkpoints have been set up across Kofu City. By scanning ten of the QR codes with your smartphone, you can collect special digital stamps. There are 30 different character stamps to track down!

If you manage to pass certain requirements, you'll receive a 'conquest ticket' which can be exchanged for items depending on the level of your ticket. 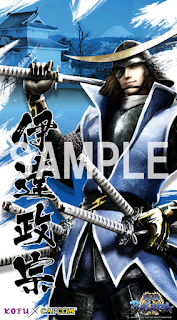 Paper stamps can also be found at each checkpoint. 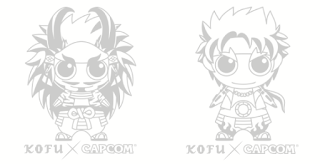 The event will be spread across three areas within Kofu City: around Kofu station, around Kai Zenkouji temple and in the Takeda Shrine/Yumura Onsen area. Maps are available on the campaign page and on these leaflets.

The gouK brand will be the next to collaborate with Capcom for a range of Sengoku Basara apparel. Masamune, Yukimura, Mitsunari and Ieyasu have inspired designer Kunitomo to create these special limited edition items. Buyers will also receive a special postcard and cloth wrap.

First is this ¥11,000 haori inspired by Masamune's jacket and armour. The crescent moon from his kabuto and lightning pattern gives it a gouK-style flair. 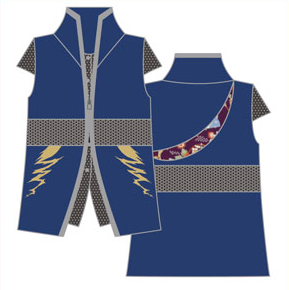 Yukimura's item is a ¥7,000 bag inspired by the flame pattern on his pants. The studs from his jacket also feature in the design. 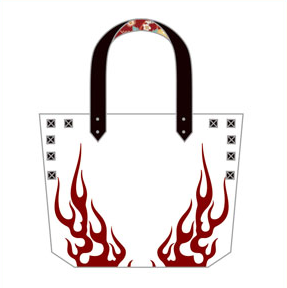 Mitsunari's t-shirt features the characters displayed on the front of his armour. There's a traditional Japanese pattern visible between the pleats. It will cost ¥8,000. 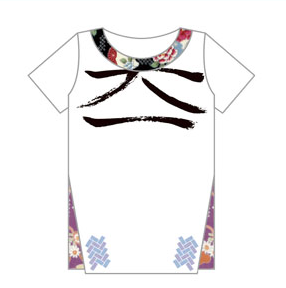 Ieyasu has a ¥9,200 parka with a large family crest on the hood and a rope printed on the back. 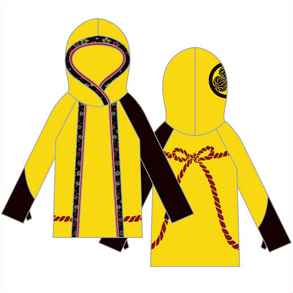 All four items will be available online from the KINCS shop as well as in various h.NAOTO boutiques across Japan. Availability will be limited; for example, the web shop will only be accepting orders between 19:00 on 18th July 2015 and 19:00 on 1st August 2015. The full availability details are included on the announcement page.

The cover artwork is revealed for the game's official strategy guide

The Amazon Japan listing for Sengoku Basara 4 Sumeragi: The Complete Guide and added the cover artwork. 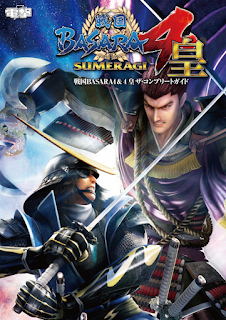 It's not a big surprise that they've chosen this particular picture to match the game's cover art.

There was much less new content on display this week. Presenters Edosan" and Fumiichi from the Monday Nico Nico Game Jikkyou Channel broadcasts drew Mitsunari and Hanbee as their characters and headed out to Maria's onsen stage. They seemed disappointed when they charged through only to find her in the footbath. 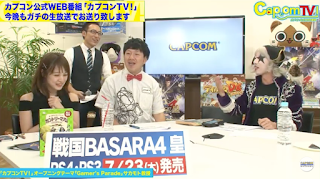 Next came Maria and Rikyuu on the new Battle for the Nation's Peace stage, where they demonstrated Maria's move set.

The final demonstration wasn't so much about the gameplay as an excuse to show off two of the Tenka Medal rewards. They chose Naotora's fifth costume (Exotic Queen version) together with Masamune's seventh (Pitch Black Dragon King version). 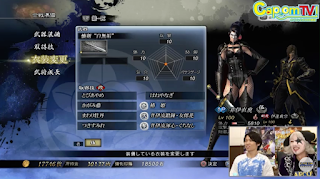 Naotora's sexy outfit commanded most of the hosts' attention. They panned around it whenever they could. The version of the game they were playing only had two costumes unlocked for Naotora, the regular one and the one they were demonstrating. 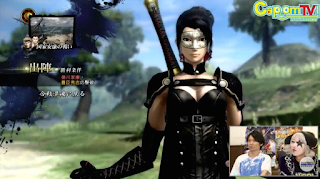 Once everyone had had their fill of Naotora's shapely thighs, a video report was shown which covered the Dengeki PlayStation Premium Event which took place two weeks ago. 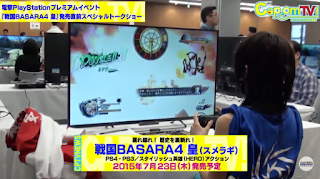 Finally, a news roundup where everyone cruelly ate tasty-looking Country Ma'am biscuits on air followed by a video message from Nishikawa Takanori of T.M.Revolution closed the Sengoku Basara 4 Sumeragi presentation. 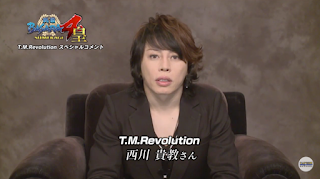 The stream link is here. It might go down later, in which case the video clips should appear on the Capcom YouTube channel a few days from now.
at 1:21:00 pm