I managed to watch the time shift of Sentosu's contribution to the Sengoku Basara 4 Sumeragi relay after getting home from work and decided to record my observations again. Weirdly, it was hosted by Gatchman - he seems to be everywhere.

A lot of the commenters seemed really excited when the Sengoku Basara 4 Sumeragi PV started playing after an hour and a half of handheld gaming discussion - which I skipped. Sentosu was introduced and the hosts fooled around with a green screen and joked about how he was playing 'Sentosu' No Rikyuu. 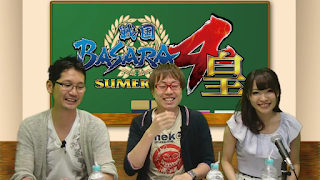 I wasn't expecting much from the broadcast but for once, they showed a different new stage instead of just spamming Kawanakajima again. I got to see Sakon's Sawayama Castle: Chouhan Defense!

The rest of this post contains mild gameplay spoilers so if you want the stage to be a surprise please stop reading here.

Chouhan is a Japanese dice game which requires the player to guess whether the number on some dice will be odd or even. According to the dialogue, Sakon is looking after the castle in Mitsunari's absence and decides to uh, gamble with the intruder. 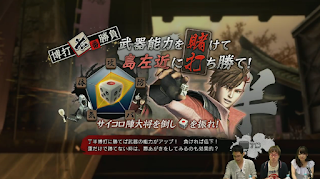 The whole stage has a complicated mechanic so I may as well explain it now to save some time after the game is released. Shortly after beginning you encounter Sakon and a camp commander with a dice icon above his head. Sakon names one of your stats, which you have to wager on a dice roll.

When you take the camp, a large die drops down from the roof. You can see in advance whether you need to get an odd number or even number by checking the icon in the bottom left (just check the numbers on the dice if you cannot read the text).

There's also a chart in the top right of the screen, above the map. This shows which stat you're gambling with whenever you roll the dice (Sakon declares that a wager using money would be 'dull'). Conveniently, the stats are both colour coded and in the exact same positions as on the weapon enhancement screen, so it shouldn't be difficult for importers to learn which is which. 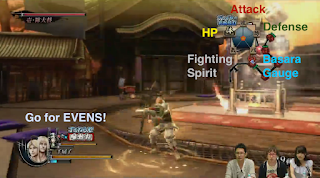 If you lose the roll, a purple icon appears over your dice and you suffer a permanent penalty to the stat which was wagered for the rest of the stage. 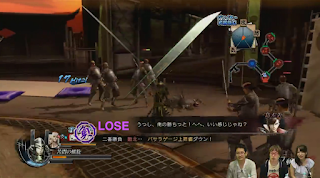 If you manage to win a roll, you'll see a red icon over your dice in the bottom left and the stat which was wagered will light up in the top right. That stat will be boosted. 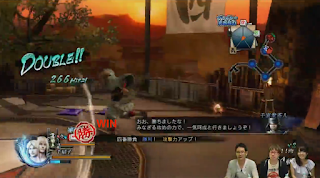 Sakon is also running around beating you up while you are taking the camps. You can stun him by reducing his HP to zero but he won't die from your attacks.

After the fifth camp, a path opens up which leads to a fight with Kobayakawa Hideaki and Tenkai. There's a minigame here too; the 'Sengoku Gourmet Society' is competing with you to gather ingredients before the countdown at the top of the screen reaches zero. 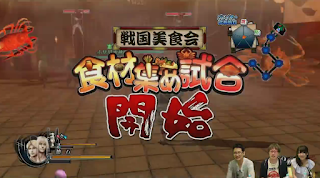 The winner gets a red icon and a bonus to their acquired coins (the player's score is on the left). 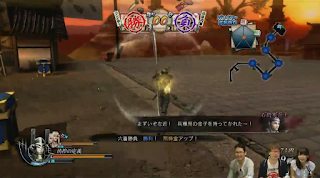 Finally, you're able to reach the seventh and final challenge. It's a normal boss fight against Sakon, except that his stats are boosted according to the outcome of the dice rolling earlier. The picture shows that Sakon has bonus icons under his bar for health, Basara gauge and fighting spirit, while the player only has increased attack and defense. 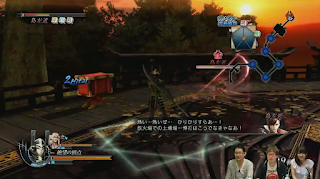 Aside from that it's a straightforward boss battle, though Sakon revived once after his initial defeat.

The stage gimmick is silly but I quite liked it. I guess even if you don't know what's happening you can just treat it as a super-random stage, though perhaps there's some trick to it like being able to hit the dice.

As for other observations, it looks as though Rikyuu's joke weapon could be okonomiyaki (with pork and egg, specifically). I'll add the weapon names to my ongoing reference materials post. 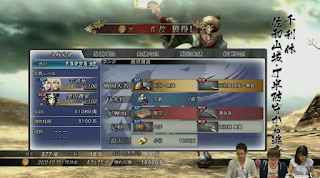 And that was all that I noticed today. There was some more gameplay demonstrated and a 2,000-hit combo challenge - which Sentosu easily cleared on Keiji's festival stage without any problems - but nothing else new caught my eye.
at 10:04:00 pm