The official website posted its weekly update last night, adding character profiles for more of the returning Sengoku Basara 4 veterans. As well as the pictures and quotes, there are more (slightly silly) nicknames:

Yesterday's new weapon for Sakon is confirmed on Twitter

The tweet includes a picture of the new weapon, and seems to imply that it will be limited to those who purchase the next issue of the magazine. There will probably be some more detailed information available later.

Today's bizarre Sengoku Basara tie-in is a collaboration between Capcom and Keikyu Dentetsu, a rail company in eastern Japan.

The Showdown! The Way of Battle Leading to Haneda! Stamp Rally campaign will run between 18th July and 27th September 2015. Special 'Keikyu x Sengoku Basara' tickets can be purchased during business hours at Keikyu Kamata or Haneda Airport Domestic Terminal stations and cost ¥1,000 for adults or ¥500 for children. They're valid for the whole line between those two stops. When you purchase the ticket you'll receive a stamp rally sheet... 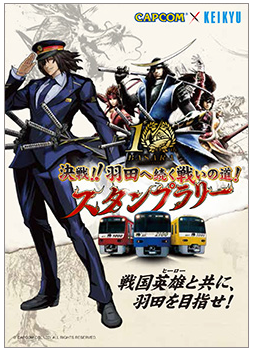 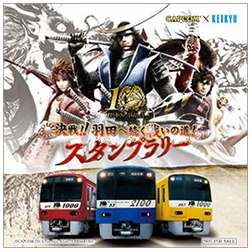 ...and one of a choice of three clear files. My favourite part is how they've chosen Masamune, Yukimura and Keiji as the main characters for this campaign and matched them with the colourful Keikyuu trains. 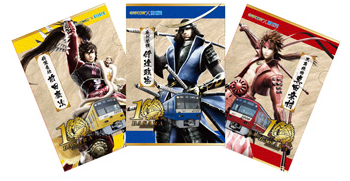 You can then rush around inside the stations on the line to collect all of the stamps to complete the challenge, while learning about each location from the information on the sheet at the same time. There's a silly roleplay story behind it all; you're 'defeating' the warriors who have occupied each of the stations. Therefore, when you finally get to to Haneda you have qualified as a famous warrior in your own right. The main reason for participation is simply to have fun.

The reward for turning in a completed stamp rally sheet at Haneda Airport International Terminal station is a certificate and a ticket for entry into a lottery to win some decent prizes, such as a copy of Sengoku Basara 4 Sumeragi or merchandise relating to either trains or Sengoku Basara.

Finally, a special 'station master Date Masamune' illustration will be used to promote the campaign. Naturally, he's wearing a Keikyu uniform (though I don't think I've seen many staff at the stations equipped with swords). 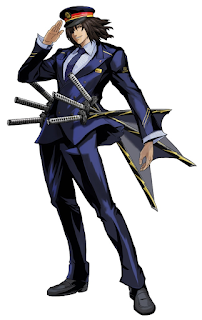 There were two sets of gameplay demonstrations in today's broadcast with Sepia and Neko Maguro. 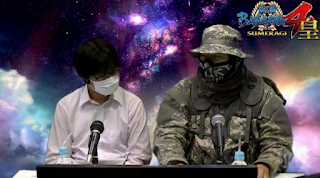 The first was Masamune and Kojuurou on the new Itsukushima Sanbee Occupation stage, while the second was Muneshige and Sourin on Naotora Women's Dojo. Since they had some extra time left over, the hosts finished off the broadcast with a combo challenge on Keiji's festival stage like before.

There were a couple of awkward moments where the hosts accidentally triggered a debug menu of some kind while playing the test version. 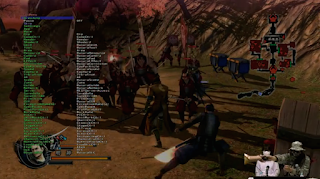 The dojo stage has quite a few text pop-ups so I've included annotated screenshots below and popped it below a link to avoid spoiling anything.

First of all, Itsukushima Sanbee Occupation. This is a relatively straightforward remix of Motonari's home stage from Sengoku Basara 4, though it now features Hanbee, Kanbee and Matabee as bosses.

The first major enemies the player will encounter are Kanbee and Matabee, who have a great introductory scene. 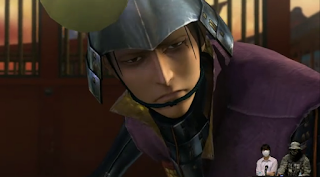 The instructions then pop up and explain that your task is to make the pair of them angry enough that they stop being able to work together. An 'anger gauge' appears next to the minimap. Progressing through the stage by killing enemies and taking bases will increase the anger level. 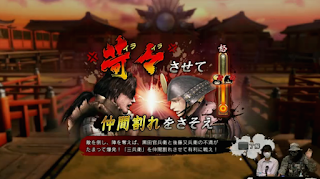 The Sakuganjouki Tsunomogura (Drillatron) from Sengoku Basara 3 also makes a comeback! I was too slow to manage to take a picture before it disappeared in a familiar way.

Edit: OneSanitarium captured a picture of the drill in action. 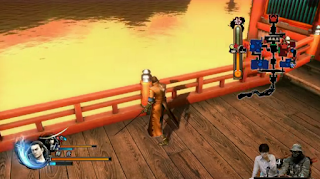 The final boss is Hanbee, though he's eventually assisted by the other two again after a few more funny moments. While it's a fairly straightforward stage, gameplay-wise, I enjoyed listening to the disgruntled banter between the feuding enemy commanders. They make a terrible team.

Next came the Naotora Women's Dojo demonstration. Sepia was enjoying playing as Muneshige and struggling a little with Sourin's crazy fighting style.

Naotora's version of the dojo is a little different to Shingen's. She will set you a variety of tasks in order to see how 'manly' you truly are, so you have to gather 'man'liness (the red kanji character). 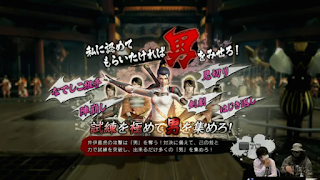 The first task is quite simple; take down as many of Naotora's female warriors as you can before the countdown reaches zero. 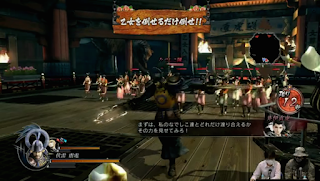 Next, you have to fight Naotora herself. I annotated the picture to show how the interface works. 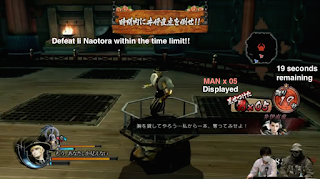 Naotora will grade you on your ability to complete specific challenges next, like winning a kengeki sword clash... 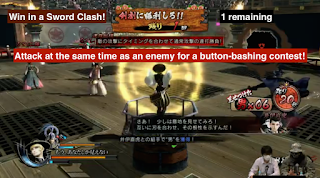 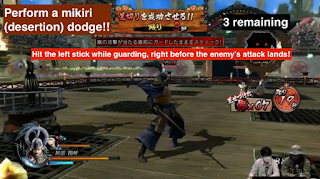 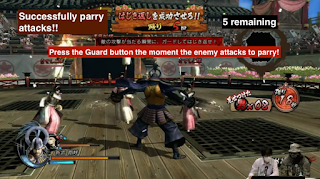 And breaking bases using the instant base destruction prompts. 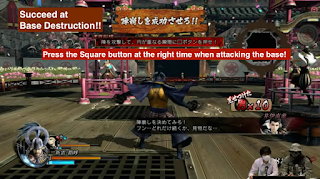 The on-screen counter used each time you destroy a base looks really cool. 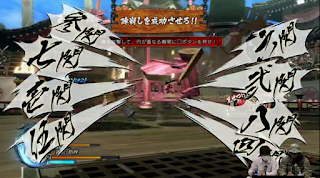 After the last challenge, Naotora pulls out her wooden paddle and the player's health bars vanish. They're replaced by a 'man' gauge which drops each time she lands a hit. The length of the gauge is determined by all of the 'man's you earned before. 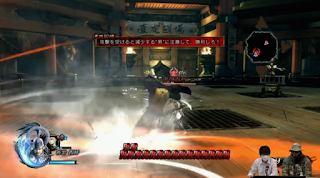 Once Naotora has been taken down the 'man's disappear and it's a straightforward boss battle to the finish. 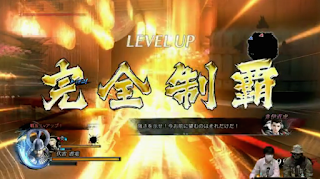 The text 'Perfect Conquest' came up at the end. I wonder whether this mode gets harder later on? They weren't playing on a high difficulty so I can imagine that it could be pretty brutal if the challenges scale up.

There's another new Nico Nico relay broadcast tomorrow at 20:00 Japan time with Parumira and Purukogi T. Once again, there are two different stream links but the broadcast content should be the same for both.
at 2:43:00 pm