As mentioned earlier today, this week was the first in a series of NGC episodes featuring gameplay from Sengoku Basara 4 Sumeragi. I was at work when the video aired so I caught up later with Nico Nico's time shift version.

Hosts Edosan" and Fumiichi started off by talking about the latest Dai Gyakuten Saiban and Devil May Cry updates for a while, then the show finally began its Sengoku Basara 4 Sumeragi coverage with the most recent full-length trailer. 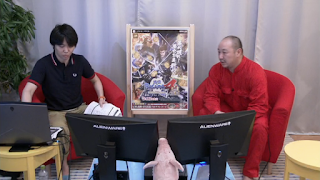 This kicked off around an hour of gameplay demonstrations, starting with Yoshiteru and Rikyuu on the Battle Of Kawanakajima Intrusion stage. They joked about Yoshiteru's time stop being like The World from a certain popular manga title.

The hosts were less cautious than Capcom so we got to see a few new screens from the game, like the title screen here. 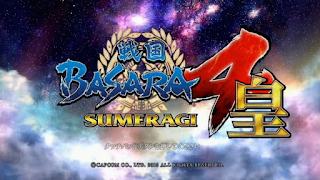 Pressing the touchpad takes you to the standard mode selection screen. Their version of the game had all of the characters unlocked at around level 100 but only the first two difficulties were available, so this isn't necessarily the final version of the mode selection; they went straight into Free Battle Mode so it was impossible to see more. 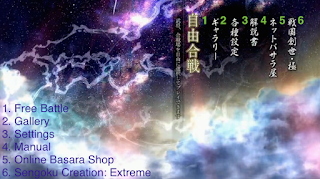 (I apologise for the terrible colours for my annotations today, it's not a very subtitle-friendly picture with the tools I have to hand.)

Personally speaking, I think it would be weird to have so much empty space on the mode selection screen when there aren't even any pictures on the left aside from the stylised map of Japan. There have to be some more modes, right?

I'm screengrabbing everything I can to make updating my guide easier when I finally get around to it (I'll update it tonight). There were lots of small details shown, like confirmation of the buttons for each of Rikyuu's moves and the addition of a description for his Hold Square move. 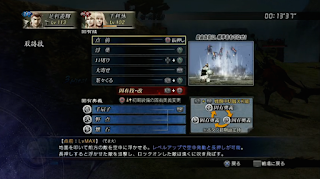 They cycled through the stage list a few times so I managed to pull out these details for a total of six confirmed stages exclusive to Sengoku Basara 4 Sumeragi.


The two listed as unconfirmed didn't load the enemy commander portrait before they were skipped past, but I'm reasonably sure that my guesses are correct. The others are 100% confirmed. In addition, I noticed that all but six of the stages from Sengoku Basara 4 are still there. The missing six are probably included too, it's just that the hosts never scrolled that far down the list in this particular video.

At one point a trophy message popped up. The trophy is called Acting Invincible and I would guess it's earned by transforming into Kanetsugu during the battle (and possibly achieving something with him). 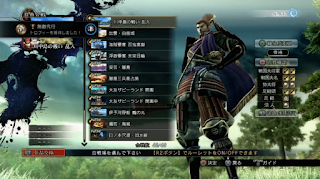 There was also an interesting kind of chest on the battlefield when Battle Roulette was switched on. 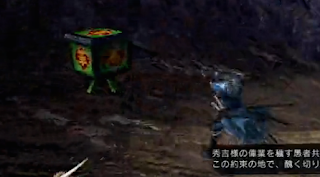 When the player broke this chest, a message appeared explaining that it would increase the chance of earning a particular result in the next roulette. The first one they broke promised a higher chance of a Transform (black) result, while the second gave Tenka (red). In both cases, the skulls and opposing colours were removed from the next Battle Roulette wheel, so it was completely black/gold or red/gold.

For people not painstakingly writing every detail down to create a guide the show was probably not essential viewing, yet I had fun listening to how much the hosts seemed to be enjoying the game. Their enthusiasm was infectious.

There will be another of these broadcasts at 19:00 Japan time next Monday, and the time shift version can be reserved now. Don't miss out if you'd like to watch.

The Nipponbashi, Osaka branch of Animate has tweeted about a ¥2,500 Sengoku Basara rope tote bag with a design inspired by Date Masamune. It's being released to commemorate the second year since the shop was renovated. The bag will go on sale on 31st July 2015 in very limited quantities so reservations are highly recommended when they open in the morning. 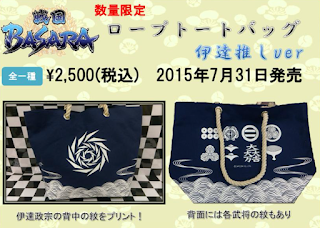