I planned for this update to be a short one summarising the new announcements in this week's magazine, but it turned out to be just as long as this morning's post. There's so much new Sengoku Basara 4 Sumeragi information to think about!

As usual, my Weekly Famitsu summary is split into numbered sections to match the magazine (and the official website when it updates tomorrow).

37. The most stories in the series - experience a total of 89 Sengoku Dramas!

Sarutobi Sasuke's drama route: Sasuke enters Iinoya Castle as part of an investigation, and an ominous shadow is lingering in the background...

Mogami Yoshiaki's drama route: Having decided to leave Yoshiteru and work under Nobunaga, Yoshiaki invades Oushuu in search of a gift.

Kuroda Kanbee's drama route: Kanbee meets his former subordinate, Matabee, in an underground passageway. From this he learns the location of the key to his shackles, and sets about aiming to recover it.

Date Masamune's anime route: When Oushuu is snatched away while he's away from his territory, Masamune's determination to seize the whole country is renewed.

Sanada Yukimura's anime route: Captivated by Yoshiteru, Yukimura heads towards the land where powerful warriors are gathered, his heart overflowing.

Ishida Mitsunari's anime route: Sakon has gone missing. When Mitsunari goes to look for him, he ends up clashing with Matabee in an underground passage.

Tokugawa Ieyasu's anime route: Ieyasu visits the land of Kai in order to request a ceasefire, and exchanges words with the warriors of the Takeda Army. The picture shows him fighting with Naotora (and Tadakatsu).

38. Even Miyamoto Musashi is intruding on the battle!

This feature is all about the 'bad' results from Battle Roulette.

1. Of all of the bad outcomes when the Battle Roulette lands on 'Punishment From Heaven' (skull), Musashi's intrusion is especially dangerous. He'll pursue the player for a set time and force you to choose between fleeing and continuing to battle in spite of the risk.

2. The second possibility is that you'll be hit by a falling golden tub and recruited as a Xavist. Waggling the sticks will save you from the Xavi angels who fly down to take your soul away to heaven.

3. Finally, there's the traditional bomb shower. Giant bombs rain down from the sky for a set time.

39. Movesets have been tuned and improved!

Much of the gameplay has been refined since Sengoku Basara 4. With things like moves becoming usable in the air and the system becoming easier to use, there are more strategic possibilities than before. The article shows some of the moves which now work in mid-air.
A footnote adds that Masamune's HELL DRAGON, Keiji's Oshi No Itte, Hisahide's Shouka, Motochika's Shibaku, Motonari's Hajikite: Heki and Tsuruhime's Nayuta Issen will all be usable in the air too.

40. A new difficulty level! 'Heaven' is harder than 'Basara' difficulty

Since the player can become so powerful after levelling up and boosting their weapons, a new difficulty has been added to keep the game challenging.
They want the player to feel worried even when they're surrounded by regular foot soldiers in 'Heaven' difficulty.

Reporter Giant Kuroda added some of his hands-on play impressions throughout the article. He's interested in all five of the 'restored' NPC characters but especially Kasuga - and not just for her sexiness or high-speed moves (although he complimented both). He recommended playing through her story modes with Kenshin!

Kuroda also praised seiyuu Genda Tesshou (Takeda Shingen) for his incredible performance. It was that and the sheer power of Shingen's moves when in 'Fuurinkazan' status that left a lasting impression on him.

He also made a few comments on the other three newcomers except they revealed nothing (Kenshin is still overwhelmingly strong, Toshiie is still hungry and Matsu is still fun and unique with all her animals). The magazine advises that a full report with hands-on gameplay impressions will be posted online in the near future.

Hey, there are no Tenka Medal rewards this time.

The game is sitting in 36th place (PS3) and 39th place (PS4) in this week's chart of most wanted upcoming games.


This next piece of information has absolutely nothing to do with Weekly Famitsu, it's just there's nowhere better to put it. I know a lot of people are curious about the new skill revisions. My copy of Sengoku Basara Magazine arrived today and while I won't have enough time to read it properly and write a review until next week, YamamotoD confirmed in an interview that the skill revisions will be activated with L1 + Square. It's not necessary to replace an existing move. KobaP added that the new skills are neither strong nor weak; they're simply designed to give you a chance to change the way you play.

I'm sure that there will be a few more interesting tidbits deeper in the magazine, so please look forward to the full information soon.

A brief summary of today's episode of Capcom TV (#24)

As promised, Gatchman appeared during the broadcast and demonstrated Sengoku Basara 4 Sumeragi for the hosts as the show's main feature. Capcom staffer Hashimoto Kenichi operated the menus and explained everything that was happening. 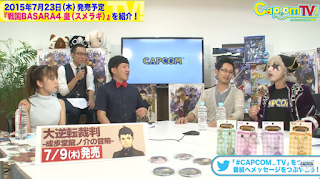 Gatchman was playing as Shimazu Yoshihiro with Fuuma Kotarou as his tag partner, and they had selected Keiji's festival stage from Sengoku Basara 4 for the show. I thought that it was a little strange to see them showing off the game using a stage and characters from its predecessor, though it was the PlayStation 4 version so perhaps people can spot some differences. 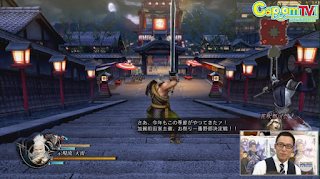 After fooling around a little, they took the hosts into the Tenka Medal shop and showed off a few additional rewards we haven't seen before. 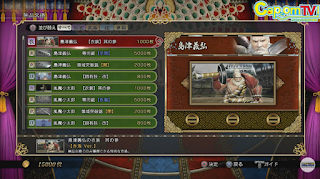 Here's what I spotted:
They also showed how the personal inscriptions work. Each comes pre-attached to a low level weapon - in Yoshihiro's case, it was attached to Kahou: Raijinken which is traditionally his second weapon. 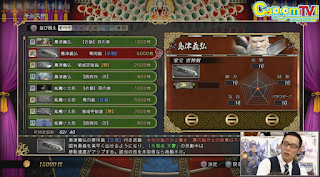 Once you buy a reward from the Tenka Medal shop, you see the following screen. They purchased Yoshihiro's personal inscription so there are instructions for attaching it to a weapon (it's the same as Sengoku Basara 4). There's also a description of the inscription's effect: Yoshihiro's R2 abilities can be triggered more quickly, and his movement speed is increased while he's using the Jigenryuu: Tenrai (R2 #1) skill. The inscription has no effect if the required skills have not yet been acquired.

It's not possible to combine personal inscriptions, or set more than one on the same weapon. 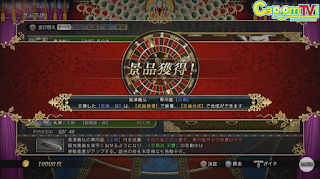 They tried to cut away from it but the stage list was shown for a fraction of a second when they left the Tenka Medal shop. My screenshot button was ready! 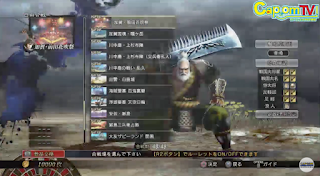 I can see one new stage in the list: Itsukushima Sanbee Occupation. If the 'Sanbee' (i.e. Matabee, Kanbee, Hanbee) have invaded Motonari's domain then it gives some additional context to that Betrayal video we saw a few days ago...

As you can see the video quality was horrible at this point so please forgive any errors. Incidentally, you press L1 on the stage select screen to enter the Tenka Medal shop, and R2 to toggle Battle Roulette on/off. The Play Book interface has been moved slightly.

On the march screen, you press R1 to set your Play Books and R2 to configure your tag partner. It's very similar to before, just rearranged. 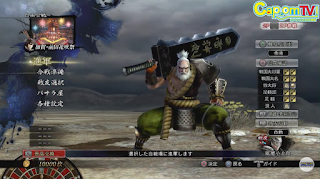 It looks as though each character can store 40 weapons this time. There's also an option in the game's settings to have the camera dynamically focus on your moves (was that there before?). You can set it to 'off' to have the camera stay in its usual position. I've called it 'move-based camera' in the picture below. 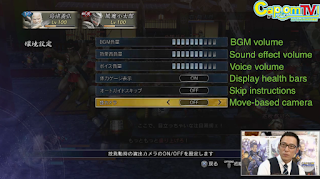 After a little more fiddling, they equipped the new weapon with its inscription and demonstrated how it affected Yoshihiro's moves back on the battlefield. Expert players will probably find this section the most interesting but it doesn't come across well in static pictures.

Next came a demonstration with Ashikaga Yoshiteru on the increasingly familiar Battle of Kawanakajima: Intrusion stage. Gatchman did a pretty good job demonstrating all of the different outcomes of his moves.

It looks as though the controller settings have been tidied up a little in the new interface. I've annotated screenshots of both settings screens to show exactly what you can adjust. 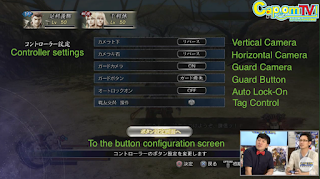 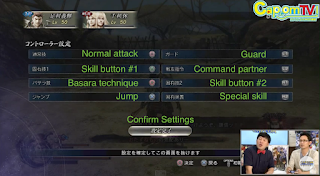 The gameplay videos will probably appear unannounced on the Capcom YouTube channel at some point in the next few days if the live stream link goes dead.

Capcom posted a schedule today which outlines a series of live Nico Nico broadcasts they have planned to promote Sengoku Basara 4 Sumeragi. They've gathered 20 popular presenters to demonstrate all 40 characters in a gameplay 'relay'.

All times are for Japan so please adjust for your local area. Most links go to the presenters' Nico Nico community pages as only one has posted their direct livestream link ready so far.

Don't forget that there will also be a weekly Sengoku Basara 4 Sumeragi broadcast on the NGC Nico Nico Game Jikkyou Channel starting at 19:00 next Monday, as announced back in April. The link for the first episode is now live so you can book a Timeshift viewing if you won't be around to watch the show when it airs.
at 5:36:00 pm