A series of fan meetings is announced for Basara Club members

A new set of events called was announced by email this morning. The full details are available on this special event website, and here's a summary.

As for the activities on offer, there will be talks with all of the seiyuu (touted as including things you'll only be able to hear if you attend), Q&As (including requests for them to speak particular lines), live dialogue performances and prize draws for signed goods. There will also be special merchandise for attendees to buy at the venue.

Club members who want to attend can enter the ticket lottery between 17th and 26th July 2015. Tickets are priced at ¥5,000 and come complete with a badge as an exclusive bonus.

It's good to see Tsuboi and Koyama listed with the other guests, they very rarely attend these events! I wish I could go...

Series producer KobaP was in attendance at SDCC yesterday to sign copies of various books distributed by Udon Entertainment, so the Famitsu website took the opportunity to ask him a few short questions about his trip. There are some nice pictures in the article showing KobaP posing with fans and signing items at the Udon booth.

KobaP revealed that another reason for his visit to the US is that he's currently managing an as-yet-unannounced movie project relating to one of Capcom's titles. Of course, he's still going to be working on games as well; he has even more games planned for the future but he can't talk about them yet.

Today's Nico Nico relay broadcast was the fourth in the series. This time, the hosts were Parumira and Purukogi T. O. They played through with Mogami Yoshiaki and Yamanaka Shikanosuke on Naotora's dojo stage, then Kingo and Tenkai on Itsukushima Sanbee Occupation. There was more drill action! The anger gauge started to go back down once it was apparent that the player wasn't doing too well. 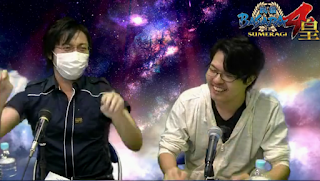 I still love this scene. 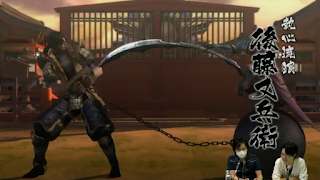 There wasn't much of note in the demonstrations themselves, but the hosts obligingly went through the stage menu in a different direction and confirmed that Mogami Yoshiaki is the boss of Oushuu: Ushuu Annexation, as anticipated. In addition, I can confirm that all of the Sengoku Basara 4 stages were present in the list as expected. So all of the 48 stages in the list are accounted for; 42 from Sengoku Basara 4 and 6 new ones. 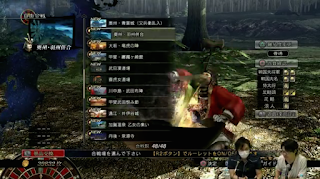 (This fact is slightly more interesting when combined with OneSanitarium's incredibly eagle-eyed observation earlier based on a modified Shizugatake map. It seems that the 48 stages we've seen in the list so far might not be the final number, after all.)

Edit: At some point, the official site added the information that there are more than 50 stages in the game. Credit goes to sjyune for noticing this.

They also scrolled through the entire Play Book list and it looks as though all of the Sengoku Basara 4 books have returned. I didn't see any new ones listed.

The next relay broadcast isn't until Tuesday next week when Shima will be hosting at 20:00 Japan time. The time shift can be booked now.

Sengoku Basara 4 Sumeragi will feature on next week's Capcom TV

The 25th episode of Capcom TV will air on YouTube, Nico Nico and Twitch on Wednesday 15th April 2015 at 20:00 Japan time, and Sengoku Basara 4 Sumeragi is going to be the main feature this time since it's being released just one week later.

Edosan" and Fumiichi from the Monday NGC Nico Nico Game Jikkyou Channel shows will be appearing as guests, and the article promises that fans will be able to see some Kyougoku Maria gameplay as well as the medal rewards and skill revisions for Masamune and Naotora.

That means there will be broadcasts on Monday (NGC), Tuesday (Relay) and Wednesday (Capcom TV) next week, plus the last (?) major Weekly Famitsu bulletin before the game's release date. It's going to be busy.
at 12:17:00 am