Weekly Famitsu magazine came with a Sengoku Basara 4 Sumeragi supplement this week which collected all of the previous coverage to date. In addition, there was a 9-page feature article with a few more interesting details about the game. 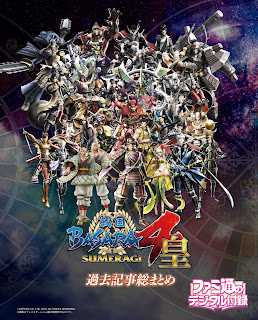 41. Play on the most stages in the series' history

A preview of the game's new stages confirmed the following new ones:


The article only confirms one boss per stage (even though we already know there are two on one of the other stages featured) so I've added logical assumptions for sub-bosses in my table above.

There are also short descriptions.

Once in a Lifetime: An encounter with Sen No Rikyuu, who is fleeing from the Toyotomi army on suspicion of trying to assassinate Hideyoshi. Break through the powerful attacks from Wabisuke and Sabisuke.

Azure-Crimson and the Demon King: In the blaze of Honnouji, Masamune and Yukimura challenge the Demon King, Oda Nobunaga. Intruding upon the dangerous battlefield with these three warriors, defeat them all and become the true victor!

The main news in this section is the formal reveal of the Personal Inscriptions we've known about for a while. It includes descriptions of some of the effects.

Magoichi's skill revision shows the full version of her (very nice) medal costume. Magoichi causes an explosion by firing a grenade. It can be used as a ranged attack.

43. Not just the tie-in campaigns! A variety of DLC is revealed all at once

They've only talked about the six major tie-in DLC costumes up until now but there's much more planned. The first goodies will be available from the Japanese PSN store tomorrow!

They have also confirmed the availability for the six major tie-in campaign costumes, for those who want to buy the costumes they like from PSN rather than getting the full set with the special edition of the game. The bad news is that it looks as though they're only available in bundles for now.

I'm not sure about the full details for the two 'weapons with inscriptions' sets. Perhaps the large one contains enough weapons for all of the characters?

44. The design of the Sengoku Basara 4 21 Costume Hobby Box is revealed!

This is already on display on the official website so this news item isn't very interesting.

45. Transfer your save data from Sengoku Basara 4

If you have save data from Sengoku Basara 4, it's possible to transfer the following to Sengoku Basara 4 Sumeragi no matter whether you're buying the PS3 or PS4 version:

The article doesn't mention it but a previous report also noted that unlocked difficulty levels will also be included. As previously stated, the content which is specifically not going to be included in the save data import is your accumulated money, unused experience points and consumable weapon upgrade items. The consumables will be converted to Tenka Medals.

The additional reward for transferring your Sengoku Basara 4 save is that you will start with some skill revisions already unlocked right from the start without having to buy them with Tenka Medals. The number of skills will depend on the state of your save data.

All of this will be posted on the official website shortly along with proper instructions; the magazine article is just giving fans a head start.

I already posted all about this here.

The PS3 version of Sengoku Basara 4 Sumeragi is currently ranked in 35th place in the magazine's chart of most wanted upcoming games.

There will be another big 12-page feature in next week's issue to celebrate the game's launch, as well as a DLC code for Maria's 'Cat paws to suit the lovely me' weapon. It's described as a unique weapon which can send enemies flying with paws - like a rocket punch. It also changes her element from wind to light. Maria is wearing cute cat ears in the pictures.

(Please note that as with Sakon's weapon from Dengeki PlayStation, there is no mention of the weapon being completely exclusive to the magazine. It might be available as paid DLC later on.)
at 6:47:00 pm