The preview for Thursday's Weekly Famitsu is revealed

This week's Weekly Famitsu will include the usual Sengoku Basara 4 Sumeragi updates and they're putting extra effort in since the game will be released so soon. The online preview promises a recap of all of the news so far along with six additional topics. There will be new information starting with DLC and a closer look at one of Kyougoku Maria's weapons, which is apparently called 'Cat paws to suit the lovely me' (apologies for the ungainly English). It sounds as though there will be a bonus for magazine readers in the following issue, which comes out on the same day as the game. 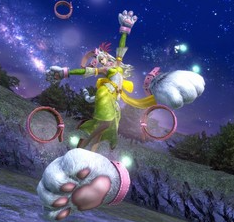 I'll post the full news as soon as the magazine is available on Thursday morning (Japan time).

Monday's Nico Nico Game Jikkyou Channel broadcast had hosts Edosan" and Fumiichi trying out Maria and Kasuga on Sakon's new stage first of all. They were having a brilliant time and laughing as they played, which made it very fun to watch after a hectic day of work. 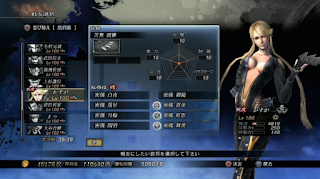 The hosts decided to check Maria's move list before they got started and they were in hysterics laughing at the saucy names and outlandish descriptions. 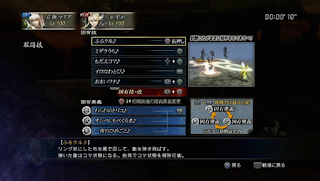 The laughter started again when they discovered Kasuga's pole dance move and started desperately trying to pull it off successfully. It seems tremendously difficult (and tremendously powerful at the same time). The video quality wasn't so good for me during the action-heavy scenes so I'm afraid I didn't take any pictures of Kasuga twirling around. 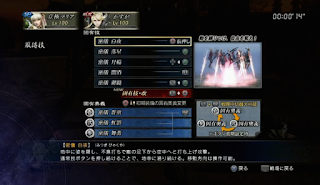 In one of the funnier moments, the hosts became obsessed with using Maria's Warawa No Toriko♪ special on Sakon to see whether she reacted any differently to him when he was tied up. They were delighted when she appraised him as 'fine' and blew him a kiss rather than dismissing him like some of the other soldiers. 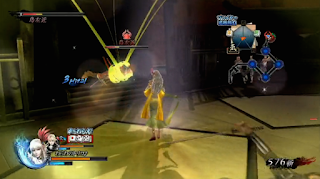 When Maria encountered Sakon for the main fight, a special scene played showing her teasing him with her cloth as seen in one of the early promotional videos. Amusingly, both fighters were still covered in crabs from the boss fight with Hideaki when they reached Sakon at the end of the stage.

The victory screen confirmed a few more weapon names for both ladies. I've added all of the names to my ongoing reference guide. 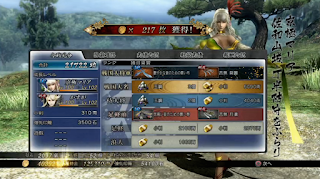 The next part of the show showed Masamune and Yukimura fighting on the Osaka: Toyotomi Hajou stage. I didn't notice many new details and I was so tired that I just let the exciting atmosphere wash over me before going to bed, so there aren't any screenshots of that.

There's nothing more boring than watching professional game demonstrations by people who don't look as though they're having fun. The NGC show was a breath of fresh air in that respect; they were loving every minute of the game and it made me even more hyped for release day!

Don't forget that the two NGC hosts will be on Capcom TV tomorrow at 20:00 Japan time as part of their Sengoku Basara 4 Sumeragi coverage!

Shima's broadcast was today and I tuned in later on via time shift. 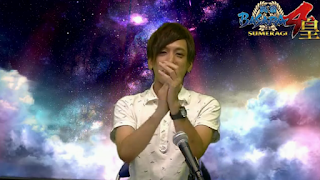 I was delighted when he messed up on the game's main menu and unintentionally revealed how it works. It wraps around in way which would be completely pointless if it already easily fits on the screen.

There's no way that they would make the menu wrap around like that if it wasn't intended to hold more items, right? 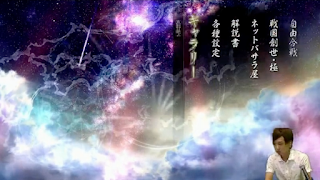 The simple map of Japan in the background changed into a fan when Shima switched modes. 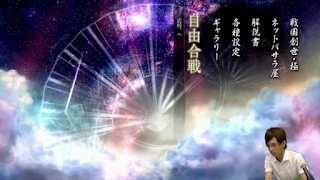 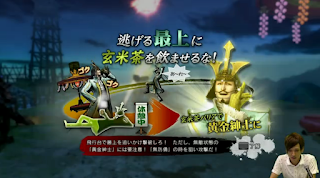 Another picture, because the moving graphic of Yoshiaki relaxing and drinking tea at the top of the screen is so funny. He also keeps popping up in front of the screen in an annoying way. 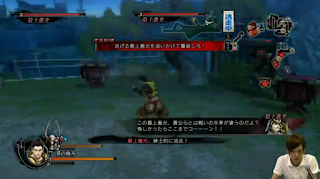 With all those jump pads, it reminds me a little of the Setouchi Conspiracy stage in Sengoku Basara 3 Utage... 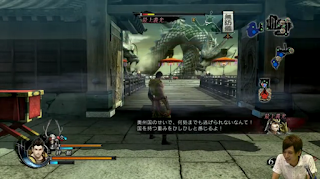 The aim of this stage is to use the jump pads to prevent Mogami from running away and drinking his genmaicha (the brown rice tea he adores). The genmaicha powers him and turns him into the invincible 'Golden Gentleman'. It's best to attack when he's 'Defenceless'!

Yoshiaki has various different statuses which you can check by looking at the colour of the sign next to him at the top of the screen.

Blue is Escaping.
Green is Taking A Break.
Gold is Golden Gentleman.
Grey is Defenceless.
Red is Surrender.

Yoshiaki is pretty lucky to get two silly stages when some of the others have to share. I love beating him up so that's not a bad thing.

The next demonstration was the daytime version of Sourin's theme park stage, then there was the traditional scramble on the Maeda festival stage to finish things off. Since Shima was on his own he was trying to play and commentate at the same time, and I think he had a harder time than the other presenters we've seen so far. He did ok though.

Fan OneSanitarium has put some gameplay highlights together here and here for those who weren't able to watch the two streams described above.

The next relay broadcast will take place at 20:00 Japan time on 16th July 2015. The presenters will be Ojogiri Daa and Dogma Kazami. They've confirmed that it will be a joint broadcast so both links will probably be for the exact same footage.

The Famitsu website has published details of a pair of launch events scheduled for 23rd July 2015. The Sengoku Basara 4 Sumeragi Release Day Commemorative In-Store Events will give fans who buy the game the chance to meet the series' creators for a meet and greet. They can have their favourite Sengoku Basara item signed and exchange a few words with series producer KobaP (Tokyo) or series director Yamamoto Makoto (Osaka).

The venues will be Bic Camera Ikebukuro (Tokyo) and Joshin Denki Disc Pier Nipponbashi (Osaka). The signing sessions will begin at 12:00 with the lottery coming later on in the day and booths offering trials of the game. Tickets for the event will be distributed from 10:00 at both participating stores on a first come, first served basis.

Those who bring along a receipt showing that they bought the game at the store will also be given the opportunity to participate in a lottery drawing to win various prizes relating to Sengoku Basara, the most desirable of which are the seiyuu autographs. You get one chance at a prize for each time you purchase the game, until the prizes run out (however, you can only have one ticket for the signing session even if you purchase the game multiple times).

It also seems that KobaP is going to be showing up on a radio show this week (along with Nioh, a pair of cool female performers who often attend historical festivals in Japan). The timing isn't great as it's airing on Friday at 02:00 in the morning Japan time, but there's going to be some Sumeragi gameplay discussion there too.

Those two new Sengoku Basara 4 Sumeragi commercials from the weekend

I also may as well share these two new videos from last weekend's anime broadcast. I thought Nico Nico was going to take them down sooner but I guess they haven't yet, so credit again goes to OneSanitarium for finding them. The first is a bonkers television commercial with a few seconds of new footage and general shouting.


The other video is a high speed news bulletin with that Kenshin vs Shingen clip they have been teasing for a long time. Embedding isn't allowed. I'm sure they'll appear on the proper Capcom YouTube channel soon too but the quality of the unofficial upload is great.

(I promise I'll have the Sengoku Basara Magazine review up at some point tonight. I only have one more interview to summarise...)
at 8:40:00 pm