Further details about the stage presentations and live streaming schedule will be published on 10th April.

Another piece of information on the same website revealed that Sengoku Basara 4 Sumeragi will be rated CERO B (12+) when it's released. While the rating itself isn't all that interesting, it shows that the game is on track and we can probably expect to learn more about the release date soon - at last.

The official Computer Entertainment Rating Organization website has yet to publish the rating in its database so there are no hints about the game's content to be found. For the curious, all of the previous games in the series have been rated the equivalent of CERO B aside from Sengoku Basara 3 Utage, which received an upgraded CERO C (15+) rating for its violent content. Sengoku Basara 4 was the first game to receive a specific warning for strong language. Both Sengoku Basara 2 Eiyuu Gaiden (HEROES) and Sengoku Basara 4 were given warnings for crime.

It's funny how ratings boards work across the world; I still don't entirely understand why Sengoku Basara 3 was rated 12+ in Japan, 13+ in the US and then 16+ in Europe due to its "realistic-looking violence".

The biggest news story this week has been the announcement that the government of Kofu City approached Capcom and signed an agreement to use the Sengoku Basara characters - in particular Takeda Shingen, who had strong historical ties to the region - to promote local tourism as part of the city's quincentenary celebrations four years from now. While the series has been involved in a large number of regional tie-ins before, it's a great honour to be part of something so respectable and it looks as though Capcom is taking it very seriously, declaring it the first time that such a comprehensive partnership has ever been set up between a local governing body and a gaming company.

You can read the full press release in professionally-translated English on Capcom's Investor Relations page (or in Japanese, if you prefer).

In between the official commemorative photo shoots to mark the agreement with city mayor Higuchi Yuuichi, KobaP shared some pictures of the Shingen-kou Matsuri posters on display in the city hall. He commented about his sadness at not being able to attend the festival this year due to scheduling conflicts in a detailed Famitsu report. KobaP also mentioned his fondness for Takeda Shingen and then calmly gave the first formal confirmation that Takeda Shingen will be playable again in Sengoku Basara 4 Sumeragi. He added that Shingen's hair gave them a lot of trouble back when the first game came out on PlayStation 2.

When the reporter challenged him on the announcement he just made, KobaP went on to say that the game is nearing completion and it has a fun atmosphere like that of a festival. The three new playable characters are unlike any of the characters who have come before them and they've given older characters from the whole ten-year history of the series various boosts this time around.

(Raindrops' note: If they're going to be promoting this tie-in for the next four years, I think it sounds like a good opportunity to make Shingen more important in the game series again. Sorry for burying the 'announcement' in this story but I wanted to do it the same way KobaP did!)

Capcom will also collaborate with historical events this summer

A local government press release was published yesterday with details of some summer events at the Saitama Prefectural Museum of History and Folklore. Among the plans are details of a special exhibition between 18th July and 30th August 2015 titled Sengoku Zukan -Cool Basara Style- ('Sengoku Reference Book -Cool Basara Style-). It turns out that this is being hosted by a team formed by the succinctly-named Association for the Research and Preservation of Japanese Helmets and Armor and Capcom. The plan is to feature historical materials along with characters from the game to teach visitors about the links that the era's famous warriors had to Saitama Prefecture.

None of this has been formally revealed on either the Capcom or museum websites as far as I know, so further details will probably become available later on when the events are announced to the public.

It's been a while since the voting last year but the haraKIRI x My Capcom maekake aprons are now on sale exclusively at the e-Capcom online store! The Sengoku Basara design costs ¥5,800 before tax and goes on sale on 18th June 2015. 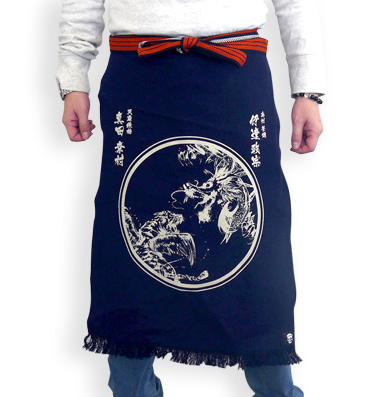 Preview for the latest volume of Gakuen Basara

The eighth volume of the Gakuen Basara manga, titled Gakuen Basara: Gakusai Rantou-hen ('School Festival Brawl'), was released today in Japan. Dengeki have published a blog post to draw attention to the release with samples of four of the ten short manga which will feature. They also promise that it will include three illustrations. I can't wait to read it!

The upcoming Sengoku Basara Seishi ("The Official History of Sengoku Basara") book was scheduled for mid-April but Amazon Japan delisted it yesterday and emailed me to advise that it had been delayed until early September 2015. This is the second time I've ordered this book and had the details completely change. I wonder whether it will ever actually be released.

April's issue of Animedia Deluxe Vol. 7 went on sale earlier this week and it apparently included some Sengoku Basara Judge End content. I don't have the full details yet but if you're interested in collecting magazines about the series it might be best to pick up a copy soon.

Trivia: Someone at Sony has good taste in historical figures

This has absolutely nothing to do with Sengoku Basara but I thought it was cool. The recent PlayStation 4 2.50 software update bore the codename Yukimura, which is especially apt given that the 2.00 update was called Masamune. Hmm! I wonder what version 3.00 will be called?
at 9:39:00 pm