News roundup: A few Sengoku Basara updates and an attempt to clarify the DLC situation

Amazon posts the cover artwork for the Complete Works book 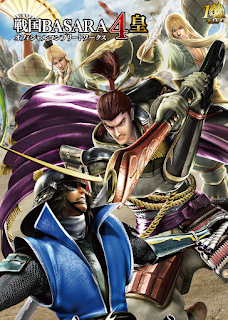 I can't wait for Amazon to list the next V-Jump so I can place my order for both together! 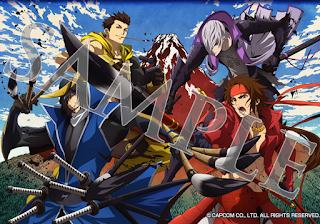 Now that Sengoku Basara 4 Sumeragi has been released, the next big upcoming event will be the Butai Sengoku Basara vs Devil May Cry stage play which starts its run three weeks from now. Fans of Sengoku Basara or Devil May Cry who will be in Japan on 30th August 2015 but unable to make it to the AiiA 2.5 Theater Tokyo can book tickets to see the finale closer to home, as a 'live viewing' broadcast has been announced for cinemas across Japan. Further details are available on the official website.

Seiyuu fans may be interested to read this report by fellow fan Mewshuji!

Monday's special video was (Approximately) 10-second Theatre: Hungry General. It's Toshiie's turn for a closer look at his special moves.

In case you missed it, the episode of the Q Transformers anime with a guest appearance by Sengoku Basara's Sanada Yukimura is available on the official DLE channel on YouTube. It's nothing to write home about but it's fun to see the series appearing elsewhere.


How to claim your four 'early reservation' weapons, if you registered for them

I'm still waiting for my physical copy of the game to arrive (it's being held in UK customs waiting for my expensive fines to be calculated - tch!) so these instructions might be incomplete. I'll finish them once I've successfully claimed my weapons.

In the meantime, here's what I know so far about the way you obtain the code for the benefit of those who registered their Sumeragi ID in time and now have their copies of the game. First, you need to visit the Sumeragi ID website and log in with your Sumeragi ID, just like you did before. 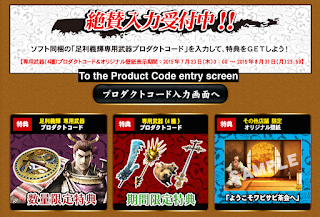 Click the new black button above the picture of the weapons as shown above, then check inside the game box for your PSN code for Yoshiteru's special weapon. You need to enter it into the next screen as shown, then click the black button at the bottom. 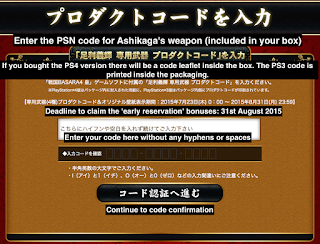 There may be additional steps but I'm hoping it's straightforward. You should be presented with a PSN code for the four 'early reservation' weapons and a download link for the special bonus wallpaper. I should have my physical copy later this week so I'll be able to confirm any extra details then.

Update: I have now been through the process myself and can confirm that the code and wallpaper details are on the very next page as expected. Be careful not to delete your save after claiming the weapons on PSN as this can sometimes cause the weapon DLC to be lost.

Note: Please remember that the weapon DLC can only be used when playing on your Japanese PSN account. Costume DLC will work on any account on the same console after its initial activation.

There has been some confusion about this so I'll try to explain it clearly.

If your Sumeragi save is linked to a Japanese PSN account...
All of the Japanese DLC will work. When you start up the game it will check for any DLC and the special weapons and costumes will be unlocked in your inventory ready for use. The only thing to be careful about is that if you decide to delete your Japanese save and start over for some reason after redeeming consumable DLC (e.g. the inscription packs and boosts on PSN) you won't have access to them any more. Weapons, music and costumes are permanently attached to your account.

If your Sumeragi save is linked to a non-Japanese PSN account...
You can use costume DLC after activating it on a Japanese account first, but any DLC weapons and boosts (like the inscription packs) will be unavailable. At this time there is no way to access those other than by starting over with a new save on a Japanese account.

If you don't have a save yet (i.e. you are starting the game fresh)...
I recommend using a Japanese account if you can, in case they add more weapons you can't resist later on. It's not hard to level up and gather materials this time around, and it's much easier to start from the beginning with an account set to the correct region than it will be to start over later on.

These rules apply to both PS3 and PS4 users. Future weapon DLC which isn't already on the disc might work normally, but I have personally confirmed that the current weapons will only show up if you use an account from the correct region.

Please note that by 'weapon DLC' I mean the eight element-changing DLC weapons only. The special weapon skins which match the collaboration costumes are not actual weapons; you will see those automatically if you switch to your character's first weapon no matter which account you're on.

Finally, if you have Asian codes rather than Japanese ones - for example, the code for the DLC weapons in some copies of the Asian edition of the game - you may need to activate them on an account from one of the Asian PSN stores rather than the Japanese one. In that case, you just need your save to be on the same account you used for activation in order for the weapon/boost DLC to show up.
at 2:11:00 pm