News roundup: Transferring save data to Sengoku Basara 4 Sumeragi and other updates

The official Sengoku Basara 4 Sumeragi website updated this morning to explain how the save transfer feature works. Judging by the number of messages and emails I've received about this, a lot of people have been anxiously waiting for these details! Here's a brief walkthrough.

Important: The save data transfer option will only be available the very first time you launch Sengoku Basara 4 Sumeragi. If you make a mistake, completely delete the new Sengoku Basara 4 Sumeragi save file which was created on your PlayStation, relaunch the game then repeat the process from the beginning. If you have purchased any consumable DLC such as money or experience bundles, you will not be able to claim them a second time. It's best to make sure you're happy with your save game before visiting the store.

Warning: If your Sengoku Basara 4 save is on a non-Japanese/Asian PSN account, you will not be able to use any weapon or boost DLC in Sengoku Basara 4 Sumeragi. This doesn't affect costume DLC, which can be shared between accounts on the same console as normal. If you plan to use any of the exclusive DLC weapons or boost DLC it may be best to start over from a new save game on a Japanese or Asian PSN account. It's much easier to obtain rare inscriptions now and there's no trophy for getting each character to the maximum level in Sengoku Basara 4 Sumeragi.

1. Transferring data to the PlayStation 4 version of Sengoku Basara 4 Sumeragi

The first thing you need to do is load your copy of Sengoku Basara 4 and install the update that's now available for it. It doesn't matter whether you have the physical or digital edition of the game. You'll be notified about the update as soon as the game is launched.

Then, go into Settings from the main menu. It's the fourth item in the list. A new option has been added to the bottom of the Settings menu: Upload. 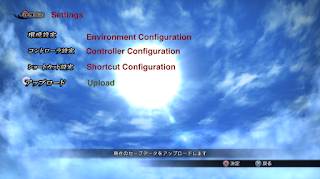 You will immediately be prompted to upload your data. It's very simple. 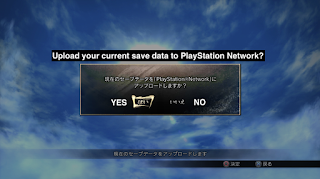 Your PS3 will connect to PSN and upload your game data. It will be uploaded to the same account you're using on the PS3, so make sure you're using the one with your main game save. It's not necessary to have PlayStation Plus.

You should see this screen once the upload successfully finishes. 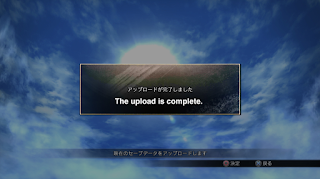 When you have your copy of Sengoku Basara 4 Sumeragi, make sure you're logged in as the same PSN account you used with your PS3 Sengoku Basara 4 save data. It's fine if it's not a Japanese account, however, early reports indicate that you can only use weapon/boost DLC from the same zone as your save (costumes are unaffected). It might be best to start over with a Japanese account if you want that DLC.

Start the game up. You'll see this screen the very first time the game loads. 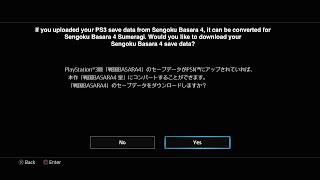 Then this screen will appear. 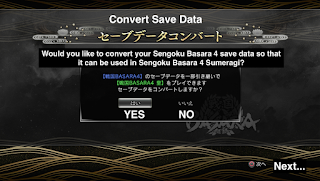 Obviously, the answer is Yes. 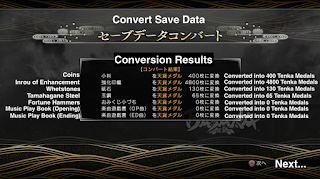 The next screen shows how any non-transferable weapon upgrade materials and banked experience will be converted into Tenka Medals. Interestingly, the last two items are the two music Play Books for the opening and ending theme songs. I'm guessing they won't be available in Sengoku Basara 4 Sumeragi since they'd have to pay to license the songs a second time, so their Play Books will be replaced by the two new theme songs. A few additional Tenka Medals will be awarded as compensation for those who unlocked the two themes in Sengoku Basara 4.

The exact number of Tenka Medals awarded will vary depending on how much progress was stored in your Sengoku Basara 4 save before the import. The conversion formula hasn't been published on the website.

There will be one more screen after this (not pictured) which tells you how many skill revisions you've unlocked for free as a loyalty bonus. It won't be a large number, and you can unlock the rest with Tenka Medals as you play.

2. Transferring data to the PlayStation 3 version of Sengoku Basara 4 Sumeragi

This is a simple process and there is no need to download the update from PSN. All you have to do is ensure that your Sengoku Basara 4 save data is stored on your PlayStation 3's hard drive. The first time you launch Sengoku Basara 4 Sumeragi, you will see the following screen.

It's exactly the same as the final step of the PlayStation 4 import. Select Yes and confirm your Tenka Medal conversion results.

As with PS4, the next screen shows you whether you unlocked any additional skill revisions for free as a loyalty bonus. If you didn't, you can still unlock them later with Tenka Medals.

If you have trouble with the PS3 transfer, check this comment for a possible solution. There was a software update shortly after launch which may have changed the procedure slightly.

Aside from the save transfer details, today's website update had a few extra sneaky pieces of information. Ten character profiles were added with the usual silly nicknames.

(Sourin's doesn't mean he's literally claiming to be Xavi's child. It means 'child' in a spiritual sense. Tadakatsu's is edging ever closer to being an outright Mobile Suit Gundam reference given the Japanese phrasing.)

The page which lists the already-announced Personal Inscriptions has pictures of even more Tenka Medal costumes.

Another page confirms that further DLC is planned in future, so keep checking for new announcements. If you're not sure about buying the new PlayStation 4 theme which came out today, SPARDA-990 has posted a few snapshots of the theme in action. I really like it, especially the silly details in the icons:

And unlike almost every other PS4 theme I have collected, the colour scheme doesn't make it impossible to see all the text. Cool.

Finally, the three new stages revealed the other day are confirmed to be one-on-one battles, not full stages in their own right. This explains why they have been missing from the Free Battle Mode stage count in all of the demonstrations so far. There's also another new one-on-one stage: Creature Concerto (いきもの協奏曲). Oyassan leads the animals of the Maeda army in a fun (and powerful) romp.

Capcom posts another short trailer for the game

The 15-second version of the game's television commercial is now available on the Capcom YouTube channel.


The Famitsu website posts play impressions for the returning characters

I'm not going to translate this article since it's not saying anything new, but it collects reporter Giant Kuroda's gameplay impressions in more detail than the comments occasionally printed in Weekly Famitsu magazine. It's mostly a gameplay introduction for fans new to the series who want to understand what makes Shingen, Kenshin, Kasuga, Toshiie and Matsu unique.

Motonari, Sasuke, Shingen and Rikyuu will appear on regional biscuit packaging too

A few more pictures of yesterday's Country Ma'am biscuit packages have been revealed. They show the characters on the other sides of each box. I'm glad that Rikyuu gets to appear on the green tea flavour after all.

I have to admit I didn't pay all that much attention to today's broadcast as it was Kanbee/Matabee and Maria/Nagamasa on stages we've already seen. It was fun to watch it in the background as I uploaded my Sengoku Basara 4 save after work and wrote this post.

Ojogiri Daa's hair was doing weird things with the green screen they have set up in the broadcast room. 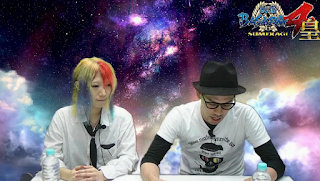 Thankfully, OneSanitarium grabbed some footage of the highlights so I could focus on the goofy parts. 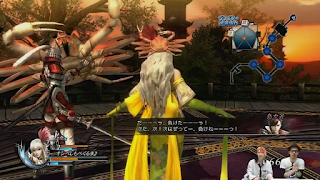 This was the final relay broadcast until 24th July 2015, so it's just next week's NGC and anniversary lives to look out for until then.
at 8:36:00 pm