It's not really a fully-fledged campaign, but a few of my fellow fans have been very supportive of the idea to write Capcom letters or postcards to show that there is demand for English-language subtitles in the Japanese edition of Sengoku Basara 4. If you're frustrated that the game will never come out in English, please think about joining in and sending a short fan message to the team too!

Even if you can't send a letter yourself, it might be good to spread the word through social media services. I sent my postcard this week.

We've already heard that there will be a Sengoku Basara booth at Kyomaf (Kyoto International Manga Anime Fair 2013), and that there'll be a pre-release event for the new Burari, Bushou Futaritabi ~Kyouto-hen~ travel CD at the booth on 7th September 2013. Well, that's not all: Capcom announced today that they're holding a stage presentation at the event at 12:30 on 7th September. Both series director Yamamoto Makoto and producer Kobayashi 'KobaP' Hiroyuki will be there to announce the latest information about Sengoku Basara 4 and Morikawa Toshiyuki (Katakura Kojuurou) will be present as a special guest! Fans who want to see the presentation will have to apply for a lottery drawing on the official Kyomaf website.

Otokomae Tofu will be running a Sengoku Basara 4 tie-in 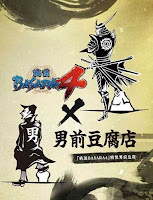 Popular 'manly' tofu brand Otokomae is known for its tie-ins and gimmicky marketing, and today it's been announced that they'll be collaborating with Sengoku Basara 4 for a special promotion!

Like Capcom, Otokomae Toufuten is based in the Kansai area so the two companies have teamed up to create a special 'Sengoku Basara 4 Tokusei Otokomae Toufu' pack for sale exclusively at the Kyomaf venue.

The packaging will feature the tofu company's character 'Johnny' together with a version of Sengoku Basara's Date Masamune drawn in the familiar Otokomae style. The set will contain tofu, tsuyu sauce, an egg and seaweed, all for ¥300. 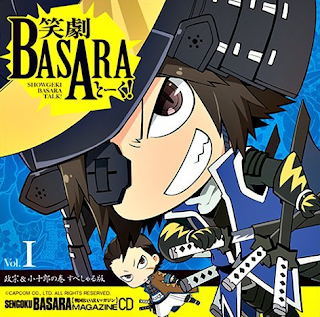 The CD seems to be a 'special edition' of the talk show disc which came with the first issue of the magazine. Though the original was around 40 minutes long, this special edition will extend the runtime to approximately 76 minutes! It will of course be presented by Nakai Kazuya (Date Masamune) and Morikawa Toshiyuki (Katakura Kojuurou), and feature a brand new 'live' drama performance. Other newly-recorded content will include an appearance by Kubota Yuuki, the actor who played Date Masamune in the Butai Sengoku Basara stage plays until very recently. Among other things, Kubota will talk about his graduation from the series.

How much did the seiyuu talk for their session to span across the first two magazines with enough material left over for this standalone release?! I guess we can expect 'special edition' CDs for the future magazine discs, meaning that I'll effectively be buying the same content twice...

Well, it's Sengoku Basara so it's worth every penny.

In a candid comment on the official Manga UK Facebook account, Jerome Mazandarani confirmed that Sengoku Basara season one has sold less than a thousand copies on Blu-ray in the UK since its release in November 2010, making it one of their biggest flops on the format. In other words, it's never broken even in this country when a Blu-ray release required sales of at least 2,400 copies to do so at the time it came out. That's why the second season is DVD-only here.

I don't like the lack of BD for the second season one bit, especially as it means UK buyers missed out on owning several Mini Sengoku Basara Two episodes. It's difficult to blame Manga UK if they would have lost even more money releasing it, though. If only the series was more popular in this country!

The Sengoku Basara stage play website has updated as promised with information about the official JTB tour. As well as the hotel accommodation and tickets, the people on the tour will be given three bonus items: a bromide (official photograph) of the main cast, an original Butai Sengoku Basara 3 Utage Two poster and a pass case. There are various packages available; fans should apply between the 7th and 11th August 2013 to participate.

Itou Ryuu, the artist behind the Sengoku Basara 3 Bloody Angel manga, will be signing copies of Bloody Angel 1-5 as well as Monster Hunter Gaiden: Shuryou Sensen Monogatari for visitors to the e-Capcom shop in Odaiba. The two signing sessions will take place on 11th August 2013 at 15:00 and 16:00; to be eligible for an autograph, you have to have spent more than ¥2,000 at the store between 13th July and 11th August and earned a special ticket.

As a bonus, attendees will receive a drawing by Itou of their choice of character from a set list: Mitsunari, Yoshitsugu, Ieyasu (either the young or older version), Masamune, Kojuurou, Yukimura, Sasuke, Shingen, Motochika, Motonari, Hideyoshi, Hanbee, Kanbee, Keiji, Oichi, Tenkai, Magoichi or Hideaki.

The event is part of the shop's 'Capcom x Akita Shoten: 2 Big Fairs' campaign. The other half of the campaign is for Resident Evil (Biohazard) fans.

Capcom's financial results show that profits are down

This article may be of interest to some. It explains that Capcom's first quarter profits are significantly lower than last year's, hence plans for a company reorganisation and a lot of DLC sales. I wonder if we'll see any DLC in Sengoku Basara 4?

While unrelated to the series, fans may be interested to see artist Tsuchibayashi Makoto's illustration for this November's Kyoto Bakumatsu Festival in Uzumasa. The article states that the picture is of Shinsengumi leader Kondou Isami. Tsuchibayashi is known for producing the original character designs for Sengoku Basara as well as the stylised artwork used in the games.

It's not big news, but KobaP tweeted to Hanbee's new stage play actor saying that there are still 'many' warriors to announce for Sengoku Basara 4. Let's hope we get more details soon!
at 8:09:00 am