I got some nice things in the post today, including the UK release of Cowboy Bebop part 1. The packaging is surprisingly lovely for a UK set. Well done, new company Anime Limited! 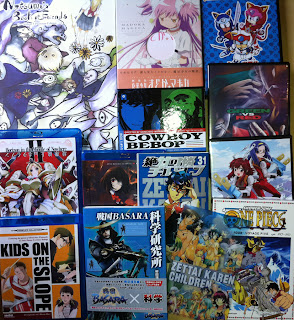 All of the other discs were bought from the US as I favour Region A releases. Unfortunately, it's going to be the last of the large Right Stuf shipments I receive for the foreseeable future; they're an amazing anime distributor, but the company which couriers their packages to the UK is dreadful. This particular parcel shipped on time on Friday 26th July, then arrived in the UK a couple of days later. It wasn't until today that I actually took delivery, though, because local express courier Parcel Force has completely failed to modernise and took a week and a half to clear my package through customs in their usual labour-intensive way.

None of this would be a problem if the shipping prices were in line with the horrible service provided by the courier network - except they're very high, and there's no facility to pay my customs fees in advance so I always end up being charged a hefty fine on arrival (on top of the unavoidable import taxes themselves). I'd rather that extra money went to a decent courier who can provide a better service from now on.

Anyway, the Right Stuf shipment itself was just fine and contained the American Blu-ray versions of Another, Kyoukaisenjou no Horizon II (Horizon in the Middle of Nowhere II), Sakamichi no Apollon (Kids on the Slope) and Natsume Yuujinchou Shi (Natsume's Book of Friends season 4). The 'import' release of the gorgeous Puella Magi Madoka Magica movie special edition was in the box too. The DVD-only sets are Fight Ippatsu! Juuden-chan!!, Kyatto-Ninden Teyandee (Samurai Pizza Cats), Lupin III: Green vs Red and One Piece season 4 part 5. All of this anime should keep me busy for a while.

Two books arrived too: Zettai Karen Children 31 (with clear file) and Sengoku Basara Kagaku Kenkyuujo (Sengoku Basara Science Laboratory). The content in the latter has been revised quite heavily since it was a series of blog entries so I'm going to read it all over again!
at 7:11:00 pm