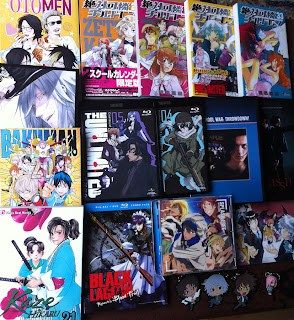 Some English-language manga first of all, with the latest volumes of Black Butler (Kuroshitsuji), Kaze Hikaru, Otomen and Bakuman. They're joined by some miscellaneous Japanese Zettai Karen Children tankoubon, two of which came with special edition extras (a school calendar and rubber straps for the 'Karen GUYs'). I have a full set now, though there's one more special edition item I want if I can find a used copy...

Continuing the Zettai Karen Children theme are the two most recent special edition Blu-rays of The Unlimited -Hyoubu Kyousuke- which both come with character song CDs. The final volume has slipped back a month so it will be a while before my collection is complete.

One of the most exciting items in the picture is Style Five's Splash Free CD single; I can finally take the ending theme to FREE! on my commute every morning! The US combo pack of Black Lagoon: Roberta's Blood Trail and a pair of Japanese movies: An Assassin and High School War: Throwdown! (Gachinko: Kenka Joutou). I ordered them in a wave of emotion back when it was announced Kubota Yuuki would no longer be playing Date Masamune in Butai Sengoku Basara. It seems he'll be playing cool, thuggish guys in both, so I'm looking forward to giving them a watch. People in the US can watch the second film on Crunchyroll instead of waiting months for a print-on-demand DVD to ship from Amazon like I did.

The last item is a free Kuroko No Basuke Momoi charm courtesy of Yesasia.

Now I'd better stop slacking off and finish those two reviews I have in my pipeline. My next deliveries in a couple of weeks are set to include Sengoku Basara Magazine and some rather expensive Comiket 84 doujinshi purchases.
at 3:39:00 pm