Just as promised, Capcom updated the official Sengoku Basara 4 website today with voice samples for Shima Sakon (Nakamura Yuuichi) and Shibata Katsuie (Okamoto Nobuhiko). They sound very close to the way I'd imagined based on the information we had so far; Katsuie's voice is pretty sinister!

Accompanying the voice samples is the brand new Sengoku Basara 4 preview video (direct YouTube link) which was shown for the first time on Saturday at the Busho Matsuri live event. A lot of the content is covered in my previous post thanks to reports from the fans who were able to attend the event in person but that doesn't compare with the experience of being able to see the game running for the first time.


If I was excited about the game before, it pales in comparison to my joy at seeing the characters fighting and speaking together like this.

Famitsu has posted a character summary today to round up some of the details we have so far.

This should be the last of the updates for these characters for the time being, meaning that we may start getting hints about the next round of character announcements soon. While I'd like to see Kojuurou and Hideyoshi have their roles confirmed to make it less confusing, worried fans are understandably praying for Yukimura, Ieyasu and Nagamasa to appear soon. The two missing fan favourites and a proper announcement for Hideyoshi would probably be a good solution for now. If Nagamasa returns, he deserves to headline an announcement so he isn't lost in the commotion which follows the more popular characters.

Edit 20/07/2013: The promotional video is now available with unofficial English and German subtitles. The Captions feature lets you add white subtitles if the default ones are too dark.

This isn't actually news; to celebrate the new video I decided to take a look at how Sakon and Katsuie appeared back in the Sengoku Basara 3 era. Obviously, their designs were as simple as all of the other minor enemy commanders but as soon as I first saw Sakon's knee guards I remembered his kabuto from the previous game and wanted to see it again. Reading YamamotoD's comment about the knee guards this week made it seem like a good excuse to pick up my copy of Utage again for a quick run through Osaka Castle!

Of course, both characters are available as non-playable bodyguards (or allies, if you prefer) in the game, so there's no need to go and find them in battle. It was hard enough taking pictures using a mobile phone so I settled for the bodyguard versions. First are their portraits and shots of Sakon showing off that magnificent kabuto helmet. He wears Mitsunari's family crest on his back. 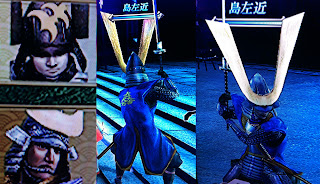 Here is Katsuie, front and back. His kabuto looks very similar to the way it does in Sengoku Basara 4 though his kamon decoration is arranged differently. 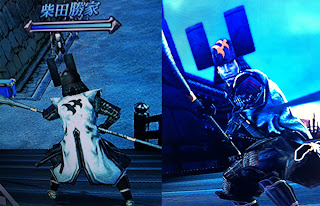 Even though they're not that unique, I enjoy the little details that Capcom took the time to add to the non-playable allies throughout the history of the series. It makes them a little more memorable than simple enemy grunts.

New Sengoku Basara travel CD to be released in September

It's been a very long time since the last Sengoku Basara CD that wasn't a soundtrack or compilation - if you don't count bonus CDs packed in with other items, I think the last was a radio digest CD back in March 2012. That's soon set to change with Frontier Works' brand new release of Burari, Bushou Futaritabi ~Kyouto-hen~ ('Two Warriors Travel Together, Casually ~Kyoto Edition~') which will be released on 25th September 2013 for a pricey ¥2,625.

The CD content is said to be a guide to the local area ('gotouchi annai'), involving Morita Masakazu (Maeda Keiji) and Morikawa Toshiyuki (Katakura Kojuurou) guiding the listener around the famous sights of Kyoto. There will be a special pre-release event at the Sengoku Basara booth at Kyomaf on the 7th September and further details will be announced at a later date.

I'm surprised that this CD is so expensive (the previous series of four travel CDs was priced very low at ¥2,100 per disc). The Amazon listing suggests that this is still just one disc, so perhaps there'll be a more luxurious booklet to go with it than usual? It sounds as though it will be the first volume in a new series of tourism CDs if all goes well. Morita is a natural choice for a disc covering the Kyoto area given Keiji's links to the area in the games, and even though the Kojuurou link is less obvious it makes sense when you consider how well Morita and Morikawa worked together as a team on the old Sengoku Basara radio shows. The Kyomaf event is looking more and more interesting.

This week, Sengoku Basara 4 appeared in 26th position in Famitsu's regular list of the most-anticipated new gaming titles. Hopefully we'll see it climb the rankings as interest in the game increases.

The print collection of the Sengoku Basara Kagaku Kenkyuujo ('Sengoku Basara Science Laboratory') articles has sold out online just a few weeks after it was released back in June. I'm guessing it had a very small print run; hopefully there'll be a second batch produced soon!

It seems that Capcom has recently made two older games in the series available on PS3 for Playstation Network customers in Japan (or those of us based overseas who don't mind being a little sneaky). It's an odd move; both were rereleased in the Sengoku Basara HD Collection pack last year with various extras and improvements. I suppose if your Blu-ray drive is broken or you don't want the additional features, this is a handy way to gain access to the most beloved of the older games for a reasonable price. Perhaps some PS3 owners who don't venture into game shops often will discover the series for the first time?

Now that he's graduated from his role as Date Masamune in Butai Sengoku Basara, actor Kubota Yuuki has taken the time to post a blog entry giving an overview of his experiences since he joined the original stage play. It's a nice way to sum up the last few years.
at 6:11:00 am