Frontier Works' upcoming Burari, Bushou Futaritabi ~Kyouto-hen~ ('Two Warriors Travel Together, Casually ~Kyoto Edition~') CD is being released on 25th September 2013 and we now have a first look at the cover artwork that will be used! The illustration they've chosen by Sengoku Basara 2 manga artist Haibara Yak is gorgeous and well-suited to the subject matter. 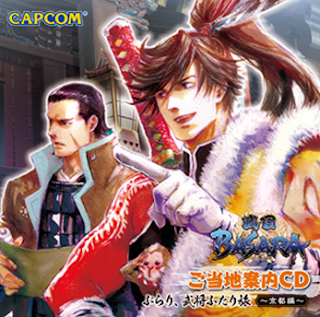 Just one week to go until the Kyomaf event and its pre-release celebration for the CD!

On the subject of Kyomaf (Kyoto International Manga Anime Fair 2013), it seems as though Sengoku Basara 4 tofu won't be the only special merchandise on offer for lucky attendees. Capcom has teamed up with local manufacturers and announced the following goodies: 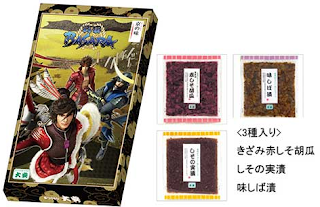 A pack of six varieties of Onomiyasu Kyou-chazuke (Kyoto tea rice) for ¥893. It's hard to tell from the picture but I think the flavours are shibazuke, Mibuna greens, pickled rapeseed, suguki (a Japanese turnip), plum and wasabi. 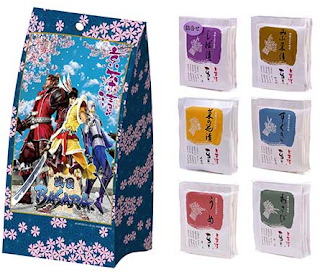 Le Grand Bleu has created seven different 'Kyou' prayer bead bracelets priced at ¥840 each. There are designs for Masamune, Yukimura, Keiji, Ieyasu, Mitsunari, Motochika and Motonari, and if you look closely into the main lens the character will be visible (as demonstrated in the bottom right). 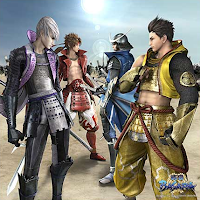 The goods will be available in the event's basement merchandise zone rather than at the main third floor Sengoku Basara booth.

Today's official launch of the Mixi Games version of mobile game Sengoku Basara Card Heroes Matsuri seems to have gone well. There are reports that a 'combination card' system is being added to the game, and there will also be a new time-limited campaign.

Players who participate in a 'late summer party' event running from today until 6th September can earn a special Keiji card for the game as well as Masamune and Yukimura cards: 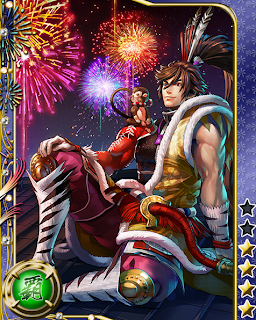 The sudden focus on Keiji makes me wonder if we'll see a hint that he'll 'join the battle' in Sengoku Basara 4 very soon. Kyomaf is just a week away, after all, and he's associated with the Kyoto area...

As expected, the official Sengoku Basara 4 website updated yesterday with character pages for Matabee, Kojuurou, Nobunaga and Mitsuhide. The voice samples are also included so we can hear Matabee speak for the very first time.

However, Yukimura is still missing. I guess he's going to be formally revealed in a Weekly Famitsu article soon then make his way to the website after that. My favourite new pictures are these, especially the first one which implies that we'll see Kojuurou facing off against Hanbee at some point in the storyline. 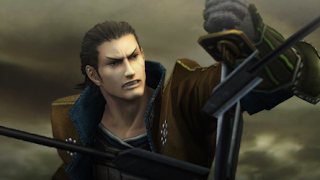 Matabee's facial expression is delightful in this shot, too. 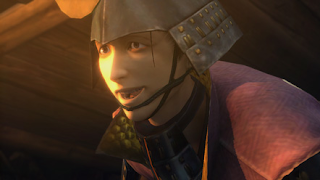 This week's Famitsu rumour was a mistake

I mentioned the rumour that Famitsu had 'revealed' there would be 45 characters associated with Sengoku Basara 4 in an update to my last post. Tousaku has since tweeted that this was an error on Famitsu's part as expected. Thankfully I didn't get my hopes up, especially given the magazine's issues with spelling Masamune's name correctly recently.

New releases for the week: noren and a stage play DVD

The Sengoku Basara noren curtains and DVD edition of the Butai Sengoku Basara 3 Utage stage play should be coming out this weekend. The first batch of DVDs has already been shipped; fans will start receiving them tomorrow. We can expect a renewed surge in interest in the stage play series as everyone settles down to watch the show - it's perhaps especially interesting following the Dengeki PS comments a few weeks ago in which director Yamamoto admitted that they used the stage plays to test new character dynamics.

Speaking of the Butai Sengoku Basara series, there are only two months to go until the next stage play begins its run and a pair of special video messages have been posted to start the promotion for Butai Sengoku Basara 3 Utage Two. The first is from the new cast members: Takigawa Eiji (Date Masamune), Yoshioka Yuu (Sanada Yukimura) and Kawasumi Bishin (Takenaka Hanbee), while the second features Nakamura Seijirou (Ishida Mitsunari), Yoshida Tomokazu (Katakura Kojuuurou) and Murata Youjirou (Sarutobi Sasuke).
at 8:22:00 am