The excitement of Sengoku Basara Magazine issue 2 has yet to subside (and my copy has yet to even arrive!) but already there are a few tiny nuggets of new information to report. Here's a news bulletin to keep everything up to date!

I don't believe that anything new was printed in today's Weekly Famitsu magazine other than the news that the game is now 12th in its Most Wanted chart, however Dengeki Playstation has a few comments from the game's director Yamamoto Makoto alongside recycled announcements from last week's reveals. I'm going to translate YamamotoD's statements here. 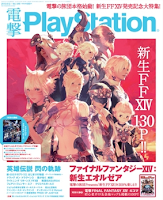 Gotou Matabee
Look out for the first commander in the Basara series with a chonmage (traditional topknot) hairstyle!
Note: I'm ridiculously excited to hear that he's going to have a chonmage. Even though I love the dramatic haircuts sported by the other warriors, I've secretly hoped they'd do this one day. Matabee's hair looked like a short, messy 'all back' style from the pictures so far; now I want to see him remove his helmet (so much so that I even tried to draw what I hoped it looked like)! It's also worth noting that the 'Enma' in 'Enmachou' was emphasised with furigana. 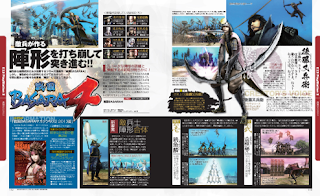 Katakura Kojuurou
He's depicted as though his way of thinking changes after his encounter with Masamune.
Oda Nobunaga
Nobunaga embodied the idea of 'surpassing everything'.
Akechi Mitsuhide
It's worth looking out for the way Mitsuhide treats Katsuie.
--

For the sake of completeness I'll mention an additional remark I spotted in the description of the new Juugyorin formation I talked about in last week's magazine summaries. It wasn't mentioned before but when ten enemy soldiers stack up in the pyramid shape successfully, they'll be bathed in an intense white light 'as though to symbolise their power'.

There's also an interesting picture showing Mitsuhide trapped between two Nobunagas. The Dengeki Playstation caption says nothing more enlightening than "As the pair face off in a Honnouji wrapped in flames, another Nobunaga appears before them...!?". The two seem to be staring intensely towards one another, and it's possible this was the sight which had both Nobunaga and Mitsuhide so shocked in the previous news reveals. Has Nobunaga found a way to clone himself, or is this trickery of some kind, perhaps involving Yoshiteru's shaku weapon? Is the world big enough for two Demon Kings?

For those keeping score, the game has dropped all the way down to 17th place in the magazine's Most Wanted chart (it had climbed to 14th place three weeks ago).


I tweeted about this earlier as ripples of excitement were spreading amongst Japanese fans, and Nine Demons Yoshitaka has posted the details over on the Koei Warriors forum. Ii Naotora is an interesting choice as the series has generally used her popular successor Ii Naomasa to represent the Ii clan. It's great to see indications that a female warrior might be joining the new additions. I hope the rumour is true.

Edit 29/08/2013: It seems that there was a tiny mention in Weekly Famitsu after all. Tousaku tweeted about a small news bulletin describing the Akai Hane/Sengoku Basara 4 charity drive tie-in where it was mentioned that there would be a total of 45 warriors. Before everyone panics, it's worth bearing in mind that the charity campaign starts in October and it's difficult to believe that Capcom will announce another 32 characters within the space of a month. Interestingly 45 is the exact number of playable characters in the series so far if Tenkai and the younger Ieyasu are ignored and Yoshiteru is included instead. It might be that the charity campaign will use a mixture of old and new character artwork and there was a mistake communicating this to Famitsu. I'm not going to buy the magazine for a single line of vague text, but gosh, I'd really like there to be 45 generals in the new game no matter how unlikely it might be!
Edit 29/08/2013: I realised I missed a line thanks to Nine Demons Yoshitaka so I added it to Mitsuhide's description. Oops!
at 9:48:00 pm