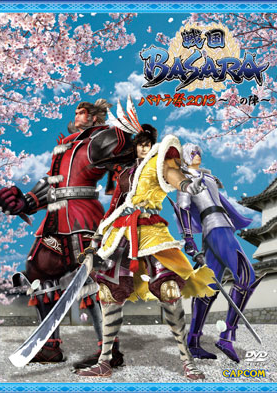 This will be an unusually short review since I already covered most of the event in my full report back when it was all relatively fresh in my mind!

It's also an unusually prompt review, by my standards. The DVD is due for general release on 4th September 2013 priced at ¥5,800, but customers who purchased through e-Capcom, the official fan club shop or Otomart were treated to a special early release starting on the 10th July 2013 instead. Less impatient fans can easily obtain their copies at shops which regularly trade overseas such as Amiami.

Basara Matsuri 2013 ~Haru No Jin~ was a two-day event held on the weekend of the 30th and 31st March 2013, with one performance each day. The venue was the Ryougoku Kokugikan sumo hall within easy reach of the centre of Tokyo. There were 6,000 fans in attendance for each performance according to comments made in the DVD extras.

The most significant thing to come out of this Basara Matsuri was the news that the team was making Sengoku Basara 4. In retrospect, it was rather impressive that the staff managed to sell 12,000 full price tickets to an event with no scheduled announcements at a time when interest in the apparently-abandoned series was slowly evaporating. The power of the actors who appeared on stage as guests cannot be underestimated.

The DVD edition contains footage shot live at Basara Matsuri spread over two discs along with a luxurious 16-page colour booklet full of photographs. The booklet even includes unique studio pictures of the guests shot prior to the event to give it extra value. The cover art was used in the original promotional material too - part of the trend of using pictures of Hanbee to advertise things in which Hanbee doesn't actually appear.

The first of the two DVDs is wholly devoted to the Saturday performance with the other containing Sunday's show as well as some bonus material. The full guest list was colossal. I'll list everyone again for this review, starting with the seiyuu:

There were three special guests on Saturday:

The stage play cast members were out in force as well, with all of these actors from Butai Sengoku Basara 3 ~Setouchi Kyouran~ present on both days:

A brief summary of the disc content follows. Please note that the previous report contains the main summary, so this description is simply a list of differences in the DVD recording (and details I forgot to mention before).

Instead of showing the introduction movie and comical Motonari/Sourin reading of the rules, the first disc jumped straight to the Butai Sengoku Basara 3 ~Setouchi Kyouran~ medley stage play performance. The video quality was very good by DVD standards and all of the excitement of the live show was captured intact.

Next came the seiyuu's live dialogues (with an unexpected appearance by surprise guest Inada):

The two stage play scenes were unique since they hadn't been performed by the seiyuu before.

The two talk shows followed, 'Nishikawa Takanori No Shironomi!!' featuring Wakamoto, Morikawa and Hoshi followed by Okiayu's talk show with Morita, Ishino, Nakahara, Sugiyama and Inada. I already covered these in quite a lot of detail after the live show.

However, the team game 'Competing against the other rooms! Golf...with cushions!' was substantially easier to follow on the DVD, benefiting from split-screen shots each time the team members threw their cushions towards the stage. It was also possible to see the fine details and the Basara Matsuri trophy properly on the video footage.

KobaP's surprise presentation of the latest Sengoku Basara information was much as I remembered it, with him rattling through release details for Sengoku Basara Magazine issue 1, the Tougun/Seigun Best CDs and new card designs for Sengoku Basara Card Heroes Matsuri. The promotional video for the Takarazuka Revue's Sengoku Basara musical was presented in full. KobaP acted as though the big announcement was for the new Busho Matsuri event with the stage play cast, then led into the Osaka vehicle safety campaign Masamune was to promote.

I felt just as anxious watching the presentation on the DVD as I had in real life, even though I already knew that the Sengoku Basara 4 trailer was coming this time. I kept expecting him to declare each news item was the last and leave the stage - then I got goosebumps all over again when Ikeda's Sengoku Basara 4 voiceover began and the crowd started screaming wildly. It's much easier watching at home when you can pause the excitement at any time instead of being swept away!

Next came the second round of live drama performances:

The T.M. Revolution concert which should have come next was cut from the DVD for the usual contractual reasons, so the ending ceremony came straight after the drama readings. Aside from this (and the missing clips right at the start), the DVD footage reproduced the real event faithfully.

Disc two is very similar to the first, except the team game was different and KobaP's Sunday news presentation was removed for some reason. He didn't announce anything new the second time around, so maybe they just needed the space on the disc? I guess I'll just have to remember how amusing it was when he teasingly asked the crowd whether they'd heard the exciting news yet.

The opening movies were missing again as the DVD went straight into the stage play medley once more. The seiyuu dialogues which followed were different to before too:

The crowd roared in delight when Masamune's name flashed up for the third one and again a moment later when Nakai appeared on stage as the secret guest.

Things progressed as before: 'Nishikawa Takanori No Shironomi!!' with Ishino, Nakai and Okiayu led into Morikawa's talk show featuring Morita, Hoshi, Fujiwara, Ookawa and Seki. The Sunday team game tournament was present in its entirety with all of the original cheating, strange gestures and arguing, then there was a gap where KobaP's Sunday presentation should have been. The DVD version moved on straight to the seiyuu's final drama performances instead:

Since T.M.Revolution's concert was cut too, once again the ending ceremony came immediately after the last of the drama readings was over, officially bringing Basara Matsuri 2013 ~Haru No Jin~ to a close. My favourite part of the closing ceremony was Okiayu's farewell where he demanded to know why Hanbee wasn't there and declared that next time he appeared, they'd be there together. I hope he can make that happen...

The main attraction of disc two was the bonus material since it was all new to me. It's been split into two parts which run for a little over twenty minutes in total. The first is titled Back Stage Shots; the camera followed the guests backstage after setting the scene with a few shots taken outside the venue.

This is where the missing 'rules and regulations' announcements were hidden on the discs. Rather than show them at the start of the event footage, they're relegated to the bonus footage so you can see how the seiyuu performed the skits backstage. The stage play actors were watching Nakahara and Sugiyama preparing to open the show with noticeable amusement.

Sugiyama looked nervously excited at the cheering from the crowd as they were about to begin their act, then in an instant he switched to being in character. It's incredible that Sourin's ridiculous voice can come from such a friendly-looking guy. Meanwhile, it was plain that Nakahara was having a great time making the crowd yell on command even when he was backstage and unable to see the results. I like to imagine that he gets the same enjoyment out of it as Motonari would, successfully usurping Aniki's gimmick of shouting to the audience.

Morita chatted to the camera to gave a quick overview of the backstage situation from time to time - occasionally being drowned out by the deafening T.M.Revolution music drifting from the main hall. Thankfully his lines were subtitled in Japanese as well.

Poor Murata was really suffering from hayfever that weekend even as his cruel stage play colleagues stood around watching him trying not to sneeze. Hosogai kept teasing him even after being smacked. Later in the show Kubota said he'd never been happier and fought off tears as he left the stage, though I can never tell how serious he is being because he's so tough-looking (it seemed genuine)...the next time he left the stage he seemed back to his usual quiet self.

The second part of the bonus footage focused on Sunday so we got to see Seki bellowing at Ookawa backstage for their 'rules and regulations' routine. Even mid-performance Seki started grinning mischievously as soon as he saw the cameraman approaching, his facial expression in direct conflict with the voice he was using to respond to Ieyasu's chipper remarks.

Other highlights from Sunday included Hosogai and Ishino setting up a mini 'Aniki call' shout backstage, close-up shots of the giant paper sumo wrestlers each team had decorated and scenes of Fujiwara and Ishino teasing one another. It was so funny rewatching the event and knowing what was going on behind the scenes while we were out in the main hall enjoying the entertainment on stage.

There were an unusually large number of press reports after the event; presumably they'd been tipped off by Capcom about an announcement taking place in advance and made sure they sent enough staff to provide coverage. The most interesting ones I've seen are online at Gamer, 4Gamer, Famitsu, Inside Games, Dengeki, UrePia, RepoTama, Yahoo, KoePota and MyNavi.

Having broken my promise not to write very much, this review completes my summaries of all of the standalone Sengoku Basara live event DVDs released to date. The next one will be the Busho Matsuri DVD later in the year.
at 12:36:00 am