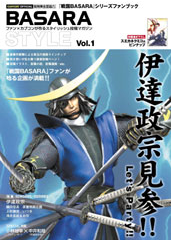 I was originally planning to summarise the whole of Basara Style in a single review since it's ancient, however there ended up being so many interesting pieces of information to include that it would have been impossible to organise it neatly! Please note that some of the details in these reviews will be outdated due to the age of the books.

According to the creators, Basara Style is a 'stylish contribution magazine made by the fans x Capcom'. The format is halfway between being a deluxe magazine and a standard fan book; each volume comes with a slipcover and pull-out posters. The Basara Style series ran for seven volumes in total between late 2006 and early 2009 - effectively covering the whole Sengoku Basara 2 period but stopping before the second major wave of fan activity which was triggered by the anime adaptation and Sengoku Basara 3.

Basara Style vol. 1 was originally released on 21st November 2006, a few months after the arrival of Sengoku Basara 2 on Playstation 2. It's the shortest of all of the books at just 96 pages, and it cost ¥1,260. Date Masamune has the honour of appearing on the front cover.

The fold-out poster in this volume is double-sided, with Masamune's CG artwork on one side and a beautiful illustration of him fighting with Sanada Yukumura on the other. The art is credited to Suekane Kumiko, a mangaka perhaps best known for her character design work in Capcom's Gyakuten Saiban (Ace Attorney) series.

This leads nicely into the main feature: Sengoku Heroes, a set of character introductions with comments from series director Yamamoto Makoto. There are character relationship diagrams as well as detailed explanations of their famous lines, equipment, moves and storylines. Each character's section also includes an illustration by a professional artist, so I'll list the contributions below.

Date Masamune
Illustration: Okamoto Masaki
Includes a column explaining what some of Masamune's famous English lines mean in Japanese so that fans can learn how to use them in everyday conversation.

Oda Nobunaga
Illustration: Ishikawa Hideki
His special column is about the American adaptation of Sengoku Basara, 'Devil Kings'. Nobunaga was made the main character because he's considered to be the most famous Sengoku-era warrior in the west.

Chousokabe Motochika
Illustration: Itsuizumi Mone
Includes an introduction to famous pirates in world history, such as the Vikings, buccaneers, wokou and privateers.

Uesugi Kenshin
Illustration: Okamoto Masaki
Includes information about Naoe Kanetsugu and the symbolism of the ai ('love') kanji on his kabuto helmet, which was said to be an abbreviation of Aizen Myouou (more details). There's also a section about the 'deep-rooted' theory that the real-life Kenshin might have been female. I'll translate that part as it seems to interest a lot of people and this is how Capcom presented it in the magazine: "While it's commonly believed that Kenshin was a man, there are examples of poetry and literature which indicate that he was female. There's even a theory that he was a woman in real life; the famous portraits showing Kenshin with facial hair were painted later on by artists who used their own imagination and there isn't a single picture of Kenshin left which was drawn while he was still alive. Furthermore, with a story circulating about how he suffered from monthly abdominal pains, his gender remains a mystery even now."
Yamamoto added more information in his personal comment on Kenshin's design: "Though we're asked a lot about the matter of Kenshin's gender, even the developers don't know and it's never mentioned. I consider it a taboo area; if you touch a rose carelessly, you'll be pricked by a thorn."

Itsuki
Illustration: Itsuizumi Mone
Her column is about the group of die-hard Itsuki fans from her village who protect her, and there's a section explaining some of the silly jokes in her dialogue like when she addresses Nouhime as the 'demon bride'.

Azai Nagamasa
Illustration: Akutagawa Akira
Includes a large section about the Gohonyari and the concept of justice. The article points out that heroes usually have a rival character, but Nagamasa does not...

Oichi
Illustration: Ishikawa Hideki
Oichi's section is shared with Nagamasa's (since they're a couple), so she doesn't have her own special column.

Yamamoto mentioned that the characters are designed around a 'colour' and a 'silhouette', and he comes back to this several times, noting the similarities between the colours used for Nobunaga and Nagamasa (silver/red). The character selection is a little strange, until you take into account the fact that they wanted to hold back some of the other popular leads to headline future volumes of Basara Style.

The next feature in the magazine is a two-page introduction to the original Sengoku Basara game, then there's a 'special talk battle' between series producer Kobayashi Hiroyuki (KobaP) and seiyuu Nakai Kazuya (Date Masamune). A 'talk battle' is just an interview with a more exciting name than usual. Even though I'm sure other people must have translated this kind of content before, I'll summarise the most interesting points.
After the interview there are no fewer than nine full-colour pages of fan art, followed by another two pages of submissions introduced by guest writer Yumekichi(!). Countless art styles and character groupings are represented in the selections. Cosplay tips and merchandise information follow, then there are another nine pages of drawings and fan letters, a four-page fan fiction story and numerous four-panel comic strips.

The next information column is 'Staff Favorite', which takes a selection of Capcom staff members who worked on the games and asks them about their favourite things. Several of them are no longer with the company so I'll quickly list the odd selection of characters they mentioned as their favourites rather than translating everything.
The next two pages are devoted to the results of a public questionnaire originally posted on the Sengoku Basara 2 website. I love surveys, so I'm going to translate the results in full. First of all is the traditional character popularity ranking (numbers in brackets are the number of 'points' each received, whatever that means):

The results are pretty weird. Aniki beat Yukimura, and somehow Yumekichi beat Hideyoshi. Kenshin isn't even in the list but unplayable characters like the Gohonyari are there with as many points as Nobunaga!

The next poll was for fans to vote on which lines from the game left an impression on them:

Finally, the third survey asked people which military figures they wanted to see in a sequel:

Well, I see that Capcom has so far steadfastly ignored most of those requests!

Turning the page provided a break from all of the statistics with a selection of four-panel manga. The comics featured are Matsu, Mairimasureba!! by Shimanda Kiyono, Saitemidareta Sengoku Ranse by Kikuyarou and Nousatsu☆Sexy Body by Mochizuki Kazuomi.

I was wondering why KobaP wasn't included on the staff page and it turned out that he has his own column later on. 'Kobayashi-Producer's Room' contains the following snippets of information:
The final pages of the book are devoted to a short chapter from Kuori Chimaki's Sengoku Basara 2 Groove'n Dragon manga. This story continued to run in Basara Style throughout its release and was eventually published separately in book form; I plan to review it separately at a later date.

Basara Style vol. 1 is long out of print, though Yesasia still lists it as available at the time of this post. Otherwise, checking used bookstores, online auction sites or Amazon Marketplace is probably the best way to obtain a physical copy of the book. It's surprising how interesting it is to read it again properly so many years after its original publication.
at 12:06:00 am