The 5th September issue of Weekly Famitsu magazine (which comes out tomorrow) has fallen into the hands of some lucky fans in Japan and it seems there are more new characters announced for Sengoku Basara 4.

Strangely there are four characters even though we know we should have five new ones by Tuesday. It makes sense that they're bolstering the Oda army now to prevent the game's theme of 'Sengoku Creation' turning into a one-sided 'Toyotomi Creation', but are they still saving Yukimura for next week's Sengoku Basara Magazine...?

This time we have three returning veterans and one new face. Since one of the returning characters has been made unplayable, can we expect some changes to his move set? It's odd because he was only just made playable again in Sengoku Basara 3 Utage (as his alter ego Tenkai).

It might make sense if there are plans for him to be a paid downloadable character later on; it could be argued that fans can already use him in the previous game which lets the team focus on other characters. In that case, none of the Sengoku Basara 3 Utage veterans are safe from the axe. I'd much prefer DLC to a completely unplayable character.

Gotou Matabee 後藤又兵衛
Character image phrase: 執心流浪 Shuushin Rurou ('Obsessive Wandering')
Seiyuu: Miki Shinichirou
Weapon: Kiba ('strange blade', but pronounced like 'fang'). It's a curved, uneven blade.
Playable: Yes
Description: Originally a warrior in the Kuroda forces, now he drifts around the country of Hinomoto (Japan) with no master. Matabee is very proud and holds a strong grudge against anyone who wounds his pride, vindictively stalking them and writing their name in his 'Matabee Enmachou'.

The screenshots show Matabee launching enemies into the air with a variety of slashing moves, with the caption declaring that whether it's cutting or throwing, he's suited to any kind of battlefield. He can throw his kiba like a boomerang, controlling its trajectory to sweep up enemies in its path.

He's also shown creepily leaping towards Masamune's back, with the caption stating that Date Masamune's name is written right at the top of Matabee's mark book. What kind of grudge could he possibly have against Masamune?

Notes: An 'Enmachou' is a normal teacher's mark book, however the kanji in the word happen to include the name of Enma, the Buddhist god of hell. They are likely playing on this idea to create a sinister character (with a vague Death Note theme?). I'm being strict about romanising and going with 'Matabee' to match 'Hanbee' and 'Kanbee'. It's fine to use alternatives like 'Matabei' or 'Matabe' if you prefer them.

Katakura Kojuurou 片倉小十郎
Character image phrase: 仁吼義侠 Jinkou Gikyou ('Benevolent Roaring Chivalry')
Seiyuu: Morikawa Toshiyuki
Weapon: Katana
Playable: Yes
Description: Masamune's trusted retainer, who also goes by the name "Right Eye of the Dragon". Kojuurou's sword skill has reached the level of a master and he also possesses calm judgement as a tactician. His existence is indispensable to the Date forces. While supporting his lord Date Masamune in proclaiming himself the "Dragon King", he watches over him so he doesn't go off track. Another of Kojuurou's duties is repelling raids by Matabee, who is shadowing Masamune. For many of the commanders - not just Masamune - there'll be more drama than ever before in this game's depiction of the turbulent Sengoku period.

His unique skills can all be modified by holding the button down. Kojuurou protects his lord Masamune with a single katana. As part of his role as the Right Eye of the Dragon, he uses a multitude of unique techniques in quick succession. What is he thinking when he holds the sword engraved with the name "Bonten"?

Note: In the real world, Katakura Kojuurou was said to be responsible for killing Gotou Matabee in battle. This feat would actually have been performed by the son of the original Kojuurou - however, Capcom often blends Katakura Kagetsuna and Katakura Shigenaga together into one character, so it's likely to have relevance this time as well.

"It's an order from the Dragon King...Masamune-sama. I'm going to make every single one of you yield."

Oda Nobunaga 織田信長
Character image phrase: 征天魔王 Seiten Maou ('Demon King Conquering The Heavens')
Seiyuu: Wakamoto Norio
Weapon: Sword/shotgun
Playable: Yes
Description: The supreme commander of the Oda army, feared as the Demon King. He continues his merciless march as though to burn the whole country to ashes and reign over the land of Hinomoto with terror. Disinterested in the matter of Shibata Katsuie's past rebellion, he treats him as he would any other rank and file soldier. With the appearance of the final Muromachi shogun, Ashikaga Yoshiteru, seeing how Nobunaga takes aim at the country will be one of the highlights of the game's drama.

Long range shotgun attacks can be used in normal form, while powerful sword attacks can be performed by switching to 'Rokuma No Ou' form in battle. He demonstrates overwhelming power - as befits the Demon King of the Sixth Heaven. What will happen when the 'Demon King' Nobunaga and the 'Emperor' Yoshiteru come together!?

"I'm the one who conquers everything. The human world... the world of desires...from the sea of heaven to far beyond...!"

Akechi Mitsuhide 明智光秀
Character image phrase: 冷眼下瞰 Reigan Kakan ('Coldly Looking Down')
Seiyuu: Hayami Shou
Weapon: Scythe
Playable: No
Description: The scythe-swinging aide to the Demon King, Akechi Mitsuhide of the Oda army appears as an enemy warlord. Regardless of whether it's a friend or foe, he likes to watch blood flowing and people suffering. This abnormality is also directed at his lord, Nobunaga...

"It's rather noisy... perhaps you won't understand until you're turned into a corpse?"

Some additional notes about the gameplay which aren't specific to any individual character: 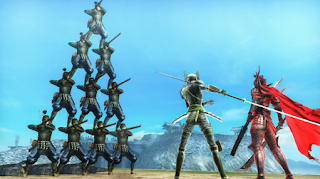 The 'nameless' enemy soldiers are finally getting serious after being nothing more than cannon fodder in the series so far. They'll have 'tacticians' amongst them who can coordinate the others by giving orders. Thus, enemies which were moving separately will join up in a military formation, becoming a powerful adversary and blocking the way. The magazine calls this ability a 'combined military formation' ('jinkei gattai'). The pictures show examples of the formations in action so I translated the captions too - the names are adapted from real-life military techniques, of course.
The game has moved up to twelfth position in Famitsu's Most Wanted charts. It's climbing steadily each time. I noticed that they used the wrong kanji for Masamune's name at one point in the article. 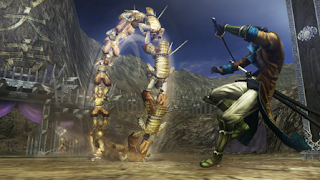 Our next news should either be on Tuesday next week when the magazine launches (unless details leak earlier) or with an update to the official website in the next few days.

Update 21/08/2013 (evening): Added descriptions for everything. Just need some pictures when the official website adds them and then this post is complete!
Update 22/08/2013: The official website has updated so I added pictures of the characters. This post is now complete. The official website will update again on the 29th August to add character pages for the four newcomers.
Update 22/08/2013: Famitsu has posted details from the magazine article on their website, so the descriptions in this post hopefully now make more sense with pictures available too.
at 7:48:00 am