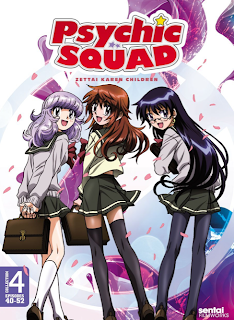 I tried to drag it out as long as I could but it's now time to review the fourth and final volume of Zettai Karen Children (renamed Psychic Squad in the US). Psychic Squad collection 4 is a double-disc DVD set priced at $49.98 which came out back on 6th November 2012. It contains episodes 40-52; the last episode is actually a special since the series finished with episode 51. Once again the extras are sponsor bumpers, clean OP/ED videos and trailers for other Sentai Filmworks titles. There's no English dub for the series so these discs only include the Japanese audio with optional English subtitles.

After the exciting storylines covered by the previous two sets the first few episodes in this fourth DVD collection feel like a step backwards; although we get a few glimpses of the evil Black Phantom in action nothing of importance seems to happen.

This changes towards the end of the first disc when Minamoto comes face to face with an important person from his past, the pretty Caroline 'Carry' McGee. Before long, he's forced to make some difficult decisions regarding Carry and The Children. Then, in a different story, Minamoto finds himself torn between his duties as the girls' guardian and his regrets about his own difficult childhood. Seeing the usually-stoic Minamoto struggling with his emotions adds a new dimension to his character.

Another episode parodies Death Note so heavily that I was certain it was going to be a pointless filler episode. Instead, the creators used it to follow the progress of a pair of rehabilitated espers. A few plot spoilers follow after the jump.

We later meet Momiji, the beautiful blue-haired esper woman from Hyoubu's group who had a prominent role in The Unlimited. Her sardonic personality is refreshing and the episode itself is interesting too: P.A.N.D.R.A. try to use Kaoru to help the newest victim of Black Phantom's brainwashing, potentially pushing her closer to her prophesied future role as the Queen of Catastrophe. Incidentally, the girl they rescue is one of my favourite characters in the manga: Patty Crew, an esper fujoshi who likes to imagine the males of the show in compromising situations with one another. Unfortunately neither Patty nor the Black Phantom plotline have a chance for much more development in the anime series.

Indeed, the final episode of the Zettai Karen Children anime shows a timeskip to the girls' graduation followed by an abrupt end to the show. The unresolved story surrounding the ominous Phantom Daughter who has been lingering in the shadows left me desperately wishing that there was another season to look forward to.

The series' signature blend of silliness and tragedy comes through very strongly once again. Ikyuugo's prediction of an unhappy future is always lingering in the back of Minamoto's mind while the the girls themselves are gradually starting to realise something is wrong. This DVD set increases the emotional impact further by delving into Hyoubu's harrowing past for the first time (this is covered in more depth in his The Unlimited spin-off series).

I was a little disappointed that the amazing Break+Your+Destiny ending theme from the previous set was replaced by a new song sung by the girls for these episodes. The new ending animation certainly fits the tone of the show, but I really enjoyed the balance of having the girls in the opening and the guys in the ending.

Another thing I should mention is that the OAV included in this set is not the single OAV episode which finishes off the Zettai Karen Children anime (for now, at least). It's actually the recap episode from earlier in the series, 'A Grand Banquet! Natsuko and Hotaru's BABEL Report'.

This leaves the 2010 'Aitazousei! Ubawareta Mirai' OAV missing in the US, so I've ordered the Japanese disc (BD LE, BD standard edition, DVD LE, DVD standard edition) before the first pressing disappears for good. Since I wanted the CD anyway this discovery isn't quite as awful as it might have been, though I hope that Sentai will consider releasing the lost episode later if the series becomes more popular. Overall, I'm happy with their discs; besides the missing special, the only thing that would have made it better would have been a Blu-ray transfer. There are some minor typos in the subtitles as with any US anime release these days.

In closing, I'm terribly sad that this is the last of the Zettai Karen Children DVDs. Even though the last batch of episodes never quite managed to be as exciting as the arc which came before them, they were still a fantastic watch. Zettai Karen Children is one of the most underrated shows in Sentai Filmworks' entire catalogue and I hope more people will take a look for themselves. At the very least, I recommend checking out The Unlimited -Hyoubu Kyousuke- on Crunchyroll to get a taste of the series from the perspective of its charismatic villain.