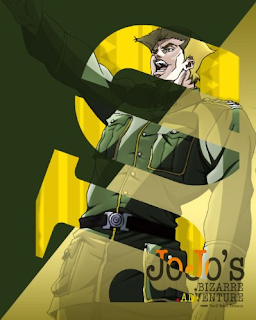 Even though it's taken me a little while to get to this next disc of JoJo's Bizarre Adventure, the fifth volume might be my favourite yet! The arrival of some new characters adds a new dimension to the character dynamics in play.

This fifth Japanese Blu-ray disc contains episodes thirteen to fifteen, the second set of episodes which belong to the Battle Tendency arc.

By the end of volume four, Joseph Joestar had become tangled in a mess much greater in scope than he'd expected when he first travelled to Mexico. His brush with German soldiers and the mysterious Santana has now lead him all the way to Rome, where three more 'pillar men' are said to be sleeping.

I mentioned Joseph's appeal as a protagonist in my comments on the previous disc. If there was one thing missing, it was that he had nobody to react to his cocky attitude and take him down a peg or two; JoJo often ended up talking to himself. Well, this volume takes care of that problem with the introduction of the fabulous Caesar Zeppeli.

Caesar is a good-looking Italian playboy who happens to have a grudge against the Joestar family and a great deal of confidence in his fighting ability. His abrasive personality irritates Joseph right from the start, so it's not long before sparks fly. The big fight between the two contained all kinds of memorable highlights - from kisses to soap bubbles to pigeons. The boundless creativity on display in this series puts many newer shounen manga to shame.

After a rocky start, the two young men end up with the beginnings of a grudging respect for one another. They don't have time to enjoy the peace for long though; they have to follow up on the rumours about the pillar men before it's too late!

It turns out that it's already too late, and the three newly-awoken pillar men are called Kars, Esidisi and Wamuu. The three of them are overwhelmingly powerful, easily crushing the heroes' attempts to challenge them. It's not long before Caesar is injured and Joseph has been marked for death, condemned to either defeat Esidisi and Wamuu within a month or die in agony. And it's with this cliffhanger that these episodes draw to a close, ensuring that the viewer is left desperate to know what happens in the next volume.

These reviews receive a lot of hits from people looking for confirmation that the Japanese Blu-ray release is uncut. As far as I'm aware, this is the most complete version of the JoJo's Bizarre Adventure television series available anywhere in the world. It seems that some scenes have been cleaned up since the original television broadcast and the gory outcomes of battles are clearly visible. I certainly haven't noticed any obvious censorship so far.

The subtitles remain excellent as usual, though I noticed a strange error where a character was described as 'Deutsch' in the Japanese dialogue. This was incorrectly translated as 'Dutch' when it should have been 'German'. While it's a common mistake amongst native English speakers, it's needlessly confusing and should really have been caught in proofreading. This kind of error can be misleading. 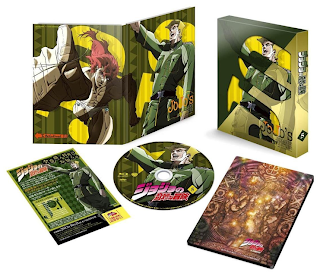 JoJo's Bizarre Adventure volume 5 was released on 31st May 2013 on special edition Blu-ray or DVD. The standard Blu-ray and standard DVD will appear when the first press versions have sold out.

The first press DVD comes with a bonus slip case featuring Stroheim this time. Meanwhile, the first press edition Blu-ray comes with the usual English subtitles and proof of purchase voucher. The additional bonus item for buyers of the first press Blu-ray edition of volume 5 is a mouse pad; it's exactly the same size as the rest of the packaging and shows the three pillar men together with a fancy hologram effect to make it stand out.

On-disc extras are limited to a handful of commercials for the home video release which originally ran on television when the series first aired. The extras for this volume aren't the most exciting, but the content is what I paid for and JoJo's Bizarre Adventure volume 5 delivers a thoroughly satisfying dose of fighting, thrills and camaraderie. Highly recommended.
at 11:24:00 pm