As promised, Capcom updated the official Sengoku Basara 4 website today to add the character pages for Yamanaka Shikanosuke, Toyotomi Hideyoshi and Takenaka Hanbee. All of the new voice samples have also been added this time. Since they're the same phrases that were highlighted in last week's Famitsu magazine, Koei Warriors user Nine Demons Yoshitaka has already translated the samples into English here.

Please note that several English-language gaming sites have mistranslated Hanbee's name as 'Shigeharu'. While it's true that this was his real-life name, for the purpose of Sengoku Basara Capcom specifically uses Takenaka Hanbee - or Hanbei/Hanbe/Hanbey if you prefer a different anglicised spelling.

I consider anything else a mistranslation since the kanji in the magazine articles and website cannot be read 'Shigeharu'. Unless we're going to start referring to all the characters by alternate real-life names then it's best to stick with the in-game spelling. 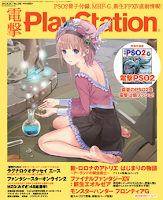 The newest issue of Dengeki Playstation (dated 8th August 2013) is running a small article about Sengoku Basara 4. There's not much new information; it's mostly introducing Shikanosuke, Hideyoshi and Hanbee for readers who haven't been keeping up with last week's news.

Summarising the new senyuu ('war comrades') system which was unveiled last week, the player can choose two warriors to take into battle and will effectively be controlling both with them fighting side by side. Your senyuu will shine with white light, as seen in some previous screenshots, and when they're near the player you can attack together (this still sounds a lot like the allies in Sengoku Basara 3 to me only with a flashy joint attack, depending on how much control the player actually has...).

The player will be able to issue senyuu shirei ('war comrade orders') to tell their comrade which enemies to target. This will add a tactical element and tie in with the 'assessing the situation' mechanic mentioned in a previous article; as the comrade levels up they'll become more useful and learn new attacks. When you use a playable warrior as your comrade, their existing character level will mean you have an advantage since they'll already be stronger (the wording in this part insinuates that non-playable characters will be available as comrades).

Extra information about Shikanosuke to go with the Famitsu details I reported previously:
Director Yamamoto Makoto had some comments about the three newly announced characters:
For the sake of completeness, I should mention that last fortnight's issue (vol. 547) contained a recap of the Busho Matsuri event with no new information at all.

Sengoku Basara 4 is currently in 14th place in Dengeki Playstation's ranking of upcoming titles, up from 15th place last fortnight and 16th place in the issue before. 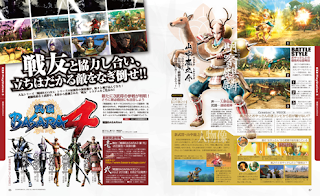 The 4Gamer website and Famitsu websites have posted additional news articles to confirm some of the gameplay information printed in the recent magazines.

Dengeki Playstation also briefly mentions the second issue of Sengoku Basara Magazine, confirming that there will be 16-page report on Sengoku Basara 4. The magazine will be themed around Yukimura with a joint interview with seiyuu Hoshi Souichirou and stage actor Hosogai Kei. Separately, Hosogai will also join Kubota Yuuki, Masamune's stage actor, to discuss their graduation from the Butai Sengoku Basara plays. The price will be ¥2,400 as previously announced, and the release date is 27th August 2013.

We also now know that the magazine will be 120 pages long with tribute illustrations by Haibara Yak and Satsuki Yuu, columns by KobaP and YamamotoD, an interview with the creators about the 'mysteries' of Sengoku Basara 4, new chapters of the two manga from the first issue (Mame Sengoku Basara Shucchouban and Soul Revolution), photo reports from the last three events (Busho Matsuri, the Takarazuka musical, Butai Sengoku Basara 3 Utage) and a Yukimura Chronicle feature. And of course, the rubber Yukimura strap and second Masamune/Kojuurou CD will be as previously reported. Please note that the cover design has still(!) not been finalised.

Interestingly a shop listing states that thirteen warriors will be involved in the main feature, which may mean that we're getting details of those next five Sengoku Basara 4 characters earlier than anticipated.

Fans overseas can now also buy this month's Sengoku Basara Magazine at CD Japan. It's coming up as sold out at Amiami and HMV Japan already, while Amazon Japan and Manga Oh are still accepting reservations. I strongly advise moving quickly if you've yet to secure your copy.

Mame Sengoku Basara volume 4 to be released in September

The Sengoku Basara anime is coming to Italy

Though it may be long finished in Japan the Sengoku Basara television anime is slowly continuing its advance across Europe. While details are still scarce, Manga Forever reported on Tuesday that Yamato Video would be releasing the series in Italian. Fans in Europe have long been able to import the French or English editions but the show has so much more potential when it's given a proper release translated into the right language for its audience. Congratulations, Italy!
at 7:54:00 am