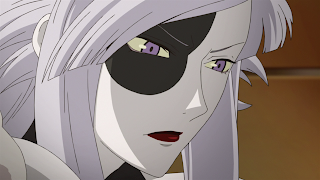 Two noitaminA anime reviews in a row! I just finished my UN-GO Blu-ray set and had to write a few words about it. I originally watched a few of the early episodes on Anime On Demand since they streamed the series last year, but subsequently ended up waiting for the home video release before finishing.

Highlighting the variety that the noitaminA block is capable of, UN-GO is a very different beast to Princess Jellyfish. Set in the near future, Japan has gone through some hard times thanks to war and terrorism. We're introduced to the 'Defeated Detective' Yuuki Shinjuurou and his odd partner, Inga. The duo are scorned by the world at large as they travel around trying to solve crimes, always being beaten to the solution by the celebrated genius Kaishou Rinroku who is reputed to be able to solve any crime without needing to visit the scene. There's something strange about his deductions, though, and the resultant suspicions provide an ongoing storyline to stitch the individual cases together. 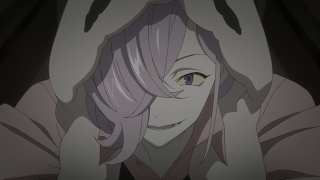 With only eleven episodes to tell its story, UN-GO wastes no time and drops the viewer straight into a series of episodic mystery tales, gradually introducing the various quirks of the futuristic setting over the course of Shinjuurou's adventures. These episodes are standalone, but the world building is necessary as the scenarios become increasingly complex. The mysteries themselves are openly inspired by works by the postwar novelist Sakaguchi Ango, hence the title of the series (UN-GO is pronounced 'Ango' in Japanese). Inga reveals which story is going to be used as the base for the upcoming mystery during the next episode previews, so fans of the author might have some additional hints as to where the story will go. I'm not personally familiar with Sakaguchi's work, but using classic mysteries in a futuristic setting (with some details obviously updated to take technology into account) is a rather clever idea. On one hand, the themes of some episodes are a little different to what I've become used to from modern series, but on the other the way that those themes can be adapted to the new setting so well shows that the more things change in our society, the more they stay the same. 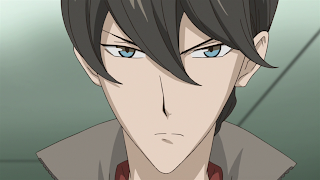 The mystery genre is interesting in its own right, but Bones evidently wasn't satisfied with the strength of the plot and characters alone and brought some major talent into this production to make it extra special. The visuals are perfect with popular artists Kouga Yun and pako contributing distinctly attractive character designs, and the real world settings are vividly colourful. The music is also very well suited to the material it accompanies. UN-GO's opening theme, School Food Punishment's How To Go, is standard pop running on top of a slightly eerie melody, while LAMA's chilled out Fantasy makes for an exhilarating ending song. Toyosaki Aki provides the most attention-grabbing voice performance, switching between Inga's varying styles of speech at the drop of a hat. The role is one of the most challenging I've noticed lately but she nails it effortlessly. Kaji Yuuki also stood out amongst the seiyuu. He seems to be in almost everything I'm watching at the moment, and as his voice sounds not dissimilar to that of my favourite seiyuu, Ishida Akira, I'm not complaining. On a slight tangent I was amused to see that I'm not the only one thinking along those lines: Kaji Yuuki even voices Ishida's character Judeau in the new Berserk movies.

I purchased the Blu-ray edition of UN-GO from Sentai Filmworks in the US, and I'm pleased with it. It included the bonus 'Episode 0' special as well as a plethora of extra content from the Japanese release. The bonus episode fills in the big gaps in the lead characters' backstory; without it, the series feels incomplete. A minor point, but the subtitles for this release also retain Japanese name order and respect (most of the) long vowels, which is rare enough to have taken me by surprise in a good way. Kaze have announced that they'll be bringing the series to the UK in 2013 through Manga Entertainment, but the risk that it will be DVD-only coupled with the delay in release dates convinced me to import. As soon as I saw the series' exceptionally beautiful ending sequence on its streaming run, I knew that it had to be added to my library as a Blu-ray, not a DVD.
at 3:19:00 pm