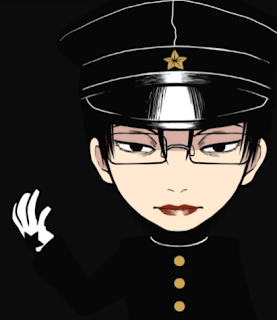 For the sooty industrial town’s lads there's only one point of light: the Light Club, a secret brotherhood they’ve organized in an abandoned factory. They’re on the verge of booting up their crowning achievement, a  "thinking machine" fueled by lychee fruits. At the same time, the middle schoolers' cooties-fearing solidarity is devolving into a downright National Socialist muck of murderous paranoia, perverse aestheticism, and (not always) suppressed homosexuality. Cult favorite Usamaru Furuya’s most flawlessly realized work to date, here is Lord of the Flies for our new century—a text, however, that will never be assigned in schools.

Lychee Light Club is a 2005 manga by Furuya Usamaru, based on a Tokyo Grand Guignol stage play the manga creator saw in his youth. Following the success of this adaptation, the series has recently received a number of spin-offs including an anime, a new stage play and a music project.

Lychee Light Club is best described as dark and theatrical in tone, with particular emphasis on the 'dark'. Its atmosphere is unique; even though nothing particularly bad actually happens in the anime I felt pleasantly uncomfortable watching it. In contrast, quite a few bad things happen in the manga. 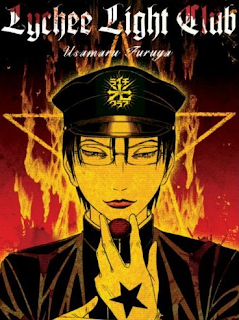 Upon its original western release, I'd originally assumed the series was a gloomy gothic romance based on the art style on the front cover (left) and the 'light' in the title (which I'd misinterpreted as meaning the opposite of 'heavy'). As a consequence I'm ashamed to say that I only picked it up for the first time following the release of the animated series on Crunchyroll.

The plot revolves around a group of nine boys in their early teens. They're students - though this is never explored in depth - and since they're all smartly dressed in matching gakuran their only unique features are their faces, body language and personalities. Although this could be a recipe for reader confusion, within a few chapters I was comfortable identifying each of the characters both by their usual nickname and by the number (in German) which denoted their position in the group.

The boys are still young, even moe at times, awkwardly finding their place in the world without any sign of adult guidance. They're also full of precocious ideas, possessing the resources to carry them out yet none of the common sense necessary to do so in an appropriate way. This twisted scenario turns what would normally be simple boyish pranks into full-blown gory horror in the blink of an eye. Along the way, the manga explores issues of humanity, loyalty, sexuality, society and dictatorship. And it does it all with such superb theatrical flair that I would be tempted to recommend it to Shoujo Kakumei Utena fans - provided that they have a stomach for the grotesque.

Furuya's artistic talents complement the subject matter magnificently. He drenches the backgrounds in black ink to fit the mood, boldly realising the mixture of monstrous violence and beauty on every page. The way he draws the characters has a strange sexuality about it; they're little more than a mob of stupid young boys, but like all young boys they're not as innocent as people prefer to think. There's also an unsettling sense of realism underpinning the over-the-top presentation. As well as the obvious parallels which can be drawn between the manga and real historical events, I felt that I could relate even more directly to the subject matter with the knowledge that groups like the Light Club exist today on a small scale. Creating their own universes within closed communities such as chat rooms and internet forums, every day people all over the world are whipping themselves up into frenzies unchecked by the rest of society.

Going back to the current anime adaptation, it's difficult to say what initially attracted me. It's a series of three-minute-long comedy shorts and to call it 'animated' in the first place is being generous; there's very little motion involved. Thanks to the brevity of each episode, it was easy to get sucked in as soon as I started watching the first and the show swiftly became part of my weekly routine.

It feels a little silly to describe such a bite-sized show in detail, but the designs are appealing - they switch chaotically between serious depictions of the characters and cuter, more deformed caricatures (a doodle of Eins Niko is watching me from my notepad as I type). Even without properly understanding the plot the thick atmosphere came across intact; its stark contrast with other, cuter gag shows might have been why I enjoyed watching so much and why tracking down the original manga was so rewarding. The ending theme song Haikyo No Teiou stands out by being an absolutely perfect way to close each episode. It was composed as part of the Lychee Hikari Club music collaboration project helmed by PENICILLIN's HAKUEI. 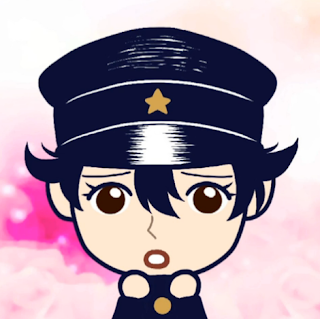 After a few weeks of bemusement and jokes which seemed funny but mostly flew over my head, I decided that I should read the original manga to better understand the strange world of the Light Club. That its weirdness might pique the curiosity of a new wave of fans is probably exactly what the producers were aiming for.

Having now read the manga version as well, I can see that each episode of the humorous anime focuses on a different comical scenario with a vague connection to the original story. It's moderately impressive that they can mine so much silliness out of an allegorical horror manga only one volume in length. The gags are funny on their own and I'm almost glad that I watched the anime first, without being certain that the things the characters were joking about were actually serious issues. It meant that watching it again after reading the manga allowed me to enjoy the first eight episodes all over again.

The anime, Litchi DE Hikari Club, is available on Crunchyroll with new episodes posted every Monday evening. The title is slightly different to that of the manga in Japanese, but both go by Lychee Light Club in English. 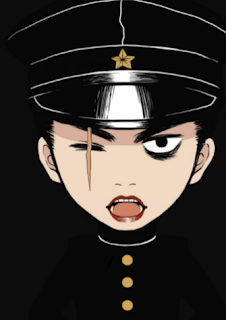 Vertical published the US edition of the manga last year and it can be purchased from Amazon, with the complete tale available in a single book. It's rated 18+ for a reason. The series deserved a good English adaptation and thankfully Vertical's release is superb. There are notes at the back which explain some of the translation choices and the theatrical origins of the story. The translation itself reads smoothly, even with the difficult subject matter, thick atmosphere and occasional German interjections - translations of which are provided separately here for people unhappy with the decision to leave them untranslated (to match the Japanese edition). I only noticed one typographical error and it was a small one.

The publisher mentions in the afterword that they'd love to bring localise the recent prequel series Bokura No Hikari Club if sales of the original are positive. I'd very much like that to happen. Hopefully I'm not the only one to have been drawn into the dark world of the Light Club with its new anime adaptation.
at 3:16:00 pm