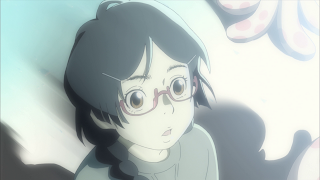 Kuragehime, or Princess Jellyfish to use the official (and completely literal) English title, is a rare gem. It's a series aimed at older females which originally aired back in 2010 in the well-regarded noitaminA block in Japan. Originally created as a manga by Higashimura Akiko, it's been warmly received by both male and female fans overseas. I already knew that it was going to be a special series when I picked it up and now I've finally had a chance to sit down and watch its eleven episodes for myself, it's clear that Princess Jellyfish deserves the praise it gets.

The premise of the show is nothing too unusual: Tsukimi is geeky girl living in a building with other, equally geeky girls. None of them have any social skills or experience with men and they semi-jokingly refer to themselves as the "nuns" (a pun on the name of their building). One day, Tsukumi encounters a trendy, self-assured girl - who happens to actually be a cross-dressing young man - and the resulting culture clash leads to various comical situations. 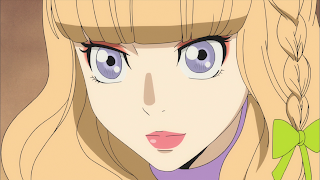 The fashionable male cast member, Kuranosuke, ended up being my favourite character. It's almost as though he's in a different series to everyone else most of the time with his confident world view, but in spite of his popularity he's shown as being very down to earth and likeable. He's also very honest with himself which makes for some extremely entertaining internal monologues. Kuranosuke's stiff older brother was also great to watch, as was his easily-manipulated, heartless chauffeur (voiced by the inimitable Koyasu Takehito).

Naturally, most screen time however is given to the female "nuns" and they're a varied bunch. The main character, Tsukimi, is a jellyfish otaku; although this is a rather obscure subject to form an obsession around, it works because any hobbyist can see parts of themselves in her behaviour, lighting up whenever the topic turns towards marine life and reciting useless jellyfish trivia at every opportunity. She's adorable. Living with her are a train otaku, a traditional Japanese clothing otaku, a Three Kingdoms otaku, a quiet girl obsessed with older men and a celebrated manga artist who neither leaves her room nor speaks. Each of the geeks is uniquely weird - and somehow uniquely unattractive to the opposite sex.

The quirkiness of the cast provides fertile material for jokes, and even the non-otaku characters are hilarious in their own ways. I laughed out loud on more than one occasion at the perceptive interplay between them. Princess Jellyfish is more than a gag series though; it also has an ongoing story, which manages to keep its momentum and reach a satisfying conclusion without relying on a second series which never comes, as so many anime do. The show also packs an emotional punch when it introduces some surprising romantic twists. 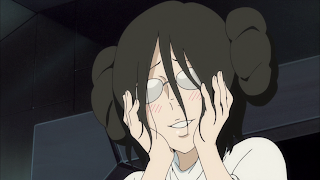 While the music in the series wasn't to my taste, the opening sequence for Princess Jellyfish is noteworthy in its own right. The visuals parody a multitude of famous (mostly western) classic films, most of which even I recognise. The contrast of whimsical fantasy and heartfelt emotion blend perfectly in this series to create something with a great deal of appeal.

Even though it was obvious from the beginning that I was going to like Princess Jellyfish, I was taken by surprise by how addictive it was - I ended up watching most episodes back to back in a marathon because I kept wanting to see what was going to happen next. It's a shame that the older female demographic in the UK is so disinterested in animation because most 'normal' women I know would love watching this if they only knew that it existed. I might buy a second copy to give to my mother for Christmas! 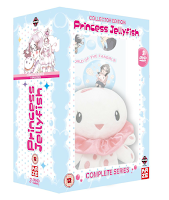 If you're not worried about the lack of Blu-ray, Kaze have released a Collector's Edition of Princess Jellyfish in the UK complete with special packaging and a plush Clara jellyfish toy. I went for the US edition with a Blu-ray option so that's the version to which I refer to in this post. Tsukimi's tale isn't the kind of visual extravaganza which needs Blu-ray, but as with all anime it looks a lot cleaner and more attractive on the newer format. It will be a good thing if the production costs come down enough that the UK can one day support BD as the standard for future releases.
at 2:38:00 pm