It was another exciting day for deliveries!

First of all, Mame Sengoku Basara volume 2 and Gakuen Basara volume 4 arrived. They came swiftly (Gakuen Basara 4 was only released four days ago!) because I'd ordered something else with express shipping and added them to make it worthwhile. Then the item I originally wanted was cancelled but I didn't have the heart to inconvenience the seller by cancelling the books, even though I won't get around to reading them for a while yet. Whoops! 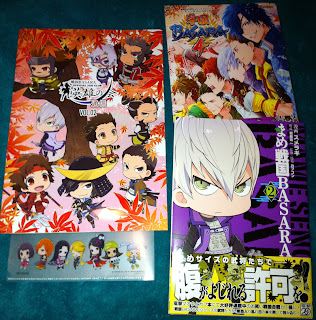 In a separate package, the second Sengoku Basara Official Fan Club ~Eiyuu No Kai~ newsletter finally made it to my letterbox. The cover suits the season very well, even matching the Mame Sengoku Basara book (Sumeragi provided the artwork for both). And best of all, it came with a surprise bonus clear file featuring the ladies of Sengoku Basara in Sumeragi's adorable 'mame' super deformed style. 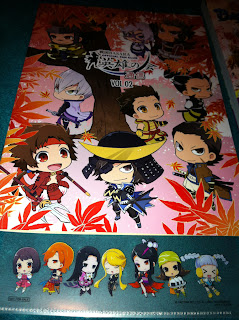 I'm not going to reproduce or translate any of the articles inside, as they're for paying fan club members, but within the newsletter was the preorder information for a very special bonus DVD. The ten day preorder window is extremely tight when the newsletter had to travel halfway around the world before reaching me, so I rushed to participate. The disc is called Fan Kanshasai ~BSR48 Kaihyou No Utage~ and it includes a recording of the fan event way back in January held to announce to results of the BSR48 election, which in turn was held to commemorate the release of Sengoku Basara 3 Utage. A formidable number of seiyuu and butai performers were present at the event, and special behind-the-scenes footage is promised as well. I never thought I'd get to see a DVD of this event!
at 7:16:00 pm