Aside from Christmas shopping I'd been taking it easy, so there haven't been many new arrivals. 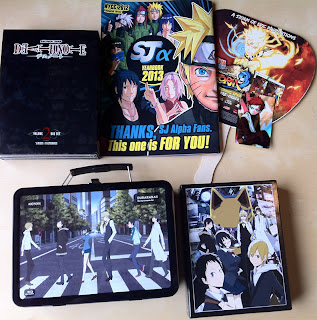 The main new item this week is the Durarara!! Blu-ray box set which came in a BD-sized chipboard art box packed inside a silly but attractive lunchbox. I cannot see myself ever using the lunchbox and it doesn't quite fit on my shelf, so it will probably end up on display elsewhere eventually. Aniplex of America once again pulled out all of the stops to tempt US fans to double dip for this definitive DRRR!! collection. An interview with AoA's president Henry Goto was recently posted on ANN which goes into more detail about their strategy to cater for their niche audience, rather than dropping quality in order to chase a type of casual buyer which no longer exists. May the high quality releases long continue!

On the other end of the scale, the final part of the Death Note anime which cost around $9 finally limped across the Atlantic from Deep Discount. It's silly how much less this NTSC copy cost than the PAL set I purchased locally a few years ago. Come to think of it, both of today's anime acquisitions are double dips.

I also received the Shonen Jump Alpha Yearbook 2013, released by Viz in the US as a special accompaniment to their Shonen Jump Alpha digital magazine. It was pretty cruel of them, because they made it impossible for anyone to buy it without either visiting NYCC 2012 or having a subscription to the digital publication. Dirty foreigners aren't allowed to subscribe.

Fortunately, eBay exists. The seller even threw in a Naruto fan and some kind of unofficial-looking card/sticker. The Yearbook is pretty cool, including Sachie-chan Good!!, a one-shot collaboration by Katsura Masakazu and Toriyama Akira, and the Bakuman。 spin-off comic Otter No. 11 by fictional mangaka Hiramaru Kazuya. There are also some bonus materials and posters. Otter No. 11 was the main reason I purchased the book since I've been on a huge Bakuman。 kick recently. Perhaps one day Viz will round up all of the various one-shots which sneak over to the English-speaking world and publish them in a proper book for the people who didn't go down the eBay route.

I also received another package. 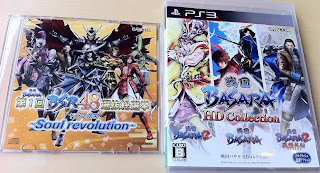 The Soul Revolution BSR48 drama CD is intact, but the survey entry form is no use since it expired two weeks ago. I was a little disappointed that the first press serial codes for Browser Sengoku Basara (Maeda Keiji) and Sengoku Basara Card Heroes (Toyotomi Hideyoshi) were only printed on a slip of paper. I'd been expecting actual cards again.

Anyway, I was so happy that I had to draw my reaction to opening this parcel (using Itsuki, as she's more photogenic than this blogger). 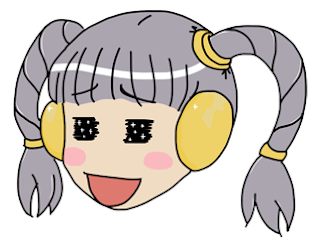 Words alone cannot convey the sense of joy in finally receiving the HD Collection after it had been held up for so long. The box it arrived in had been forwarded from a completely different person before being addressed to me as well; I'm not terrifically impressed if the deputy service screwed up by sending it to the wrong customer and then wasn't transparent with me while I was waiting and nagging all that time.

Anyway, my weekend is going to be fun... if I can bring myself to get past the disc's XMB startup screen which is blasting my favourite theme from the game on a loop.
at 1:35:00 pm