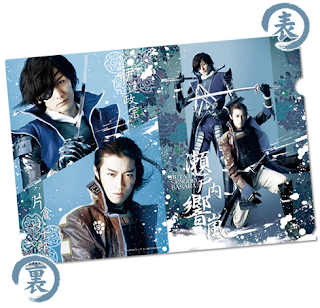 Following yesterday's 'live viewing' of the current stage play, Butai Sengoku Basara 3 ~Setouchi Kyouran~, the staff announced that there would be another stage play late next April, running through to late May 2013. The title of the new show will be Butai Sengoku Basara 3 Utage and tickets will be available in January. The venues for the live performances will be the Canal City Theatre in Fukuoka, the Chuunichi Theatre in Nagoya, Nippon Seinenkan Great Hall in Tokyo and Morinomiya Piloti Hall in Osaka.

As usual, I'm going to miss it! I hope that this means the butai actors will be able to give a little preview at Basara Matsuri in March. Since it's based on Utage, Kojuurou and Sasuke should be getting more time in the spotlight than usual (yay, Yoshida Tomokazu!) and perhaps we will get to see Matsunaga Hisahide for the first time?

Speaking of Yoshida, I was amused to see him with Murata in the promotional photographs for the Ikkitousen stage play the other day. They both look quite different dressed as the boys from Ikkitousen! 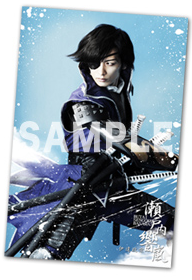 Switching back to Sengoku Basara, the staff have also finally made goods from Setouchi Kyouran available in the Dais online store, including the DVD which comes out in March as a standard edition and a first press. Since the first pressings tend to sell out quickly I'm going to place my order online now rather than wait. The standard edition has one disc with the actual performance on it and sells for ¥6,000 while the first pressing is ¥6,500 and contains another disc with forty minutes of video extras.

In non-Sengoku Basara news, Evangelion 3.0 has finally made its cinema debut and Eva fever is as crazy as ever. On a personal note, I'm most pleased that Utada Hikaru has briefly popped up again to contribute a beautiful new ending song to the movie titled Sakura Nagashi. She's still officially on a break from the entertainment industry but a Rebuild of Evangelion movie without a Hikki song would have been sad. There's an official website for the song here with both Japanese lyrics and an official English translation, as well as a Twitter contest and (for a limited time) a music video for the song. The DVD single will be out on December 26th, a month after the movie's soundtrack hits stores. The song itself has already been firmly planted at the top of the Japanese iTunes chart since it went up for purchase on the day of the movie's debut, and the video has been racking up a large number of views on YouTube. According to Hikki, Sakura Nagashi will be available to buy through overseas iTunes stores soon.
at 11:07:00 am