This series is weird.

When Ixion Saga DT was first announced, it didn't look as though there'd be much reason to take an interest. It's a generic-looking anime based on an online game I've never played. The rather unoriginal premise is that a spunky young lad ends up trapped in a virtual MMORPG world and has to fight his way through it, making friends and standing around looking hotblooded with a sword.

I hadn't realised at that point that Ixion Saga DT doesn't take itself very seriously. 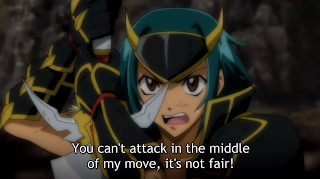 The DT in the title stands for Dimensional Transfer and it's also the hero's nickname, or at least that's the official story; watching the show it became quickly apparent that the staff are having a lot of fun slipping in cheeky references. I have no idea whether the original game is as silly (it's Capcom, so anything is possible) but DT just happens to also be slang for doutei - in English, that's a male virgin. On its own this might be a coincidence, but the lead character draws attention to his lack of sexual experience on more than one occasion to make it clear that the gag is intentional. Furthermore, the opening theme by the bonkers Golden Bomber is called 'DT Suteru', complete with innuendo-riddled lyrics about discarding your DT (or losing it, if you will). The karaoke subtitles emphasise this by presenting a mundane, made-up set of lyrics with the correct, more suggestive ones written in furigana. The real lyrics in turn somehow make the fake ones sound kinkier than they actually are. 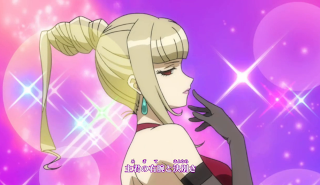 The ending sequence is nothing more than a parade of men in alluring poses, accompanied by another silly Golden Bomber song appropriately called 'Let's Go ED'. ED happens to be the nickname of Erecpyle Dukakis, one of the main villains. Erecpyle is a good-looking man who harbours a seething hatred for the protagonist following a certain testicle-related accident. It's appropriate then that both his name and his abbreviated nickname refer to 'erectile dysfunction'. The episode titles keep things classy with adventures called NK (No Kintama), PK (Pantsu Kuikomu), BL (Boys Love) and HG (Hard Gay?). Of course, all of these abbreviations have official, family-friendly titles, but the double entendre is no accident. The script itself never hesitates to go for the low hanging fruit; jokes about male anatomy are made at every opportunity.

The end result is that the series plays out more like the screwdriver arc in Gintama than a generic fantasy parody should, due as much to the puerile humour as the Monster Hunter references. It also feels a lot like classic Akahori Satoru, even though he doesn't seem to be secretly involved. The characters roster runs the gamut from a traditional burly swordsman (voiced by Nakai Kazuya) to a transsexual maid armed with dual pistols (voiced by Fukuyama Jun). One of the antagonists is played by Sugita Tomokazu to contribute to the Gintama atmosphere, and Kaji Yuuki is also present, of course. Perhaps I should start remarking when I follow a show he isn't involved with. 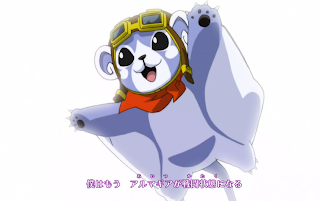 Ixion Saga DT is currently streaming on Crunchyroll, so if you want to lose your DT I recommend taking a look.
at 10:23:00 pm