I'm not planning on buying any of this (at the moment) but I may as well record its existence! I've been a regular visitor to the Capcom news page since the Basara Matsuri 2013 ~Haru No Jin~ event was announced, and since then it feels as though they've been busily posting news and updates for every topic other than that. 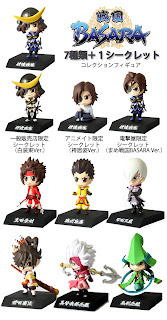 The first news update for the day is that Capcom have updated their website for the release of the latest trading figures, Sengoku Basara Sanzun Bushou Collection #1 ('Elegant Warlord Collection 1'). As previous announced the set comes with seven normal trading figures: Date Masamune, Sanada Yukimura, Tokugawa Ieyasu, Ishida Mitsunari, Maeda Keiji, Chousokabe Motochika and Mouri Motonari. In addition, there are three special versions of Date Masamune. A repaint with white clothing is included if you purchase from a regular shop, while customers buying from Animate (either in-store or online) will receive a special Masamune dressed in hakama, posing like he does in the BSR48 image video. Alternatively, buying the figures from Dengekiya will get you a 'mame' version, as seen in the adorable Dengeki Maou manga series Mame Sengoku Basara.

It will be quite easy to get the regular version from overseas, with retailers such as Ami Ami and Yesasia carrying it. The others may require use of a proxy or forwarding service. 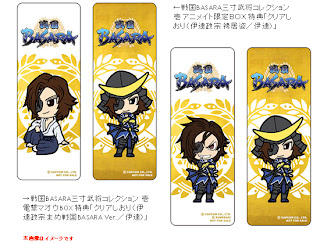 If you want a full set and don't have any friends who strongly dislike Masamune, you'll have to buy three boxes, each from a different shop. At ¥5,880 per box (or ¥735 for individual figures) before fees and shipping, this could be quite expensive. I anticipate an influx of unwanted duplicate figures from the extra sets finding their way onto the shelves at K-Books and Lashinbang in due course. The release date is still approaching but Capcom has now added an extra incentive in the form of a clear bookmark for customers who purchase the boxed versions from the two special dealers.

Personally, I think the original illustrations were much cuter than the figures themselves. 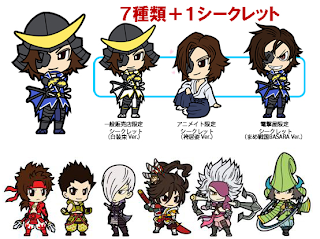 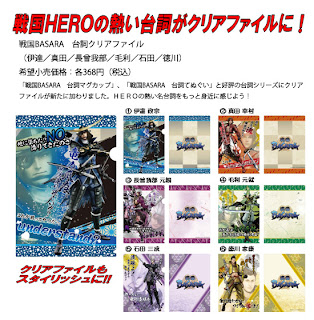 The other news post today was about more merchandise coming out towards the end of November. Matching the style of the mugs and towels which came out a few months ago emblazoned with famous lines from the characters, clear files are on the way for Masamune, Yukimura, Motochika, Motonari, Mitsunari and Ieyasu. They're certainly attractive, but one thing a Sengoku Basara fan will never want for is clear files. I'd never normally import something with such a high shipping cost proportional to its original price, but it's at times like this when I wonder just how much SenBasa stuff my house would be filled with if I lived within a reasonable distance of an Animate store. A chilling thought.

Speaking of the mugs, Motochika and Motonari finally join the other four leads and get their own mugs covered in their famous lines from the games his month. After the trauma of getting my Masamune versions safely back to the UK without damage, I'll pass on these, but it's good to see the Setouchi pair included. Perhaps if Mouri's was covered in more verbal abuse towards the drinker it would be more tempting.

Motochika and Motonari also feature as silhouettes on 'makie' stickers in the next few weeks. These soft stickers are usually used to decorate mobile phones and gadgets, allowing fans to display their love of the show in a tasteful, understated way. There will also be versions for Sasuke, Keiji, and my favourite, Kojuurou...

Well, hopefully tomorrow there will be some actual news about the Basara Matsuri event next year. If not, I might have to post something which doesn't revolve around Sengoku Basara for a change!

There's also only one week left until Dengeki Maou comes out with the promised update about next spring's releases.
at 11:52:00 am