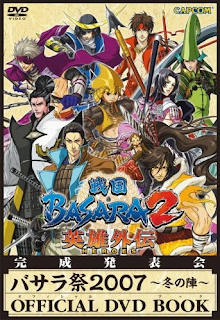 Today's blog entry covers the 2008 release of the Sengoku Basara event report: Basara Matsuri 2007 ~Fuyu No Jin~ Official DVD Book. As the title implies, rather than being a simple video with highlights from the live event it was packaged in a special cardboard case and bundled with a full colour 24-page booklet of extra material. Objectively, the booklet presentation is not as impressive as it sounds; it includes summaries of the event and the DVD contents padded out with some short seiyuu interviews. It's a nice package however and it does make the single DVD feel a little meatier. The set is out of print now but it's easy enough to find used, often at prices significantly lower than the original ¥3,800.

2007 was a big year for Sengoku Basara with the spin-off to the second game, Sengoku Basara 2 Eiyuu Gaiden (Heroes) having been announced in March. Its release was scheduled for November 29th, and consequently this event, which was held on October 28th at Tokyo Big Sight, was putting the finishing touches on months of hype. The Sengoku Basara X (Cross) fighting game had also been announced in July. Although this particular Basara Matsuri was only a one-day event there had been another earlier the same year; the popularity of the Sengoku Basara series had been going from strength to strength.

The bulk of the DVD is footage of the Basara Matsuri event, running to approximately 90 minutes. By today's standards the event was rather small in scale, and it doesn't help that as usual the supporting performances are not included on the DVD version (in this case, this had apparently taken the form of a Taiko drum performance by sibling group Ha Ya To). Instead, the seiyuu were put to work entertaining the throng of excited fans.

The seiyuu guests present were Morikawa Toshiyuki (Katakura Kojuurou), Noto Mamiko (Oichi), Fujiwara Keiji (Matsunaga Hisahide), Ishino Ryuuzou (Chousokabe Motochika), Nakahara Shigeru (Mouri Motonari), Ookawa Tooru (Tokugawa Ieyasu) and Morita Masakazu (Maeda Keiji). Since Heroes was the first game to feature the treacherous Matsunaga Hisahide, this event marked the first Sengoku Basara event appearance from his voice actor. Female guests are also very rare at events for this particular series so it was a pleasure to have Noto on stage; she was very cute when she was shocked or being cheeky to the others. Ishino looks noticeably younger on the DVD (well, it was five years ago!) but his mannerisms are all exactly the same. My favourite moment was Nakahara describing Mouri Motonari as being someone who is very "easy to understand" and "concerned only with himself". His upbeat delivery of the rather damning description was perfectly appropriate under the circumstances.

A lot of the time is spent with various groups of seiyuu gathering together and discussing a multitude of topics tangentially related to the SenBasa universe, from Masamune's English pronunciation to personal anecdotes about themselves and their characters. Some of the gags which cropped up in these conversations ended up becoming running jokes later in the event. Morita even managed to make fun of  Morikawa's ridiculous impersonation of a truck reversing by cramming it into one of his (relatively serious) live dubbing performances later on between Keiji's lines.

My favourite segment was the live voiceover shuffle, where a scene from the game was played first, then seiyuu were assigned unusual roles and forced to act them out without any advance preparation. In the first, a cutscene was reenacted with Ookawa as Kojuurou, Fujiwara as Masamune and Ishino as 'Soldier #1'. The cast rose to the occasion, all making amusing combat sound effects between their lines. Ishino's throwaway soldier role was ridiculously cool.

The second skit involved Morita as Oichi and Morikawa as Nagamasa. Morita's falsetto was silly in the first place, and then they began to ad-lib for extra effect. Both men apologised heartily once the skit was complete, Morita going as far as bowing to Noto for his treatment of her character.

For the third and final skit Fujiwara was cast as Toshiie, Noto as Matsu, Ishino as Keiji and Nakahara as Hideyoshi. The ad-libbing went to the next level once Keiji and Hideyoshi started talking to one another, with both seiyuu continuing to add more and more jokes while keeping within the tone of the series. The dynamic between Nakahara and Ishino is always impressive.

I also enjoyed the team battle segment, where the seiyuu were pitted against one another through a series of versus fights in the game itself. KobaP (Kobayashi Hiroyuki, the series' producer) provided a running commentary.

In addition to the main feature, the disc contains a separate 20 minute segment titled 'Sengoku Basara 2 Heroes Kansei Happyoukai', which was a presentation to open the event and mark the completion of production work on the titular game. It includes clips of Morikawa Toshiyuki and Morita Masakazu dressed in full armour, being carried (well, wheeled) around on plinths by ashigaru soldiers. This is followed by appearances from the guests and some discussion between the seiyuu and KobaP. The segment was very short overall once all of the various introductions had been made, but Kobayashi had enough time to ask each seiyuu for their thoughts about their characters and the new game. 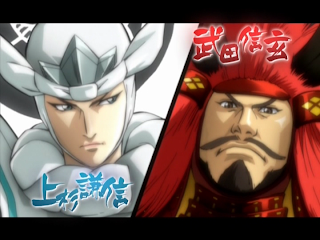 There were also prerecorded video messages for the audience from Nakai Kazuya and Hoshi Souichirou since they couldn't attend the event in person. Hoshi's in particular was very silly and involved him freely switching between a serious voice and Yukimura's overly enthusiastic tone to deliver his lines.

The only extras on the DVD are two promotional videos each for Sengoku Basara 2 Heroes and Sengoku Basara X, as well as extremely short DVD-exclusive messages from Nakai Kazuya and Hoshi Souichirou (plainly both filmed at the same time as their videos from the show itself).

While the event is dated now and the DVD is out of print, it's still a fun watch for any fan of the Sengoku Basara cast. A Famitsu report from the event is still online here.