There's always so much to report when it comes to Sengoku Basara updates.

The main news for today is that the leaked information from Capcom was correct: the famous Takarazuka Revue will be performing a musical play based on Sengoku Basara in the new year (English press release here). The play will be staged by the Revue's Hanagumi and star Ranju Tomu and Ranno Hana, running from June to July in Shibuya's Tokyu Theatre Orb. Tickets go on general sale in April. I have some mild concerns about how some of the costumes will translate to the reasonably dignified Takarazuka format, but overall this is very exciting news. I wonder if they'll stick to the game melodies for the music or incorporate themes from the anime as well? It's difficult to decide which I want more: a beautiful otokoyaku playing Uesugi Kenshin, or a light-hearted story about Ootomo Sourin singing his way through feudal Japan.

The 'Basarazuka' announcement was timed to coincide with the first performance of Butai Sengoku Basara 3 ~Setouchi Kyouran~. It will be a long time before I can see the Butai show for myself, so in the meantime Capcom have kindly released details of the special stage play merchandise to drive fans further into a frenzy. The two stars of the Setouchi region look fantastic in their costumes. As always some items will sell ludicrously quickly and it looks as though they're initially only on sale to those people lucky enough to have a ticket for the show already. There's also a notice on the official stage play website which advises that visitors to the performance can reserve the DVD version when they attend in order to receive special photograph goods.

On the bright side, typing this did at least remind me to check the status of the Tiger & Bunny The Live home video release. It's coming out sooner than I thought on the 22nd November; I must preorder! 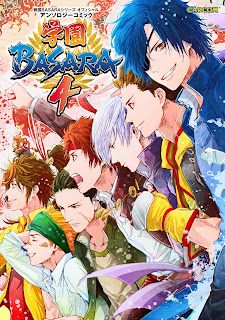 Back to the SenBasa news, yesterday brought us the cover art for the fourth volume of the popular Gakuen Basara anthology manga series and I like the unusual layout a lot more than the previous book's cover. Gakuen Basara 4 is available through any store which carries Japanese books and comes out next week on the 8th November, priced at 1,029 yen.

It looks as though Spring will be a good time to be a SenBasa fan as today Capcom also announced Sengoku Basara Magazine, a premium publication with a lot of special content. More details are due later in the month in Dengeki Maou. There will also be some new Kodansha Box Sengoku Basara 3 novel releases coming up.

That's not all, as Spring will also see the next live event: Basara Matsuri 2013 ~Haru No Jin~ over the weekend of the 30th and 31st of March 2013. The venue this time will be the Ryougoku Kokugikan sumo hall. Guests announced so far are Morita Masakazu (Maeda Keiji), Hoshi Souichirou (Sanada Yukimura), Okiayu Ryoutarou (Toyotomi Hideyoshi) and Ishino Ryuuzou (Chousokabe Motochika). I'm scrambling to check my funds...

It looks as though the next wave of information will be at the end of November, when the follow-ups to most of these announcements are scheduled. Today is also notable for being the day that most applicants for Winter Comiket (FuyuKomi) hear whether or not they will be able to have a space at the event, so to say that the overall SenBasa fan demographic is buzzing with excitement would be no exaggeration.

The other general news is that Sengoku Basara 3 Utage is receiving a priced-down release in Japan on 13th December, just in time for Christmas. On PS3, it's joining the "Playstation 3 The Best" budget line while the Wii version is moving to the "Best Price!" label. Utage is a fantastic game, and even more fantastic at a lower price point. If you wanted more after playing the English adaptation of Sengoku Basara 3 (Samurai Heroes), but were worried about the language barrier importing its standalone expansion, it's now become affordable enough to banish those fears, right?

Finally, the Sengoku Basara fan club "Eiyuu No Kai" (affectionately referred to as "Hideo No Kai" by certain fans) will finally be releasing its second printed newsletter imminently. It's going to contain reports on various events as well as details of an exclusive event DVD. This blog won't be reporting on any of this material directly as it's intended for fan club members only, but on a personal note I'm looking forward to receiving it - as well as paying the EMS shipping fees. The things we do for love.
at 8:19:00 am