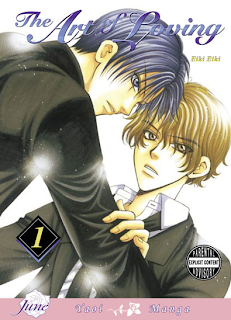 Today I'm going to share a few words on another BL manga from my collection.

The Art Of Loving (Renai Koufukuron) is a 2001 spin-off based on the 1999 manga Color. While Color was a collaboration between Eiki Eiki and her friend Zaou Taishi, The Art Of Loving was created entirely by Eiki Eiki herself. It focuses on two of the minor characters from the previous story, delving into their pasts to unravel the secret history leading up to certain events in Color.

The sulky Yutaka is a good-looking and popular company heir, while Toono is an artist, friendly and sociable at heart yet often misjudged thanks to his rebellious demeanour and bleached hair.

'Dark' is definitely the key word here. At the start of the story, both men are adults. The narrative sets the tone immediately by cynically questioning the role of sex in romantic relationships and whether you can have one without the other. After a brief introduction to the two male leads,we're taken back in time to show how they met back in high school, gradually leading up to a big revelation which explains how these two young men ended up together. BL manga frequently explores darker themes but The Art Of Loving takes things a step further, slowly relishing the build-up chapter by chapter rather than letting it all out in emotionally-charged dialogues between the leads. Eiki Eiki explores Yutaka's complicated adolescent feelings through internal monologues describing the self-hatred and pressure he harboured inside; feelings which only intensify once he meets Toono.

In the extra material which follows the main story, we see Zaou Taishi (Tsuda Mikiyo) complaining about Yutaka's horrible personality as part of her explanation for not participating in this spin-off. It's true that he's difficult to sympathise with, but I think he's a believable character in spite of this. As an aside, in this translation Zaou is incorrectly referred to as male (she only appears in her teddy bear form, but it's unfortunate that the mistake was made).

Eiki Eiki's art improved a lot prior to her work on this book, and the visuals are great with attractive character designs, unless you dislike her distinctive art style. The dialogue is also great; there are only only one or two moments where the plot isn't quite as tight as it should be. Despite this being in the June 'Yaoi Manga' line and thoroughly earning its Mature Content label, there's very little actual BL on show; nobody does anything inappropriate during the high school flashback which makes up the bulk of these pages.

Sadly, although all of the notes in the book frequently refer to a second volume, no such follow-up ever materialised. The story is unfinished, gradually building up into a climax we'll never see.

I have to make a special note in praise of one of the silly 4koma comics Eiki includes at the end of this volume. She mentions asking her now-famous brother, DAIGO, about a very personal matter in the course of her research. Having now read the story which his answer led to, I'm not sure I can look at poor DAIGO in the same way any more.

The Art Of Loving was published in English by Digital Manga in 2006 and it can still be purchased from Amazon, where it's listed under the wrong creator (it looks as though the writer and artist information was copied from a different book, Sweet Revolution). The book is still readily available at a reasonable price and  I think it's fair to say that even though the story was never finished, it's a worthwhile purchase if you're a fan of Eiki Eiki.
at 6:53:00 pm